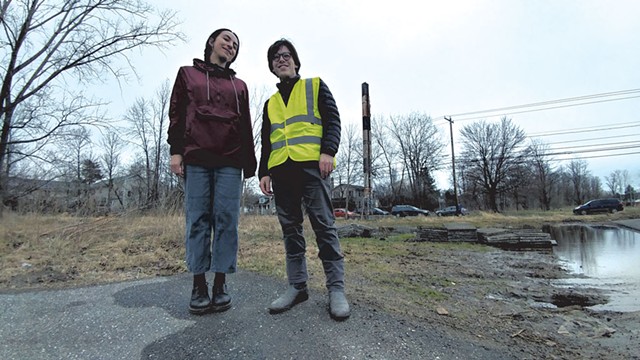 The sculpture "File Under So. Co., Waiting For..." — better known as the World's Tallest Filing Cabinet — has towered over Burlington's Flynn Avenue for more than 15 years. Across the street from the South End's City Market, Onion River Co-op, the 40-foot-tall piece of public art, created by local architect Bren Alvarez, is just what it sounds like: a bunch of metal filing cabinets stacked on top of each other. It's a spectacle, to say the least.

The stack is known to attract visitors, but most snap a few pics or shoot an Instagram story and move on. It rarely pulls a crowd. Last Friday, however, a newly created local organization called Very Cool hosted an event that brought about 40 people to the tower. The purpose? To "worship" the World's Tallest Filing Cabinet.

Very Cool is the brainchild of Mariel DiMidio, a senior at the University of Vermont; and Griffin Jones, a recent UVM grad, both of whom organized Burlington events with now-defunct DIY production company Friends + Family. Just as their former org was interested in fringe music, Very Cool is interested in fringe spaces — particularly public locations that can accommodate large gatherings but rarely do.

DiMidio and Jones created Very Cool in an anarchic spirit. On a whim, they recalled, they decided to post events on Facebook simply to see if they could gain traction. Initially not wanting their names associated with those events, they created Very Cool as a sort of shell company. Retroactively, they decided the letters of the name would stand for "Volunteer Events Reterritorializing Your Community's Oft Overlooked Locations."

"We wanted to make [events] that might not be real to see if we could get people to think [they are] real," DiMidio explained.

This event's description read: "The World's Tallest Filing Cabinet is the obvious center of our community. Various religious groups come here to worship; Burlington's biggest events are held here." None of those claims is true, of course. It continued, "It's time we finally pay our respects to this crucial landmark."

Within hours of the post appearing on Facebook in late March, hundreds of people had engaged with it. By last Friday morning, more than 1,300 people had clicked "interested," while more than 250 claimed they would attend. Given that level of attention, DiMidio and Jones decided to stage the "worship" for real.

Despite rain and a rapidly dropping temperature, a small crowd had formed in the parking lot beside the tower by 6:40 p.m., the event's official start time. Sporting a neon-green traffic vest, Jones hovered near a small bookshelf covered in leopard-print cloth. Others mingled and munched on provided snacks of doughnuts, pizza and homemade veggie burgers.

After 10 or so more people arrived, Jones took his place at the shelf, which turned out to be a makeshift pulpit. He welcomed everyone and began reading selections from a financial-auditing textbook with an air of holy reverence.

"But what about the many third parties who rely upon audited financial statements?" he read without a hint of irony. "How many of these parties may recover their losses from auditors who have performed an improper audit?"

"How many?" a voice in the crowd shouted back.

"Five! Five be the number of auditors who can recover losses from improper audits. Praise be!" Jones shouted. The crowd echoed, "Praise be!"

More and more people trickled in, about 40 at the crowd's largest point.

"Are you here to worship?" folks from the crowd asked new arrivals. "Have you brought any offerings?" Surprisingly, people did have offerings for the cabinet. Some placed produce and other foodstuffs at the base of the pulpit.

As Jones continued, a call-and-response dynamic akin to that of a preacher and congregation took shape. He referred to the sculpture as the pinnacle of orderly goodness in the community. Soon, others took to the pulpit to confess their "sins of disorganization." Some had come prepared, but several seemed genuinely moved by the spirit and gave impromptu confessions.

The group willingly engaged with this new, filing-centric religion. Whether they knew it or not, onlookers were following the first rule of improv comedy: Always say, "Yes, and..."

Jones addressed the crowd again as it grew, his speeches combining religious rhetoric with the kind of motivational buzzwords you might hear in a predatory pyramid-scheme pitch. He claimed that the cabinet monument wants everyone to "get some 'me time,' take it easy and become insanely rich."

Jones then anointed people's foreheads with correction fluid and distributed flat rectangular magnets. Whoever placed their magnet the highest on the filing cabinet would receive its blessings. After about 90 minutes, Jones declared the event complete.

The folks at Very Cool had created more than a public spectacle; this was a fully interactive performance-art piece. If the event's purpose was to bring an eclectic group together to have silly fun, it was a rousing success.

Now Very Cool's Facebook feed is inviting locals to "commemorate the one year anniversary of the construction of the Burlington community pit" on Wednesday, May 1. Will anyone show up? What will happen? Like the CityPlace Burlington construction pit, perhaps, the possibilities are wide open.