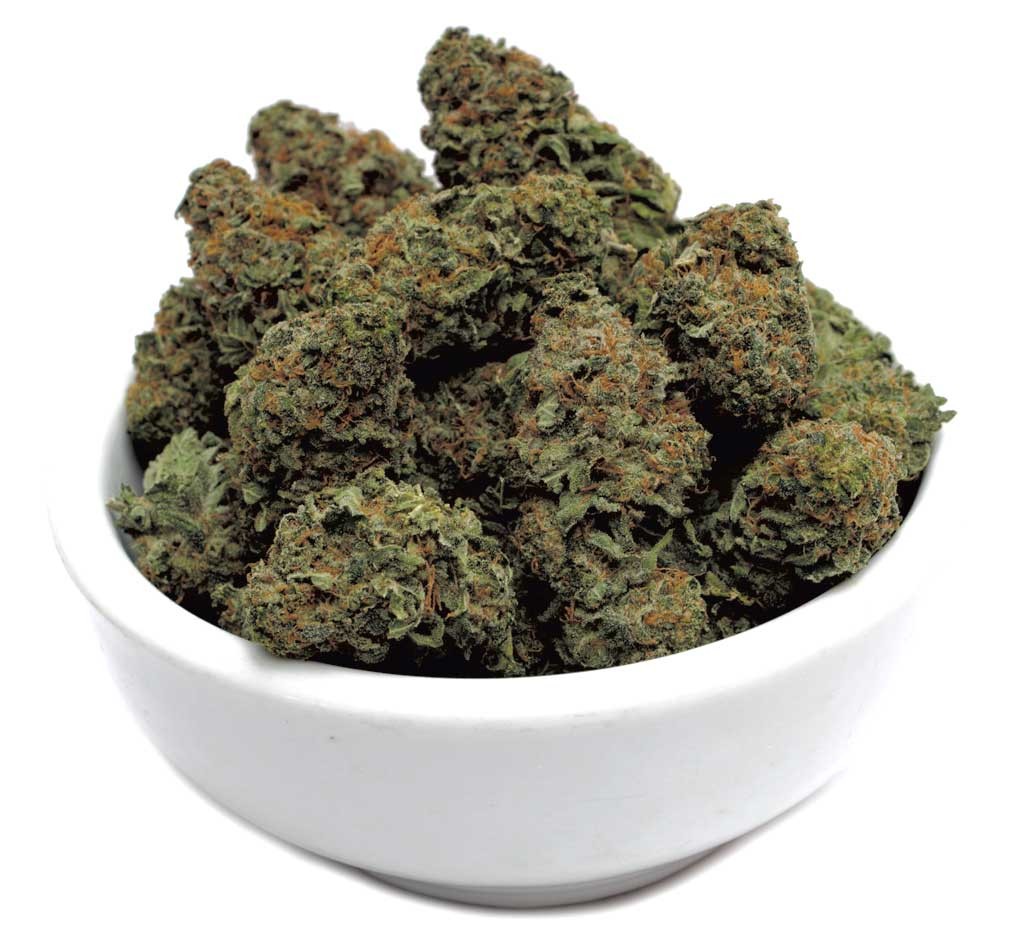 Each day, Bridget Conry takes on a food challenge that rivals anything you'll see on a TV cooking show. Like a celebrity chef, she has to incorporate an unusual ingredient into an appealing and attractive dish. But her tasty edibles are also a powerful medicine for terminal and chronically ill patients, many of whom have severe dietary restrictions and little to no appetites.

"And here's the funny part," she says. "I can't even taste the final product."

Conry, 43, works as the infused products and wellness director at two of Vermont's four state-licensed medical marijuana dispensaries: Champlain Valley Dispensary in Burlington and Brattleboro's Southern Vermont Wellness. Her job is to prepare the foods sold to patients who prefer to ingest their medicinal cannabis orally rather than inhale it. (Many, she says, choose to do both.) Those products include concentrates, tinctures, salves, oils and tea blends, as well as the ever-popular pot-infused brownies and chocolate chip cookies.

Conry, who's spent more than a decade studying traditional herbal medicine, is also a 25-year veteran of the restaurant and food industry in New York and New England. As such, she's fully embraced the farm-to-plate ethos in her role as the two affiliated dispensaries' edibles guru.

Whenever possible, Conry buys her ingredients at farmers markets from local, organic and/or sustainable food producers, including flour from Nitty Gritty Grain Company in Charlotte, butter from the Vermont Creamery in Websterville and maple syrup from Deep Mountain Maple in West Glover. (The cannabis itself is grown indoors by the dispensary's staff at an undisclosed Vermont location.) It's a practice she describes as Vermont's "farm-to-pharmacy" movement.

"Where else," she asks, "is there a medicine that's dispensed in the form of food?"

As a cooking ingredient, cannabis presents some unique challenges, she says. It tends to have a spicy and even bitter flavor profile, which needs to be masked with sweeteners and flavor extracts in order to make the resulting food palatable.

That explains why the medical marijuana menu in markets such as in Colorado has largely been "dominated by sweets," Conry notes, but she's mixing things up in Vermont. In addition to baking pot into candy and other desserts, Conry also cooks up savory foods with higher nutritional yields. Her three-seed cracker, which she describes as "more like an energy bar," contains no gluten or dairy and is good for patients who are undergoing chemotherapy: The cannabis in the cracker improves appetite and reduces nausea, she explains, thus allowing the patient to consume much-needed nutrition to boost the immune system.

Conry also caters to patients who must follow strict diets free of fats, sugar and nuts. For example, cancer patients are often told to avoid processed sugar, as cancer thrives in a sugar-rich environment. Likewise, patients on a no-fat diet must avoid infused butter, which is a very common method for ingesting cannabis. In its place, Conry prepares marijuana-infused coconut oils, olive oils and vinegars, which can be used in salad dressings and marinades.

Only one thing is stopping Conry from offering other savory foods such as pizza dough, pizza sauce and pesto for patients to take home and "have their medicine in their food": a commercial kitchen. The two dispensaries are currently constructing one at an undisclosed location.

Wherever it is, Conry has to operate her kitchen under some of the strictest legal guidelines of any medical marijuana dispensary in the country. By law, Vermont's legit pot providers aren't allowed to admit anyone onto their premises who isn't a patient or caregiver — other than those who have official business there, such as food inspectors from the Vermont Department of Health and registry officials from the Vermont Department of Public Safety. Both make announced and unannounced visits. As a result, Conry wasn't at liberty to grant a reporter a tour of her kitchen or pantry.

How do those legal restrictions affect her work? For one, she says, every gram of plant material must be meticulously weighed, tracked and documented, from the time it's harvested in the grow rooms to its ultimate sale or disposal.

In fact, because food scraps generated by the dispensaries' kitchen cannot simply be composted or discarded in dumpsters, Conry worked closely with the DPS to come up with rules, labels and procedures for recycling it with local farmers.

For a time, cannabis-laced food scraps were being fed to pigs on a northern Vermont farm. The pork producer — who declined to be identified for this story — agreed to label his products with a disclaimer notifying consumers that his animals had consumed medical marijuana plant material. Nevertheless, Conry says the effort backfired when a U.S. Department of Agriculture meat inspector refused to certify the meat as safe for human consumption because the federal government has no rules governing pot-eating pigs.

Conry says that one of the biggest challenges in creating food that's also a Schedule I drug under the U.S. Controlled Substances Act is to provide patients with accurate, consistent and meaningful dosing information. Cannabis is unlike other pharmaceuticals, she explains, in that it's not a synthesized or isolated chemical. Thus, the profile of cannabinoids, which are the active compounds in the marijuana plant, can differ from harvest to harvest, and even from different parts of the same plant.

One part of Conry's job is to advise patients on how much pot-infused food to eat. While national industry standards may recommend that 10 milligrams of tetrahydrocannabinol (THC) — the psychoactive chemical in marijuana that produces a high — is an effective dose, "Every patient is going to have a different reaction to the same medicine.

"So we tell everyone who's approaching our products to go slowly, especially with the infused products," she says. "We'll say, 'Take a few drops of tincture, then wait a while to see how you feel. Do not eat a whole cookie!'"

Conry says such vague instructions can be difficult for some patients to accept, especially those with no prior experience with marijuana. Most Americans are accustomed to a doctor saying, "Take two of these pills and call me in the morning."

Vermont's strict rules governing medical marijuana not only affect how much cannabis patients can consume but also how much they can buy and possess. Currently, Vermont monitors the possession of edibles by what's called an "ounce weight equivalent." By law, every patient can possess up to two ounces of plant material in a 30-day cycle.

So, how do patients convert their legal allowance of green buds to infused tea, olive oil or chocolate chip cookies? Again, that's Conry's job. Under the ounce weight equivalent rule, if she uses 100 grams of plant material to make 10 one-ounce bottles of tincture, then she distributes those 100 grams equally over those 10 bottles. She does the same thing with the butter she puts into baked goods and candies.

While Vermont and several other states still use the ounce weight equivalent method, Conry notes that other states regulate the sale of their medicinal cannabis by measuring the milligrams of cannabinoids in each product. For example, the label on a medical marijuana chocolate bar from Colorado will indicate how many milligrams of THC and cannabidiol (CBD) it contains.

CBD, one of the 66 known cannabinoids in marijuana, differs from THC in that it's effective in treating various ailments, such as epileptic seizures, without leaving patients stoned. Conry says that high-CBD plants are especially useful for treating patients, especially children, who don't want the psychoactive effects. In recent months, Conry has begun working with four different Vermont families whose kids are on the medical marijuana registry. She's been developing a non-psychoactive oil product for them; it's currently in the trial phase.

Other groups are also interested. Conry says she's worked with patients who cannot take opiate painkillers due to addiction concerns.

"It's amazing to hear all the stories about how this medicine is changing people's lives, and them being able to get off their prescription drugs," she says. "They're able to have pain relief and not have that fear."

In fact, one of the most critical parts of Conry's job — in providing edibles to the 345 patients at the Burlington dispensary and the 85 in Brattleboro — is getting their feedback on her products. Both dispensaries have a formal survey process that includes questions about when the patient ate the product, what they ate beforehand, how much exercise they did, what other meds they're taking, how long it took to take effect and how long it lasted.

Patients are also asked to rate, on a 1 to 5 scale, how well the edibles worked to relieve specific symptoms, such as pain, insomnia and muscle spasms, as well as negative side effects, including paranoia, anxiety and dry mouth.

Since Conry can't eat the foods she prepares, does she also inquire if the brownies were too crispy or too chewy?