Vermont's Top Grocery Bagger Is Headed to Vegas for Nationals 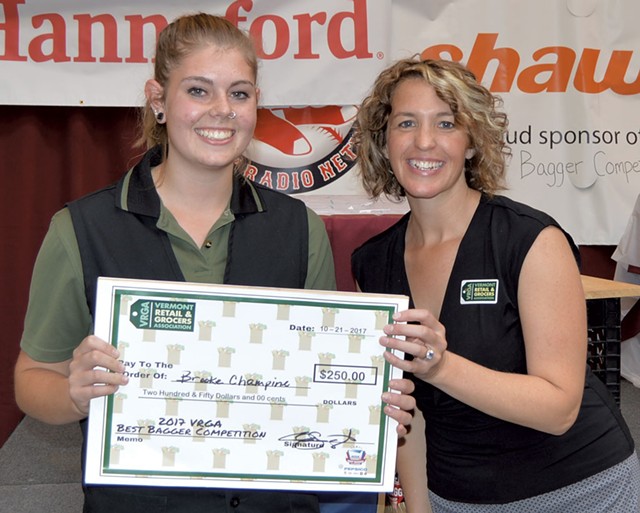 A Danby woman took home the title of Vermont's best grocery bagger Saturday at the University Mall in South Burlington. Brooke Champine beat out 11 other contestants for the chance to compete for a $10,000 top prize at the national championship in Las Vegas in February.

"I'm pretty pumped!" Champine, an 18-year-old employee at the Manchester Shaw's store, told Seven Days. "I've never been to Vegas before, so that should be fun."

"It's an opportunity to recognize front-end staff," Erin Sigrist, the VRGA's president, said of store cashiers and baggers. "They're often the last people you see as you leave the store, and it's a dynamic job that requires a lot of skill and personality and, obviously, some speed. It's a fun event and fun for the public, as well."

Sponsors supplied the 216 pounds of packaged food used during the event; afterward, the items were donated to the Chittenden Emergency Food Shelf, according to Sigrist.

Champine, who said she would use the Vegas prize money toward college tuition, is the latest in a long line of skilled Green Mountain State baggers. The Vermont winner came in second in Vegas two years ago, while last year's state winner came in fifth, Sigrist said.

Champine thinks her experience beating out the best in Vermont will serve her well in February.

"I was nervous being onstage in front of all those people, but I didn't let that get the best of me," Champine said. "Once I started bagging, I kind of just forgot about it."