Mistee Lemons faced an impossible choice during her recovery from opioid addiction.

It was 2018, and Lemons had spent almost two years making a daily three-mile pilgrimage to a methadone clinic in South Burlington, catching buses when she had money, walking when she didn't.

After several years of living in tents and motels, Lemons had made progress in her life: She'd gotten a job prepping ingredients at a chain burrito joint and was able to move into a South Burlington basement apartment. But her shift began shortly after the Chittenden Clinic opened, and though she arrived before sunrise most days to get her medication, she was repeatedly late for work.

But before she could break the news to her therapist, he informed her of a third option: a new program that would allow her to take home a supply of medication. She signed up immediately.

"I would have been back to using. And I'd probably be dead." Mistee Lemons tweet this

Lemons received an electronic medication "wheel" programmed to unlock just a single dose of methadone each day. A cellphone app allowed her to record herself swallowing the pills before sending the video to the clinic as proof that she had. Suddenly, she had hours of her life back. She felt liberated — and, more importantly, she stayed clean.

"I would have been back to using," said Lemons, 43, who is now in her fifth year of recovery. "And I'd probably be dead."

While the take-home program ended in late 2019 when funds ran out, U.S. Rep. Peter Welch (D-Vt.) helped steer nearly $1.2 million in federal money to Vermont that will allow the state to resume and expand it. Within the next year, some 400 people in treatment across Vermont could have a methadone-dispensing device of their own, something advocates say will improve — and possibly save — their lives.

"The past two years have been challenging for so many people, with anxiety and stress levels so high," said Simone Rueschemeyer, codirector of Vermont Care Partners, which supports some of the state's substance-use treatment centers. "We should be doing anything we can do to ease the burden of recovery in Vermont."

Vermont's model for treating substance-use disorders has become a national standard, and the state now has more people enrolled in medication-assisted treatment programs per capita than almost anywhere else in the world. But access to methadone, a highly regulated medication to ease people off opioids, remains a challenge.

Strict federal regulations prevent many people from receiving more than a single dose at a time, and the eight clinics that dispense the drug in Vermont run on hours that don't fit every schedule. The state's rural nature adds another obstacle; reliable transportation can be the difference between staying sober and relapsing.

That's why some see so much promise in the wheel program. Dr. John Brooklyn, who oversaw the pilot program as medical director at the Chittenden Clinic, noted that 60 percent of rural counties nationwide have no opioid treatment programs, and the stigma of addiction leaves some people reluctant to get help. Making treatment more accessible and confidential could be a "game changer," he said, in Vermont and across the country.

Opioid addiction is most often treated with one of two medications: methadone, which has been used for about 50 years, and buprenorphine, which was approved three decades later.

Both act on the same parts of the brain as other opioids to reduce cravings and eliminate withdrawal. And, when taken as prescribed, neither usually produces a euphoric high in people with a tolerance for opioids. But while buprenorphine has a "ceiling" at which taking more won't increase the effect, methadone does not. Significant doses can produce a high and even cause people to overdose.

For that reason, buprenorphine is considered the safer option — and is regulated as such. Buprenorphine patients can get up to a monthlong prescription from primary care doctors, but, under federal regulations, methadone patients must travel to a clinic daily for at least the first few months of their treatment, and many continue the ritual for far longer.

Both medications have a role in Vermont's "hub-and-spoke" system. Patients who need intensive treatment go to clinics, or "hubs," where the vast majority receive methadone. More stable patients can go to primary care practices — "spokes" — for buprenorphine. Doctors can refer patients back to hubs if they need more daily support.

The state treated roughly 10,700 people for opioid addiction in 2019, according to the most recent data. About two-thirds of those were at spokes, while the rest were at hubs.

The federal government temporarily relaxed its rules surrounding methadone during the pandemic, allowing newer patients to get longer-lasting supplies. But it's unclear whether the changes will be made permanent.

The in-person requirement can be difficult for patients with jobs or other commitments. Six of Vermont's 14 counties have no methadone clinic, and it's not uncommon for patients to live a 40-minute drive from the nearest one.

"Imagine if you're really feeling sick, like you have the flu, and the expectation is that you'll get up in the morning, get in the car and sit in the waiting room where you don't know any people," said Heidi Melbostad, director of the Chittenden Clinic, the South Burlington treatment center that acts as the county's hub.

Lemons, who was living in a homeless encampment along Shelburne Road when she began treatment in 2017, walked to the clinic for the first few months because she could not afford bus fare. The daily trip took four hours, she said.

Some people ultimately revert to drugs. Dr. Saeed Ahmed, medical director of the West Ridge Center in Rutland, told Seven Days that he saw three patients in a single day last month who told him they relapsed because they could not get to the clinic.

Despite these barriers, providers say more people seem to be seeking out methadone. Part of that may be personal preference. Some respond better to it; others find the rigid structure of the clinic visit helpful.

The emergence of fentanyl has also played a role. The powerful synthetic opioid, which is up to 50 times stronger than heroin, has become ubiquitous in the street drug marketplace. Heroin is cut with it, cocaine is laced with it and it's even been found in some pills. Of the 210 people who died from accidental drug overdoses in Vermont last year — the most since the state started tracking the figure — 196 people had fentanyl in their systems.

People who use fentanyl for extended periods of time can develop a tolerance that can be hard to replace with the less-powerful buprenorphine. And bupe, as it is called, also interacts with fentanyl in a way methadone doesn't; by dislodging fentanyl from the brain's opioid receptors without producing the same intoxicating effects, buprenorphine can sometimes usher patients who recently used into an immediate state of withdrawal.

This phenomenon, known as "precipitated withdrawal," can make people feel very sick very fast, with symptoms ranging from anxiety and insomnia to stomach cramps, muscle aches and diarrhea. This undermines the purpose of opioid treatment: to keep people feeling well enough that they don't need to use.

Sometimes even that's not enough. "I've seen people who are clean for 72 hours — even four, five days — and are still going in precipitated withdrawal," Ahmed said. That can make it harder for people on buprenorphine to immediately resume their treatment after a relapse.

Researchers are looking for ways to overcome precipitated withdrawal. Ahmed said he has had a lot of success transitioning people to buprenorphine slowly. Such research is still in its early stages, though, and patients remain skeptical. One of Ahmed's patients recently declined buprenorphine — even though she prefers it — because she did not want to risk getting sick. "There's a big reluctance," he said.

As more people seek out methadone, more run into the logistical challenges that almost cost Lemons her sobriety. Brooklyn, at the Chittenden Clinic, has spent years trying to increase methadone access in a way that would reduce travel times and still ensure safety. 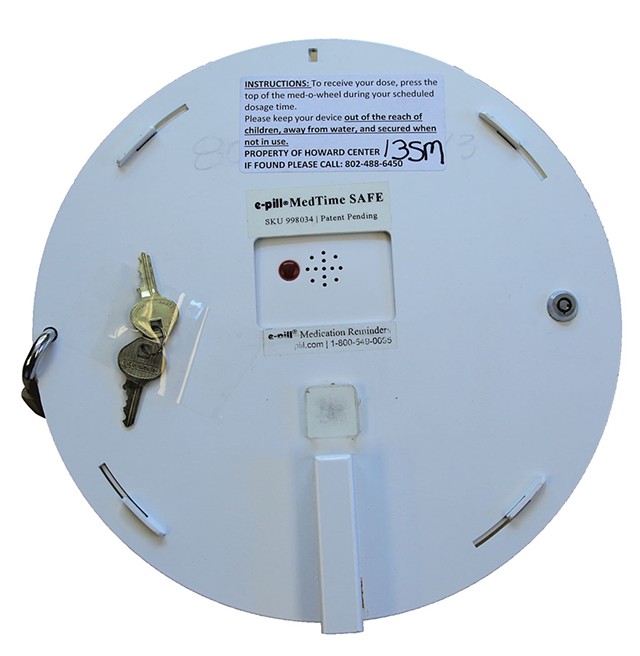 He eventually came across a locked dispenser device that allowed people to bring home larger supplies of buprenorphine. He called the device's manufacturer and learned the company could pair them with an additional security measure — a steel box — that would make it safer for methadone, which is more likely to be misused or sold on the street.

Using federal grants, the Chittenden Clinic purchased about 80 of the devices and subscribed to a mobile app that allowed patients to securely record and send videos. Brooklyn eventually enrolled about 60 people in a three-year study.

The results were promising. Ninety-eight percent of the participants were still in treatment a year later, compared to the South Burlington clinic's typical methadone retention rate of about 55 percent. Half of the patients reported saving at least six hours of travel time and $70 in travel costs each week. Of more than 15,000 videos, only one showed someone intentionally trying to divert the medication.

"What it showed was that you can live far away ... and still do very well in treatment," Brooklyn said.

After the money for the program ran out in late 2019, Brooklyn said he was unable to secure any state funding to continue it. Many participants were able to graduate to take-home methadone doses, though. Lemons, who successfully completed the pilot, now gets a month's supply.

The new federal funding will allow each of the state's eight methadone hubs to distribute 50 devices, for a total of 400 — enough to cover about 10 percent of people who receive treatments at the clinics. Vermont Care Partners, the nonprofit that supports some of the state's treatment facilities, will roll out the program and evaluate its success.

It's not yet clear how big the program could become. Staffing at clinics could help decide, since someone still needs to watch the videos each day. (The company that created the recording app, however, is working on an update that would use artificial intelligence to screen the videos and flag those that appear suspicious.)

The technological aspect might also be too much for some patients, especially those who lack reliable internet.

But if the program could convince more people to stay in treatment — or enter it in the first place — it would be a success, Brooklyn said.

Lemons agrees. The easier it is to seek treatment, the more lives will be saved, she said: "People are scared. They're scared of taking the chance and failing."

"I'm so glad they introduced it to me," she said of the wheel. "Because I wouldn't be here otherwise."

Correction, May 4, 2022: A previous version of this story mischaracterized the role of Vermont Care Partners.