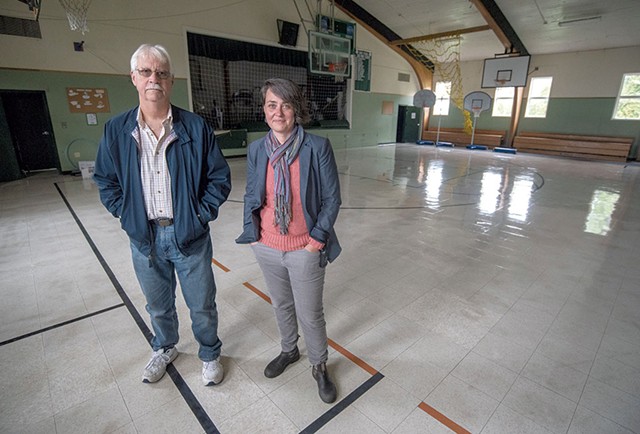 The week before school started this fall, Caledonia Central Supervisory Union superintendent Mark Tucker got a call from the Department of Environmental Conservation. As part of a statewide mandate, the department had tested Cabot School for airborne PCBs, a class of chemicals considered a probable carcinogen. The test found high levels of PCBs around the stage in the school's gymnasium, so Tucker and Cabot's principal, Rebecca Tatistcheff, decided to close the gym.

Since the district would need more testing to find the source of the PCBs in the K-12 school, Tucker contacted the Agency of Education. The legislature has reserved millions for follow-up testing and remediation of the chemicals, and the superintendent figured he could tap into those funds.

Instead, Tucker hit a wall: State officials said there was no process yet for releasing the money to schools. Until one is developed, his district will have to foot the bill.

"This entire process has been an enormous time-sink for the school principal and my office," Tucker wrote to state legislators in an appeal for help last week. "Resolving this problem is beyond the financial capacity of the Cabot School District and I respectfully ask for your earliest attention to this need."

Vermont has only just begun its first-in-the-nation program to test for PCBs in nearly 350 schools. But some school leaders fear the situation in Cabot, where a slow-moving state bureaucratic machine has left the school district in the lurch, is an ominous start to an ambitious testing program that must be completed in the next two and a half years. Questions remain about who pays for the follow-up testing — and the chemical cleanup, if necessary — even as schools have started getting their results.

"We've got a major initiative that is under way ... and yet there's a tremendous lack of clarity with respect to how that initiative is going to be carried out," Vermont Superintendents Association executive director Jeff Francis said. He added that the program appears to be "hitting real operational problems on the front end."

Lawmakers were spurred to create the program after Burlington found high levels of PCBs in the air at its high school in 2020 ahead of a major renovation. In 2021, the legislature allocated $4.5 million to test all school buildings that were built before 1980, when the chemicals were banned. Initially given a July 1, 2024, deadline, state officials later were granted a one-year extension.

After months of delays, the testing has finally begun. Cabot, which was screened over the summer, is one of just six schools for which the state has test results.

For the time being, gym class in Cabot is taking place outside, but that won't be a reliable option when the temperatures drop next month. The gym is also used year-round by the community for social gatherings, sporting events and voting on Town Meeting Day.

Meanwhile, in Burlington, the district closed its contaminated high school, moved its students to a former Macy's department store in downtown Burlington and is asking voters in November to approve a $165 million bond to build a new school.

The state hopes no other district will require such drastic measures, but it's a possibility. Most school buildings in the state were built in the 1960s and '70s, when PCBs were part of such construction materials as caulking and tile glue.

For now, the state has allocated $32 million to pay for further testing, remediation and removal of PCBs, but it's still unclear how that money will be distributed and what would happen if it ran out. That's left school officials on edge.

"From a school district's perspective, they should not be charged with trying to find money to [remediate PCBs] when it truly is circumstances unforeseen," Francis said.

The slow start to the PCB testing is sharply different from a similar statewide testing initiative for lead in school drinking water. The Vermont Department of Health recently called that program a "success" after the state tested more than 15,000 taps and drinkable water sources in schools and childcare centers between June 2019 and December 2021. Faucets with high levels of lead — roughly one of every five tested — were replaced, at a cost of less than $500 per fixture.

The logistical and financial parameters for the lead testing program were well-defined by the legislature through multiple weeks of deliberation, Francis said. The PCB testing initiative, he added, "is not well-defined in any regard."

Some of that may have to do with the nature of the testing programs. Dozens of states have done school-based lead testing and mitigation, while Vermont is the first in the country to attempt a similarly large-scale search for PCBs.

While the $32 million for the PCB program resides in the state's education fund, the legislature gave the Agency of Natural Resources, the Agency of Education and the Department of Health joint responsibility for carrying out the work. They have until January 15, 2023, to submit a plan to the general assembly for how the money will be distributed. But the legislation also says that "in the event of a significant health threat" due to PCBs, the Vermont Emergency Board is authorized to release $2.5 million of that money between July 1, 2022, and January 15, 2023. The governor and the chairs of the legislature's four money committees sit on the body, which is known as the E-Board.

Sen. Jane Kitchel (D-Caledonia), an E-Board member, said Tucker reached out to her directly to ask for help, and the panel discussed whether it should allow Cabot to use some of the $2.5 million.

"This is not a research project ... It's impacted the operation of my school." Mark Tucker tweet this

However, she said, her reading of the law requires all three state agencies — natural resources, education and health — to agree that the PCB contamination constitutes a significant health risk. Only then can they ask the governor to call a meeting of the E-Board to authorize release of the money.

Kitchel said the $2.5 million was meant to address "extreme conditions," and she's not convinced that Cabot's problem fits that definition. She worries that by giving Cabot the money, legislators would risk setting a precedent of funding every request that comes to them, without any criteria to go by.

The lack of a clear process for distributing the money provides little solace to educators, who fear being disrupted by a state-mandated program, without any backup from state officials.

"This is not a research project, which I think the legislature thought they were doing here," Tucker said. "It's impacted the operation of my school."

Patricia Coppolino, senior environ­mental program manager for the Department of Environmental Conservation, acknowledged that the PCB testing has gotten off to a slow start. But she said the state will use what it has learned from the first batch of schools to refine its process. So far, the state has begun preliminary work at 30 schools, but results are back from just six, with some still being analyzed.

Consultants have also identified elevated levels of PCBs that will require more testing in two classrooms at Oak Grove School in Brattleboro, though students can still use those rooms. That school district, Windham Southeast Supervisory Union, is working with consultants to create a follow-up testing plan but does not have a cost estimate yet.

"I think, at the start of any new program, you're going to expect there to be some learning [that] happens," Coppolino said.

In Cabot, for instance, the school's air handling system wasn't running when testing was done over the summer, meaning the stagnant air might have inflated the PCB readings. That's led the district to bring back consultants this week to retest the air.

Cabot's rocky experience might lead to a smoother one for other schools. On September 20, Natural Resources Secretary Julie Moore and Education Secretary Dan French sent a letter to the Joint Fiscal Committee — a group of 10 legislators, including the E-Board members — stating that they will "soon" request access to the $2.5 million set aside for PCB mitigation. The officials said they'd like to control the money so they can "provide flexible funding to schools to allow them to move quickly to identify sources of PCBs and develop and implement mitigation strategies," while minimizing disruptions.

In an interview last Thursday, Moore said it's unclear when they'll make a formal request. While there are some "pressing situations" in Cabot and Brattleboro, she said, she didn't believe they required immediate attention.

In the meantime, engineers will come to Cabot this week to start PCB testing of building materials such as caulking and paint, work that consultants say will cost around $32,000. Any materials containing PCBs will need to be remediated or removed, which will add to the bill.

Cabot did get some potentially good news recently. New guidance from the Department of Environmental Conservation suggests that the district could reopen its gym, as long as mitigation measures are under way. Originally, guidance from the state indicated it would only be OK to use that space if remediation were completed within six weeks, which Coppolino said the state reevaluated after receiving feedback from schools.

But the advice has left Tucker more perplexed than reassured — and uncertain about how to explain it to his school community without confusing them, too.

"I think as this unfolds, [state officials] are realizing that the original guidance was too strict, and they're trying to back off a little," Tucker said. "But that cat's already out of the bag as far as Cabot is concerned."

Correction, October 7, 2022: A previous version of this story misstated the timeline for the statewide PCB testing.