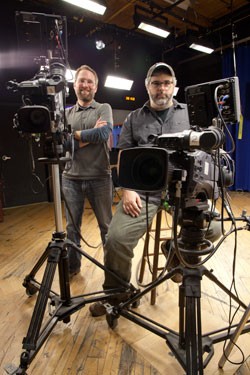 When opposition researchers wanted to dig up dirt on presidential candidate Howard Dean, they went to the studios of CCTV, the Burlington area’s government-access channel.

There, inside a narrow closet next to the equipment room, political operatives found a video archive of almost everything produced since CCTV launched Vermont’s first public-access channel in 1984. The VHS tapes lining the walls contained hours and hours of footage documenting Dean’s 11 years in office — a treasure trove for campaign operatives and political reporters mining the past of an unlikely White House contender.

Today, that Times article is framed on the wall of CCTV’s production studio in Burlington’s Old North End, a reminder of what Davitian sees as the value of public-access TV. Over its three-decade run in Vermont, community television has become a sort of library for democracy, a place where people of divergent backgrounds can congregate, collaborate and record the history of their time.

But, unlike libraries, public-access channels don’t get their funding from the taxpaying public. They get it from “franchise fees” paid by cable subscribers — about $3 a month on a typical cable bill. Rapid changes in the cable industry and the way people watch television could threaten that funding source and, ultimately, the very existence of public-access TV.

Davitian even has an apocalyptic-sounding name for this uncertain future: She calls it the “doomsday scenario.”

When that happens, she says, those franchise fees paid by cable subscribers could disappear. Cable companies have wanted for years to ditch that cost of business to make themselves more competitive with satellite TV providers, who aren’t subject to franchise fees.

Each channel raises some money from donations, grants and fee-for-service production jobs. But it’s nowhere near enough to cover the loss of their primary funding if that were to vanish.

So three years ago, CCTV, RETN and VCAM came together to begin working more collaboratively. Last week, heads of the three channels met again for a strategic planning session. One point of agreement: Public-access stations must start planning for a time when cable fees cannot sustain them.

“We need to start having the doomsday scenario conversation,” Davitian says.

Public-access TV has come a long way since its founding in the early 1970s as an “electronic soapbox” for average citizens to air viewpoints not available on commercial cable. Vermont now supports 25 community television channels. The three serving Chittenden County produce and air hundreds of hours of original programming each month and serve as training grounds for aspiring filmmakers, broadcasters and video hobbyists.

The stations have also added national and international public affairs shows to complement the local offerings. CCTV airs “Democracy Now!” twice daily. RETN airs Al Jazeera English. All three have upgraded to high-definition cameras and editing decks and are experimenting with producing video on smartphones and other mobile devices.

But Steven Shepard, a Williston-based author who has written several books on telecommunications and technology, says public-access TV still suffers from outdated perceptions. “A lot of people, when they think community television, they think of those two weird guys sitting on a couch, smoking dope and talking about marijuana,” says Shepard, who served on CCTV’s board from 2005 to 2011.

Such misconceptions persist, Shepard says, because public-access stations historically have done a poor job of telling their own stories and explaining why they serve a vital public need.

“They don’t market because they’ve never had to market,” he says. “If these stations at large made a huge effort to justify their existence through the public, through social media and advertising, maybe a speaking circuit, maybe suddenly the market will say, ‘These guys are important. They deserve a place at the table.’”

Shepard thinks Davitian’s doom-and-gloom future is likely and guesses major changes in cable regulation could be as few as five years away.

Public-access TV has survived existential threats before. When YouTube hit the scene, the question Seven Days and other media observers posed was “Does public-access TV still matter in the YouTube age?” Almost overnight, anyone with a webcam had become an amateur filmmaker or citizen journalist, and YouTube provided an easy, free and popular distribution channel. Some predicted the innovation would make public-access TV irrelevant.

But staff at the Burlington area’s three public-access channels say the opposite has happened. The ease of producing video has made more people interested in learning to do it well. “There’s more people coming in with ideas than in the past, because they have a blog or they know they want to put out a video,” says VCAM executive director Seth Mobley.

At RETN, staff teach a three-credit grad course on video to local educators who want to keep up with their students, says executive director and program manager Scott Campitelli.

“Video is the language of 21st-century America. This is the language that kids speak,” says Campitelli, a former middle school teacher in Essex and St. Albans. “They need to know how to do math, write and read. But they are as likely in their future to have to walk in and do a media presentation in their job interview.”

Public-access TV is increasingly focused on training people in communication skills, along with the nuts and bolts of production. As Davitian points out, there’s more to making good video than simply whipping out a smartphone and hitting record. “Just because you have a television channel in your pocket doesn’t mean you know how to communicate effectively,” she says. “We need to become effective communicators to persuade people.”

RETN’s Campitelli agrees. “Our real goal is to teach people skills and give them tools to have a voice. It’s all about civic discourse.”

“The tools everyone is using are still not accessible to a large number of people in the community,” Mobley says. “Having a place where they can come in and learn this stuff and have access to the tools that everyone is using on a daily basis makes [community media] centers unique.”

But would TV viewers even notice if public-access stations disappeared? For a lot of people, the city council meetings and homespun shows on public access are channel-surfing speed bumps on the way to ESPN, HBO and other commercial networks with slicker programming.

Community television doesn’t show up on Nielsen ratings, and the stations themselves can only guess at their viewership. CCTV’s Davitian cites a 3-year-old survey by Comcast that found 30 percent of Chittenden County’s cable audience, or about 10,000 households, said they had watched local-access channels during the previous month. RETN’s Campitelli guesses the number is closer to 20,000 but admits he can’t be sure.

Whatever the number, Davitian and her counterparts want to make sure the channels are around to serve the public — and democracy — for the long haul. How exactly they’ll pay for it, should her doomsday scenario come to pass, is an open question. But there’s no shortage of ideas.

Davitian says the channels could pursue the Vermont Public Radio model — gradually turning viewers and volunteers into donors through public engagement. Of course, pledge drives might be less effective when they’re interrupting development review board meetings and discussions of Israeli-Palestinian relations, rather than “Car Talk” or “Wait Wait... Don’t Tell Me!”

At present, CCTV gets about $10,000 a year in donations — a fraction of its $500,000 annual budget. VCAM and RETN get even less. But Davitian says fundraising must play a larger role in the stations’ futures. One reason she recently hired Matt Kelly as executive producer and channel director was his background in commercial radio.

“He’s the smiling dialer,” Davitian says. “He knows how to sell.”

Likewise, Mobley says VCAM is considering hiring a full-time fundraiser. “It would be entirely new for VCAM,” he says. “But all the forward-thinking [public-access] centers around the country are doing it, and all the rest of us are realizing it needs to start happening.”

Campitelli says RETN will also be asking people to donate.

Already, CCTV is diversifying its services as a hedge against funding uncertainties. Five years ago, it launched Common Good Vermont, a grant-funded website and training program that instructs nonprofit leaders in strategic communications.

Campitelli says that, if cable funding gets reduced, public-access stations will have to get more creative and won’t be able to provide as many free services. While paying for access runs counter to community media’s philosophy, he says stations like RETN may have no choice.

“We’re really interested to see how supportive the community will be,” Campitelli says. “How valuable do people think we are?”

The print version of this article was headlined "Keeping Watch".