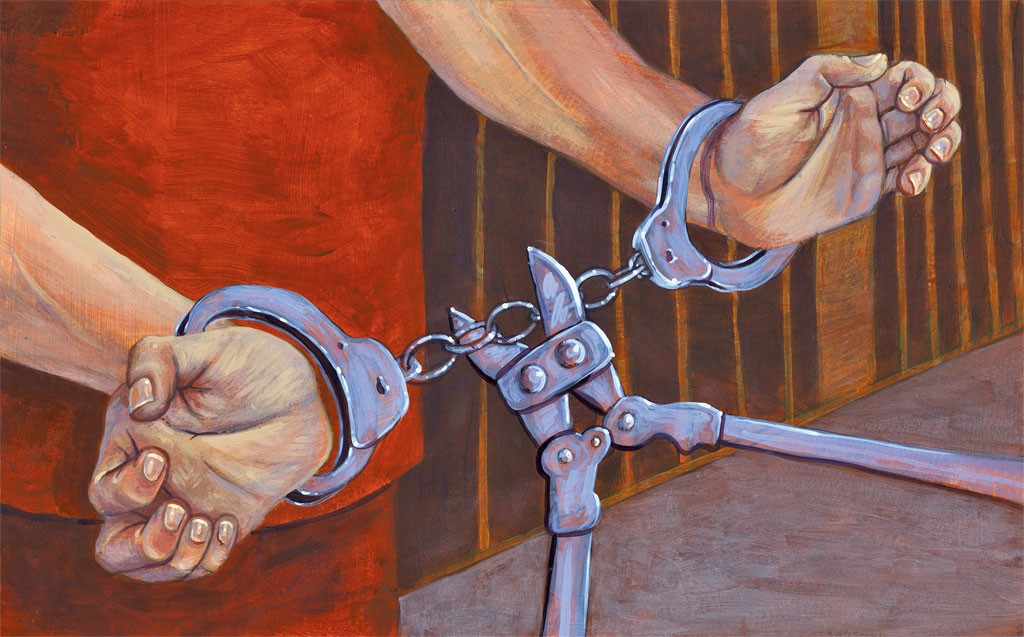 Vermont Department of Corrections Commissioner Andy Pallito recalled spotting a young woman on a prison tour; he knew she was addicted to heroin, but she wasn't getting treated for it. On another occasion, a former inmate who served five years on a marijuana conviction described his crime to Pallito as "possession of a vegetable."

Pallito has struggled over the years to rein in a DOC budget that has exploded along with the inmate population.

All of that has led him to a conclusion shared by few in his field: Pallito believes that possession of all drugs should be decriminalized and that the War on Drugs should be declared a failure, he told Seven Days. The man who supervises Vermont's 1,900 prison inmates believes that many of them shouldn't be behind bars, and that incarceration sets them up for failure.

"Possession of drugs for personal utilization — if somebody is not hurting anyone [else], that should not be a criminal justice matter," Pallito, 49, said in an interview at his Williston office. "I don't think anybody can say that putting somebody with an addiction problem through the corrections system is a good idea."

The DOC commissioner has been following news reports from Portugal, which in 2000 decriminalized all drugs and has since recorded declines in drug abuse and overdose deaths. He's decided it's a brave example that Vermont should emulate.

"We should go to the Portugal model, which is to deal with the addiction and not spend the money on the criminal justice system," Pallito said. "We spend so much money on corrections that could be done differently. The only way to do it is spend less on corrections and more on treatment."

Pallito may be the first head of a state prison system to publicly advocate against the prosecution of users of heroin, cocaine and other street drugs. He knows of no one among his peers who has stepped forward. Organizations that question the War on Drugs, such as Law Enforcement Against Prohibition — a group of former and current police officers — have not claimed any state corrections administrators as supporters.

"When you're a corrections commissioner, most people think you're tough on crime, law and order, and I am — for certain crimes," Pallito said.

He believes that possession of marijuana should be legal, in any quantity. Possession of all other drugs, provided they are in small quantities for personal use, should not result in a criminal charge but rather a small civil fine, along with a mandate to undergo treatment. In essence, he'd treat all drugs in a way that is consistent with Vermont's 2013 marijuana decriminalization law, which stipulates that people found with one ounce or less face a $200 fine but no criminal charge.

Pallito stressed two points: Drug dealers should still face criminal charges. And decriminalization should not happen overnight — there aren't enough drug-treatment providers to handle the effects of such a switch.

He would go even further in decriminalizing drug-related activity. The many people who are charged with drug-addiction-related property crimes, such as theft, would not face prison time.

Currently, more than 500 of Vermont's 1,900 inmates are in custody for either property crimes or drug possession. Two of those are being incarcerated for marijuana possession.

Freeing such inmates would dramatically reduce the prison population, saving the state several million dollars annually and enabling it to end the controversial program that ships 300 overflow inmates to privately run out-of-state prisons.

Further, Pallito said, decriminalization would allow people to take advantage of effective treatment programs and to avoid criminal convictions that prevent them from rebuilding their lives.

"I think you will find a lot of people in the criminal justice system who have been there for a number of years understand its faults most acutely," said Chittenden County State's Attorney T.J. Donovan, who seemed a little taken aback by news of Pallito's stand. "The best policy is front-end work, and Andy sees that, and it's consistent with his progressive ideology."

Pallito is an unlikely resister in the drug war. A New Jersey native, he moved to Vermont after graduating from Saint Peter's College in 1987 with a degree in accounting. He landed a job working for the former commissioner of the Agency of Human Services, the umbrella agency that includes the DOC.

Among his duties was crafting budget presentations for various Vermont governors; it was the 1990s, when the state's prison population was on the rise due to tougher drug laws. To make the case that AHS was being financially responsible, Pallito used spreadsheets to demonstrate that the DOC budget was growing faster than other AHS costs.

When Pallito transferred to the DOC in 2001, several departmental higher-ups ribbed him about the spreadsheets. But that didn't stop him from rising through the ranks. He became deputy commissioner in 2006, and former governor Jim Douglas, a Republican, appointed him commissioner in 2008. He was one of only a few state commissioners who survived the transition to Gov. Peter Shumlin's Democratic administration.

In the seven years he's served in the DOC's top job, Pallito hasn't been able to reverse its budget trends. Vermont's inmate population jumped from 1,000 in 1995 to 1,900 today. In the same time period, the department's budget has grown from $44 million to $159 million. By way of comparison, Vermont spends about $90 million a year on higher education.

Pallito is soft-spoken, to the point of occasionally being difficult to hear. His office is so sparsely decorated that his personal effects there wouldn't fill a cardboard box. A career government employee who lives with his wife in Jericho, he was initially hesitant to share his views with Seven Days. He does not appear to have come forward to enhance his public profile or because he plans to run for office.

The only other public-safety official in Vermont to make a pronouncement similar to Pallito's is former Windsor County state's attorney Robert Sand, who in 2007 declared support for marijuana decriminalization and called for an end to the War on Drugs.

Sand found himself in a political firestorm. Police officials criticized him. In retaliation for Sand's statement, Douglas announced that he would order Vermont State Police to bypass Sand and take large marijuana cases in Windsor County to the Attorney General's Office or to federal prosecutors.

In an interview, Sand recalled that he was taken aback. "It's not particularly fun when other leaders in the state seek to demonize or attack you for comments that were made in good faith," Sand said.

Sand said he believes that politicians and the public are more willing to consider criminal justice reform now than when he made waves. Treating addiction as a public health issue has become a popular notion for officials across the political spectrum in Vermont, and Shumlin has repeatedly spoken of keeping "non-violent" offenders out of prison.

But that's as far as most have been willing to go.

Senate Judiciary Committee chair Dick Sears (D-Bennington), one of the legislature's most powerful members, said that he opposes decriminalization, which he reasons would only increase demand among addicts. "I don't know that we're going to succeed by legalizing or decriminalizing," Sears said.

Sears praised the commissioner, though, for supporting various initiatives to reduce the inmate population —which has fallen from 2,100 to roughly 1,900 in the past year. Pretrial diversion programs and a $1 million federal grant to reduce inmate recidivism have been positive factors.

"It's probably the most difficult job in state government," Sears said of Pallito's post. "It's thankless, but at the same time, it's one of tremendous responsibility. If you release the wrong people, you're where the buck stops. No matter what happens, he gets blamed."

Donovan, the Chittenden County state's attorney who has positioned himself as a leading voice in the criminal justice reform movement, called Pallito a "great partner" with a "very strong understanding on these issues." But Donovan does not support drug decriminalization, either.

He pointed out that a bill to legalize recreational marijuana use in Vermont didn't make it to a vote during the past legislative session. And that would have been a baby step toward the decriminalized world that Pallito envisions.

The stalled effort to legalize marijuana, Pallito said, is only "getting in the way" of a bigger debate that he considers inevitable — a push to get users of heroin and other more serious drugs out of the criminal justice system.

"It's interesting, how long the conversation takes — and this wanton desire to control personal behavior," Pallito said. "The conversation is moving at the speed of a glacier. I find that surprising. While we are having that conversation, people with addictions aren't getting any better. There's been speech after speech. Too many. Well, who are you sending to DOC?"

So many drug addicts are behind bars that the state's only prison for women, Chittenden Regional Correctional Facility, has had to take steps to curb drug use inside the prison. Inmates who test positive for drugs now stay in Foxtrot, a more restrictive unit, leading many inmates to complain.

Pallito acknowledged that publicly voicing his opinion could put his career in jeopardy. But he said that the time had come for him to speak up for what he believes is best for the state and for addicts.

"There's fear of political retribution by political attack," he said. "People can be unforgiving. People get skewered."

Pallito serves at the pleasure of Shumlin, with whom he has shared his views on decriminalization. "While the governor certainly respects Commissioner Pallito's right to express his personal views, it is not the administration's policy to support decriminalizing all drugs," Shumlin spokesman Scott Coriell said. "The governor looks forward to continuing to work with Commissioner Pallito to implement the critical criminal justice and drug policy reforms under way."

Though Shumlin announced he will not seek reelection and will step down in January 2017, Pallito said he hopes to stay in state government and is open to keeping his current job — if the next governor has a progressive attitude about criminal justice.