Vermont’s Old Barns Are Easy to Commemorate, Less So to Save 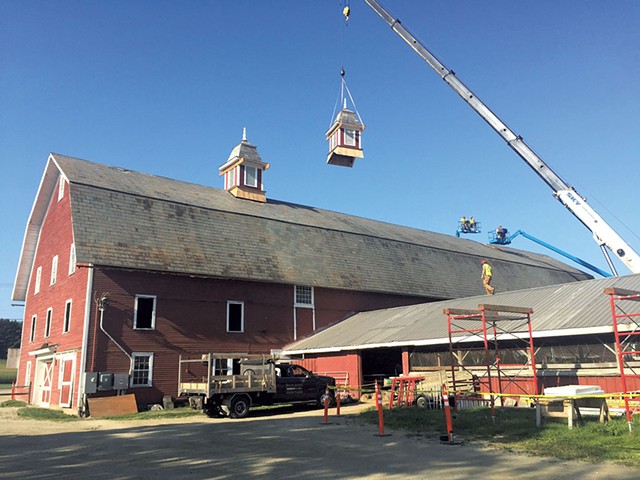 In 2017, the Tipton family — Benjamin, Michelle and two teenage children — returned to Vermont after nearly a decade away to establish a family farm. They found and purchased a 20-acre former farmstead in Burke Hollow whose only remaining structure was a deteriorating barn. It had sunk a foot into the ground in places, many of its timbers had rotted, and the roof was near collapse.

"People in town knew it as the red barn on the hill that the foxes lived in," Benjamin Tipton said during a phone call from his other job as a physician's assistant.

Like many barn owners around the state, the couple wanted to rehabilitate the barn but knew the cost would be high. Barns are one of the most beloved icons of Vermont's history and landscape, but a staggering number go unrestored for lack of funds. Ben Doyle, president of Preservation Trust of Vermont, estimates that among the state's roughly 10,000 historic barns, "easily hundreds" are lost to collapse, fire or teardowns every year.

"People in Vermont love barns... In many respects, they're similar to churches." Ben Doyle tweet this

Tipton went online and discovered that both Preservation Trust and the Vermont Division for Historic Preservation offer financial assistance for barn rehabilitation. (Both define "barn" as any agricultural structure — corncrib, sugarhouse, chicken coop, silo and so on.) Preservation Trust offers matching grants of up to $500 for an expert consultant to assess what needs to be addressed and in what order. Owners can then apply for a 50-50 matching barn grant of up to $15,000 from the state's historic preservation division.

The two organizations helped Tipton determine that his barn dated from between 1820 and 1860, and the state awarded him the maximum amount of aid.

Such help is crucial to preserving Vermont's barns, though it has limitations. The money is available only for historic barns — that is, barns at least 50 years old that have not undergone "many alterations or incorporated new materials that would cause them to lose their historic integrity," according to Caitlin Corkins, who has coordinated the state barn grant program for the past eight years.

If barn owners are interested in rehabilitation, a good first step is to find out whether their barn is historic, state architectural historian Devin Colman said. A call to his office will determine whether the structure has been listed on the Vermont (or National) Register of Historic Places. If not, Colman determines its eligibility for such listing, usually during a site visit. Eligibility for listing is all that's needed to access barn grant funds.

Most barns in Vermont are likely to be historic. The state's building stock is on the older side, Corkins noted, and disused barns tend to remain untouched.

And there are a lot of them. Colman suggested thinking about their numbers in terms of data from the Vermont Agency of Agriculture, Food and Markets: In 1920, Vermont had 20,000 working dairy farms, each with at least one barn. Now there are 700 such farms. That leaves a lot of potentially disused or underused barns.

The number of historic barns among that larger number can only be estimated. A volunteer-driven Vermont Barn Census documented 2,800 historic agricultural buildings before its software became obsolete two years ago. (The historic division hopes to migrate the census into a new database identifying all Vermont historic properties, Colman said.)

Deteriorating barns line almost every rural Vermont road. And anyone who cares about the state's agrarian landscape, or barns in particular, finds such sights heartbreaking.

"There's a collective feeling of sadness a community [has] when a beautiful old barn caves in," Doyle said. "There's a sense of shared identity around a barn. The loss is particularly painful."

The general love of barns was evident in a January 24 webinar on their history, maintenance and rehabilitation, hosted by the New Hampshire Preservation Alliance and held jointly with the preservation trusts of six other northeastern states, including Vermont. Nearly 600 people from around the region attended. The occasion was the U.S. Postal Service's release that same day of a set of four postcard stamps featuring iconic American barns.

One of the three guest speakers at the webinar was University of Vermont professor Thomas D. Visser, director of the graduate historic preservation program and author of the seminal Field Guide to New England Barns and Farm Buildings, published in 1997. Visser was the consultant on the USPS stamps; he worked with the artist and designer to make sure the barns had historically correct features while remaining generic types.

"Tom Visser — he is the barn guy," Doyle remarked.

Friends and coworkers gave Doyle multiple copies of Visser's book when he joined Preservation Trust four months ago, following Liz Gamache, who served as interim director for a year after the death of founding director Paul Bruhn in September 2019. Preservation Trust works on more than 200 preservation projects each year, of which only 20 or so are barn assessments. But the gifts of Visser's book underscored for Doyle the importance of barns to the essential character of the state.

Over his years of fieldwork, Visser took all the black-and-white photographs of farm buildings featured in his book. During a phone call, he said of those barns, "I know a good many of them have been lost." His purpose was to document the oral histories of barn owners and the physical evidence of barns' construction — down to the types of nails used over the centuries. Visser's Field Guide remains a reference for expert builders and preservationists, of which the Division for Historic Preservation maintains a list.

Adaptive reuse of barns was one focus of the webinar. Many barns have been rehabilitated for use as event and wedding spaces, for agricultural tourism, or even, in one case Doyle mentioned, to dry hemp.

Visser pointed out that, when barns are not serving agricultural purposes, "90 percent of the time they are being used for storage, which is perfect." Restoration makes sense, he noted, adding, "Where else are they going to store their snowblower?" 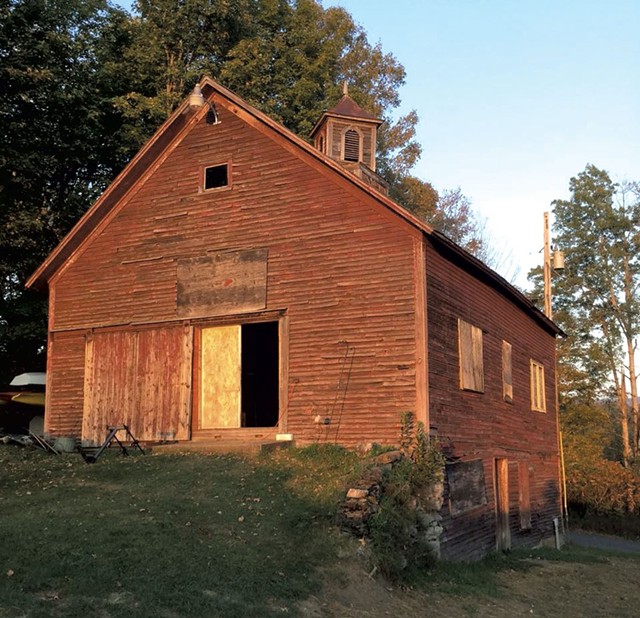 During a phone call, Doyle noted that the Yellow Barn in Hardwick "was built for agriculture, then became the Greensboro Garage for 30 years, and now is a showplace for Vermont's local food economy." (The structure provides production and administrative space to agricultural businesses, including cheesemakers the Cellars at Jasper Hill and Cabot Creamery.) "All these uses are vital," Doyle went on. "They tell the story of what's important to that community at that point in time."

Unfortunately, there is never enough money to address the number of Vermont barns that need salvaging. Since 1991, when the state barn grants first became available, the program has doled out $4 million to fund slightly more than 400 projects, according to Corkins. Currently, the program receives $200,000 annually to fund 15 to 20 projects — yet it receives 40 to 50 applications a year.

On a positive note, Corkins said, Gov. Phil Scott's recent budget proposal calls for an increase in barn grant funding over the next two years.

Barn assessments and grants are the only preservation funds awarded for privately owned structures; the typical recipients are nonprofit and community buildings.

And barn owners must still match those grants with their own money. Some have addressed one problem at a time — roof, beams, foundation — over multiple years and grant applications. Others have been helped by a community effort.

The Lemax Farm in Hartland, a working farm run by Kelly and Ed Meacham, is "a really spectacular farm with an amazing, iconic barn," Corkins said. Knowing that the hardworking Meachams didn't have the means to rehab their failing barn, part of which dates from the 1790s, a group of concerned neighbors launched a Kickstarter campaign in collaboration with the Upper Valley Land Trust.

The crowdfunding effort raised enough money to match three $15,000 state barn grants that the Meachams received over six years. They eventually secured from other sources the entire $200,000 needed for full restoration. Only a paint job on the horse barn remains, according to Matt Dunne, an early member of the Friends of Lemax Farm who is a former state legislator and founder and executive director of the Hartland-based Center on Rural Innovation.

At the Tiptons' Firefly Farm at Burke Hollow, as the family named it, the state barn grant, which they won in 2017, got the barn "out of the intensive care unit," in Benjamin's words.

He noted that, while the money came from Vermonters' taxes, it kept two Vermonters — of Jason Norris Barn Restoration in Glover — employed for a summer and supported a local sawmill, Evergreen Forest Products in Sutton.

The family has subsequently put more of its own money into the project than the original matching $15,000. But the grant was key to stabilizing the barn to "rehab it back to its glory," Tipton said.

"This is a great program to preserve our rural heritage," he declared. "It's going to leave these structures for our kids and grandkids to see — the hand-hewn beams, the little marks on them. Once they're gone, they're gone forever. When you walk in, you feel the history of it. That's different from a modern metal-structure barn."

Doyle, who grew up in Sutton playing in his farming neighbor's barn, also waxed lyrical about the structures. "People in Vermont love barns, and I think there's a reason why," he said. "In many respects, they're similar to churches. They're our portals to the working landscape. Have you been to the Breeding Barn at Shelburne Farms? I mean, that is a cathedral. Talk about a beautiful, sacred space.

"Barns are the doorway between the villages and towns and the working landscape and natural world," Doyle continued, "and to our past."

The original print version of this article was headlined "Barn Again | Vermont's old barns are easy to commemorate, not so easy to save"