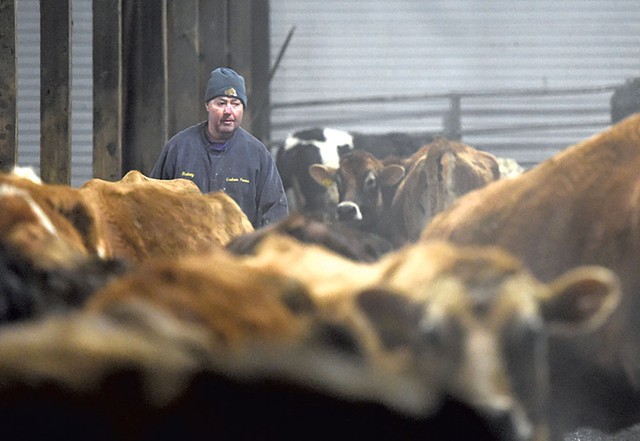 When Rodney Graham sells his small herd of Holsteins and Jerseys in the coming weeks, it will mark more than the end of his family's century of milking cows in Williamstown. For the first time in modern Vermont history, not a single active dairy farmer will be serving in the state legislature.

Unable to absorb the latest cut in what he is paid by his organic cooperative, the fourth-generation dairyman and third-term Republican state representative says he's being forced to find another way to make a living.

"We've barely been surviving, and now this," the 56-year-old farmer said as he did the morning milking last week in the frigid barn on his 200-acre property. "We'd have to borrow money to continue to operate. I just can't do it."

The pending retirement of Vermont's last dairyman-lawmaker underscores the painful consolidation under way in the state's most iconic industry, as well as growing concern about the ability of shrinking rural communities to shape the politics and policies that affect their livelihoods.

"There's a shift in the winds, for sure," said Roger Allbee, former secretary of the Vermont Agency of Agriculture, Food and Markets. "It used to be legislators and even the governor took an active leadership role in agriculture. In this day and age, you don't even see agriculture being mentioned by candidates for office."

Allbee, an expert on the history of the state's dairy industry, said he can't be certain Graham's retirement marks the first time the 180-member legislature will have no working dairy farmers. But the arc of the state's politics and economy since Vermont became a state in 1791 makes him fairly certain that's the case.

"It doesn't surprise me at all," Allbee said. "We have people who are dedicated legislators, but we don't have the inside knowledge there of what's happening on the farm that existed years ago."

Depressed milk prices and increasing competition from industrial-scale dairies mostly in the West have driven the number of Vermont dairy farms to a modern low of 652, a 36 percent culling over the last decade, according to the Agency of Agriculture. Milk production is up slightly over that same period, however, as the consolidation has increased the average dairy herd size by 39 percent.

Vermont dairy remains a formidable economic sector, producing two-thirds of the milk consumed in New England and generating an estimated $2.2 billion in economic activity each year, according to the state.

Those numbers, however, mask a deeply human story of loss and upheaval for families who have helped make the Vermont landscape what it is today, said Alyson Eastman, Vermont's deputy secretary of agriculture and a former state representative.

"It affects me emotionally," Eastman said. "We sold our cows 13 years ago, and it's a day you don't forget."

Dairy farmers were a force in the Statehouse not long ago, said Sen. Bobby Starr (D-Essex/Orleans). He recalls when 15 to 20 lawmakers kept herds. "Years ago, when we had, like, six farmers on the [House agriculture] committee, they would argue between themselves about best practices, and say, 'Aw, you guys are all wet,'" Starr recalled with a chuckle.

Starr has served in the General Assembly for more than 40 years, starting as a state representative and becoming a senator in 2004. He grew up on a dairy farm but made his living in trucking. Having farmers in the building has been vital when crafting legislation for a specialized industry with complex regulations, Starr said.

"If you really wanted to know how it is on the farm, you could just go upstairs and say, 'Hey, Rodney, I got a question for ya,'" Starr said.

Graham, who serves as vice chair of the House Committee on Agriculture and Forestry, said he's always tried to advocate for farmers, working to keep taxes low and regulations to a minimum.

"There's a big lack of understanding about agriculture as a whole in the Statehouse now," Graham said. "If we had a few more hands-on people that are in the business, it would be a help."

When Graham says "hands-on," he means it.

He rose before dawn last Thursday morning in Williamstown, bundled up against the single-digit temperature and drove his pickup down a hill. Passing a "Be Healthy. Drink Milk" sign at the farmyard's entrance, Graham pulled up outside a warren of buildings ranging from recently renovated to ready to collapse.

Wearing a tattered blue sweatshirt, knit cap and pair of Dickies tucked into muck boots, Graham coaxed his herd of 35 milkers from the frigid, manure-filled barn into the warmer and decidedly cleaner milking parlor. There, as he methodically sterilized and wiped teats, attached suction cups, and dodged streams of cow piss and worse, Graham explained why his modest dairy can't survive. 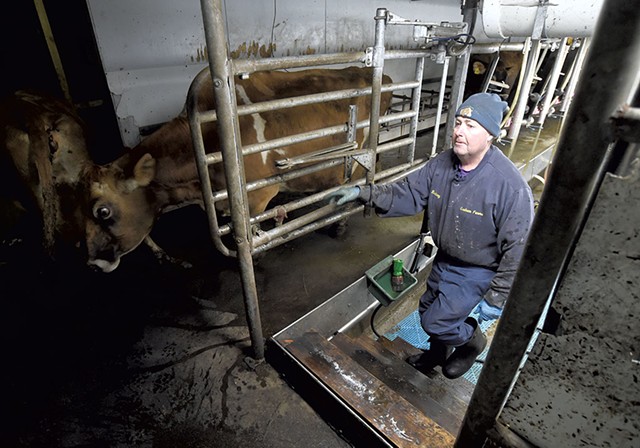 Founded in 1916 by his Scottish immigrant great-grandfather, Norman Graham, the farm transitioned to higher-priced organic milk in 2007, selling to the Wisconsin-based co-op Organic Valley. In 2013, the co-op started a line of milk from grass-fed cows and offered Rodney Graham a price bump — $6 extra per hundredweight. Cows on a grass-only diet produce less milk; the premium prices compensate farmers for the volume drop.

Graham owns plenty of pastureland and was already feeding his cows mostly hay, so he happily agreed to participate in the program. Milk prices held up well enough that, in 2016, he decided to upgrade his modest milking parlor, sinking $250,000 into the building and equipment.

The expansion doubled the number of milking stalls to 16, which reduced milking time by about a third, and reaped energy savings of several hundred dollars per month, he said. But it also saddled him with significant debt just before organic prices took a hit, falling 15 percent over two years. A drought followed in 2018, which reduced the yield and quality of hay. Then, last fall, he lost more than a dozen cows to mastitis infection.

The final blow fell four weeks ago. Organic Valley canceled his grass-fed contract because, the co-op informed him, the milk truck that came every other day was unable to safely navigate the mile-long dirt road to Graham's farm. Truckers who didn't put chains on their tires in winter would sometimes get their rigs stuck on a hill as they left the farm, and Graham would have to pull them out with his tractor.

Organic Valley's trucks "have slid dangerously" on the hill to Graham's farm, and the hauler wasn't willing to accept that continued risk, John Cleary, the co-op's New England regional manager, said in an email.

"Safety is our priority," Cleary wrote.

Organic Valley continues to buy Graham's milk, picking it up in a smaller truck more suited for the route. But the co-op no longer pays him those top-tier grass-fed prices, he said. The loss of the premium penciled out to about a $25,000 drop in annual revenue, he said.

Fuel, insurance and energy costs are all on the rise. Just last year, Graham had to install a device that records the temperature of the bulk tank. It's basically a $1,500 thermometer. On top of that, a new co-op production cap makes it impossible for him to offset those higher costs by expanding his herd, he said. He can't save much money on labor, either. It's just him and his nephew, Matt, running the place most days.

"I don't see a light at the end of the tunnel that's going to get dairy out of this crisis," Graham said.

Farms such as Graham's shaped the identity and landscape of Vermont for so long that there's a "certain wistfulness" to losing the last dairy farmer-legislator, retired state archivist Greg Sanford said.

The citizen legislature was set up to convene from January to May to accommodate farmers' planting schedules. Still, it hasn't exactly been easy for them to serve under the golden dome that has been graced since 1858 by a statue of Ceres, the Roman goddess of agriculture and fertility.

"There's a lot of barriers to dairy farmers being there," said Michael Sherman, coauthor of a seminal history of Vermont, Freedom and Unity. "They can't really afford to be away from their farms because they've got to milk their cows twice a day."

Sanford stressed, however, that many legislators have, and will likely continue to have, strong ties to the state's increasingly diverse agriculture landscape.

Sanford also noted that voters go to the polls every two years, and although there won't be a working dairy farmer in the legislature this year, that could change after future elections.

But Allbee noted that it's troubling that a dairy farmer like Graham, who made many of the changes he was told he should, can't make a living anymore.

"Here is a farmer who switched to organic for a higher price and small scale, which is a model that many said is more sustainable — even that model is having economic problems," Allbee said.

He's been preaching for years for farmers to embrace valued-added products, like the cheese and meats produced by farms such as Jasper Hill in the Northeast Kingdom. "I tell people that commodity agriculture has never been something that Vermont farmers have been able to survive on," Allbee said.

Graham is still trying to figure out what to do but says he doesn't have any interest in making cheese or milking goats. After selling his herd and the milking equipment, he said, he may expand his maple sugaring operation, cut and sell hay, and maybe even branch out into minor car repair.

"It might be a tough couple of years, but we'll work it out," Graham said.

As for being the last dairyman-lawmaker, he recognizes that Vermont is changing.