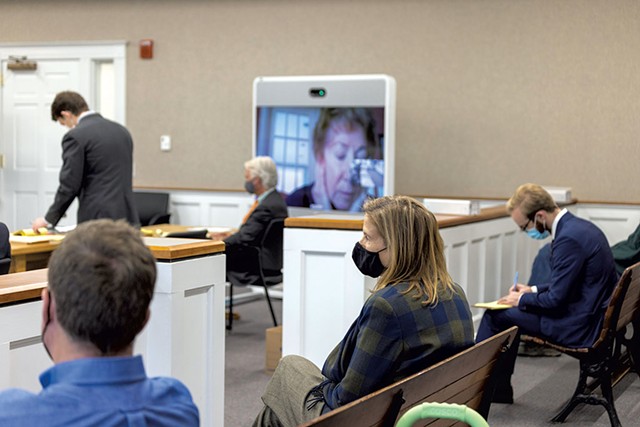 Even before the pandemic, the backlog of criminal cases in Orleans County was getting out of control. Each year from 2016 through 2019, the state's attorney's office filed many more cases than the court could resolve. The number of pending felonies and misdemeanors shot up from 362 to more than 600.

Since the virus arrived, the situation has only worsened. For more than 20 months, the jury box in the old, cramped court in Newport has remained empty as the state judiciary has puzzled over how to safely resume trials there. Every case has been affected, from those involving minor hunting violations to allegations of sexual abuse of minors. Defendants seeking to assert their right to a trial by a jury of their peers have been left waiting for their day in court, some in COVID-19-prone jails, while victims await justice.

"While there are things that we would do differently in hindsight, I can assure you that we have not, for one second, lost sight of our responsibility." Supreme Court Associate Justice Harold Eaton tweet this

The court in Orleans County is among very few nationwide still unable to hold trials, according to the Washington Post, which spotlighted the Newport courthouse last month as an "extreme" example of how the pandemic has clogged the country's judicial system.

While the problem in Orleans is perhaps the most severe, it is not an isolated one in Vermont. Nearly two years into the pandemic, COVID-19 continues to wreak havoc on a clunky state judiciary that has failed to fully adapt to the initial strain of the virus, let alone the Omicron variant, which has brought fresh uncertainty. The courts typically hold 100 or more criminal jury trials each year. Since March 2020, the judiciary has recorded fewer than 40.

The sluggish restart is the result of a disjointed and overloaded system that has been hampered by obsolete facilities, bureaucracy and, some attorneys argue, mismanagement.

Many defendants have tried to assert their due process rights, arguing that the delays have impinged upon their constitutional right to a speedy trial. For more than 18 months, such arguments were futile. But recently, an Orleans County judge tossed nearly two dozen cases — mostly low-level — for precisely that reason.

Sen. Dick McCormack (D-Windsor) summarized the bind last week during a legislative hearing. "What we have are two alternatives, neither one of which is acceptable," he said. "One is that we simply ignore the United States Constitution. And the other one is that we let multiple child molesters go free."

Unlike the rest of Vermont, the state's independent judiciary, helmed collectively by Vermont Supreme Court justices, remains under its own emergency declaration. Progress toward full operations has been slow and uneven, and at least half a dozen courthouses still "aren't quite where we'd like them to be," Associate Justice Harold Eaton told lawmakers. Meanwhile, the two officials who oversaw day-to-day operations during the pandemic — court administrator Patricia Gabel and chief superior judge Brian Grearson — both retired in the last few months.

Vermont's judicial system is rarely nimble. It's adversarial by design, which is challenging when public health demands a cooperative response. Add in historic, outdated courthouses that are rented from a different branch of government, and the challenge of adapting to an airborne pathogen becomes even harder.

But prosecutors and defense attorneys alike say the judiciary hasn't acted with enough urgency or transparency, and they point out that neighboring states were able to resume trials last year more quickly and uniformly. The lawyers vented their frustrations at a hearing last week before the Senate Committee on Institutions, which is chaired by Sen. Joe Benning (R-Caledonia), himself an exasperated defense attorney.

John Campbell, executive director of the Department of State's Attorneys and Sheriffs, told lawmakers bluntly that the court administrator's office had poorly managed the courts during the pandemic and failed to communicate with clerks and attorneys about the specific problems with each building.

"They don't understand that we should all be partners in this," he said.

After listening to two hours of testimony critical of judicial leaders, Eaton largely defended the judiciary's efforts to balance access and COVID-19 safety. "While there are things that we would do differently in hindsight, I can assure you that we have not, for one second, lost sight of our responsibility, nor have we ever thought we should do nothing to address cases getting heard," he said.

Retrofitting old, cramped courthouses to accommodate social distancing and ensure adequate air circulation, which trials do require, isn't always simple. In Orleans County, attorneys began pushing last year for the judiciary to open an alternative site for jury trials if the courthouse couldn't be upgraded. The judiciary declined after state Buildings and General Services staff estimated that it would cost $1.4 million and take at least six months to set one up.

"We did not feel, under the circumstances, that that was prudent, having in mind that there are plans for a new facility there that we hope will reach fruition," Eaton said. 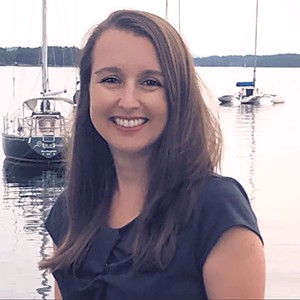 Orleans County State's Attorney Jennifer Barrett told lawmakers that the delay has been "unacceptable" for victims and defendants. Barrett said she had even joined with defense attorneys to beg the judiciary to resume criminal trials in her county.

"The whole process has just been so incredibly frustrating," she said.

In recent months, defense attorney David Sleigh filed dozens of motions to dismiss charges that had been pending against his clients in Orleans County before COVID-19 hit. At a combined court hearing in November, many of those defendants testified that the pending charges had affected their ability to pursue new careers or restore their reputations.

One of them, John Larose, faced multiple counts of violating an abuse prevention order for allegedly contacting a former spouse by text in 2019. The middle-aged man had been living at his elderly father's house on a 24-hour court-imposed curfew for the duration of the pandemic.

"Even something like a soda, or anything like that, I can't go get it myself," he said during the November hearing, according to a transcript reviewed by Seven Days. "And I can't have no social life."

To the surprise of most everyone in Vermont's judicial system, Judge Robert Mello granted 22 of Sleigh's motions, the attorney said, including in Larose's case. They appear to be some of the first charges dismissed because the state could not provide a trial in a reasonable amount of time.

As the rulings rolled in, the judiciary announced that it had identified a fix to the Orleans criminal courthouse that would enable trials to start safely as soon as this month.

"They suddenly found this miracle cure," Sleigh said. "Now it's all hunky-dory."

The "cure" was the installation of a heating coil that allows the HVAC system to operate during the winter months, said interim court administrator Scott Griffith, who assumed the role this month. The judiciary landed on the fix following an engineer's report that was completed in August 2021; the first jury draw is scheduled for January 24.

Sleigh's speedy trial argument has yet to catch on elsewhere, including in cases with more serious pending charges. "There's a whole lot of clients of mine that are very angry that I can't accomplish what you did," Benning told Sleigh at the hearing last week.

The gravity of an alleged offense does not explicitly factor into speedy trial analyses, but some attorneys believe that judges consider it. Cabot Teachout has filed numerous motions for a client who has been locked up on pending sexual assault charges for more than two years, seeking to have the charges dismissed because the man has not been granted a timely trial.

Federal and state judges and the Vermont Supreme Court have all ruled against the speedy trial motions by Draxxion Talandar, who was charged in December 2019 with numerous counts of sexual assault and domestic assault. The Windsor County case still has no trial date.

In places such as Windsor County, where criminal jury trials are still not being held, judges have opted to schedule them in neighboring courthouses with jurors from the neighboring county. But Teachout, Sleigh and other defense attorneys filed a petition in Washington County last month to have these change-of-venue orders stricken as administrative overreach. Teachout said the orders disadvantage some criminal defendants, who may believe that a local jury is more likely to be sympathetic to their case.

"It really comes down to the unfairness of the process for the people who are sitting in the defendants' chairs," he said. The petition is still pending.

There's at least one instance in which all parties have worked together to address the case backlog. In Franklin County, Superior Judge Martin Maley, State's Attorney Jim Hughes and the local public defender's office met last fall and agreed to the mass dismissal of more than 350 pending low-level cases. Hughes told Seven Days that winning such cases would have little value: Offenders could soon have such convictions sealed or expunged.

The dismissals scarcely made a dent in the problem. And such a solution isn't possible in other arms of the court, such as the similarly overburdened family divisions.

Upgrading or installing HVAC systems in all of the state's courthouses would cost $5.7 million and take at least two years to complete, Eaton told lawmakers last week. But it won't solve all of the judiciary's woes. Eaton said five courthouses don't have enough security personnel, because the local sheriff's office is either short-staffed or redeploying its deputies to more lucrative assignments.

Regardless, Eaton and others in the judiciary were quick to point out that lawmakers were scrutinizing them at a time when some other states had again halted jury trials due to the rapid spread of the Omicron variant. So far, the Vermont Judiciary has encouraged courthouse visitors to wear better masks but is leaving any decision to postpone trials to individual judges.

As of press time, Seven Days had not identified a Vermont trial that was canceled due to Omicron. Some changes were taking place, however.

One juryless civil trial in Addison County began in December with paralegals and a Seven Days reporter joining the judge and attorneys in the courtroom. When the trial resumed last week, as Omicron cases surged, access to the courtroom was further restricted, and Judge Mary Miles Teachout was on high alert. At one point during last Friday's proceedings, she chided an attorney for leaning in too closely to confer with his associate.