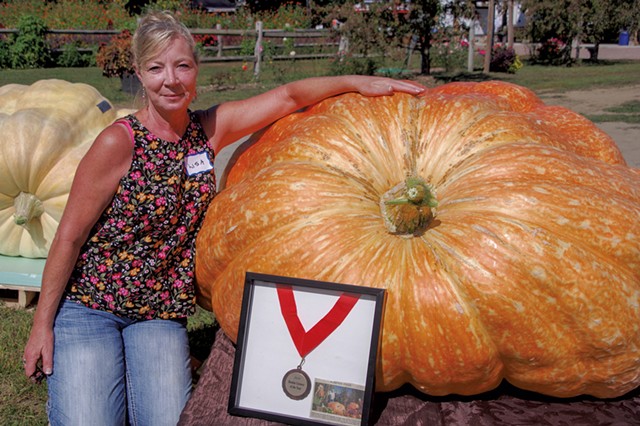 It was 78 degrees as the sun sank over Sam Mazza's Farm Market in Colchester, yet Lisa Gates was rubbing her forearms. "I have goosebumps," she said. The pumpkin Gates had nurtured for months was being lifted with a skid-steer loader to be weighed at the Vermont Giant Pumpkin Weigh-In, and Gates was waiting to see if it would be her first to break 1,000 pounds.

The weight of a giant pumpkin can be predicted by measuring its circumference and height, but the moment of truth comes when the Cucurbita maxima is strapped in and lowered by tractor onto a large industrial scale.

"The suspense is killing me," Gates said earlier in the day as she waited for her turn at the scale. "I walked away when they measured it, because I didn't want to know. I want to be surprised."

"Betty" is Gates' only giant pumpkin. She named it after her late mother, who introduced her to gardening. Betty represents an entire summer of coddling, covering, feeding and grooming — all of which came down to a single moment on the scale.

Gates, who is 55 and lives in Benson, conceded that it's a lot of pressure. Every grower wants to beat his or her own personal best record. But certain milestones — like 1,000 pounds — are especially significant.

Last year, Gates won the Rookie of the Year prize at the Vermont weigh-in with an 821-pound pumpkin — the first giant pumpkin she ever grew.

"It's been so fun learning, and, I'm not going to lie, it's been so nerve-racking," Gates said a few days before the weigh-in, which is organized by the Vermont Giant Pumpkin Growers Association. If a giant pumpkin gets even the smallest crack in its skin, it's disqualified.

The giant pumpkin variety, officially known as Dill's Atlantic Giant Pumpkin, is a far cry from the typical jack-o'-lantern or pie pumpkin you can buy at the grocery store. It is, frankly, not nearly as pretty. The giant version looks like a pumpkin someone carved out of clay and then accidentally dropped on the floor. It can vary in color from bright orange to pale yellow.

Luckily, looks are not the first priority here. Members of the VGPGA brought 33 pumpkins to the 12th annual weigh-in on Saturday, September 21, ranging in size from a large beach ball to a boulder. The winner was longtime grower Kevin Companion, who grew a 1,727-pound pumpkin, his personal best. But each grower received cheers, especially those who grew their own personal biggest pumpkins.

Gates learned to grow pumpkins under the tutelage of her neighbors, Dan and Holly Boyce. Sixteen years ago, Dan Boyce impulsively bought a giant pumpkin seed for $12.95 and grew it to 456 pounds. Today, he and Holly are a Vermont pumpkin-growing institution. They hold the state record and grew Vermont's first and only one-ton pumpkin last summer. To be exact, it weighed 2,017.5 pounds.

Growing a pumpkin that large requires an incredible amount of calculation. It starts with picking the seed. Serious pumpkin growers keep detailed family trees of all their pumpkins, and growers trade or sell seeds. Boyce said he's seen seeds go at auction for up to $500. In 2016, a British horticulture company paid £1,250 (then nearly $2,000) for a single seed. News organizations touted it as the most expensive pumpkin seed ever sold.

Once the seed is started, growers pollinate the pumpkins by hand, delicately transferring pollen from a male flower to a female flower. The Boyces pollinate three pumpkins on each plant, but once the fruits are about soccer-ball size, all but the most promising one are cut.

That single pumpkin grows on the plant's main vine, and side vines are trimmed and buried in the dirt. It's recommended that a single giant pumpkin have 1,000 square feet in which to grow.

Many growers cover their pumpkins with sheds to protect them from the sun, feeding the soil with the required nutrients. The Boyces send soil and leaf samples from the plant to a lab in Idaho for a detailed report on their nutritional content.

At the peak of its growth around midsummer, a giant pumpkin might gain between 40 and 50 pounds per day and drink up to 100 gallons of water. Growers say it's incredible to watch.

"I get my coffee, and I walk down there every morning, and I'm like, 'Whoa,'" Gates said.

Pumpkins around the world are getting bigger, and fast. The last time Seven Days wrote about giant pumpkins, in 2002, growers were still striving for the 1,500-pound mark. Ron Wallace of Rhode Island bested that goal in 2006; just six years later, he was the first grower in the world to achieve a 2,000-pound pumpkin. A Belgian gardener holds the current global record: 2,624 pounds.

"It's because of the internet," Boyce said of the giant pumpkin's growth acceleration. "We know growers from all over the world, and they know us ... Facebook is crazy with it."

While growers may have, and share, the techniques they need to push pumpkins further, growing them still involves a fair amount of risk. If a pumpkin grows too fast, it might burst its skin. Boyce said other growers told him he could push his 2,017-pound pumpkin to 2,500, but he was cautious.

Though spread across the world, the giant pumpkin community is tight-knit. It was a seed from one of Wallace's pumpkins that the Boyces grew into Vermont's first one-tonner last summer. Canadians are particularly interested in the couple's pumpkins, Boyce said, because no one in that country has yet produced a one-ton pumpkin. But if it's possible in Vermont, why not a little farther north?

How big can pumpkins get? When first interviewed in late July, Boyce was optimistic. "We don't know yet," he said. "We may see a 3,000-pound pumpkin this year." He also noted a grower in New Hampshire who may beat the world record in 2019.

The Boyces didn't end up bringing a pumpkin to the Vermont weigh-in this year, because the one they'd planned to enter had a soft spot that rotted through a few weeks ago. They have two others still on the vine on their farm, which they've decided to let grow a few more weeks and take to later weigh-ins around New England.

But the Boyces did have two "granddaughters" present at the weigh-in, meaning pumpkins that someone else grew from the seeds of previous Boyce pumpkins. Those pumpkins placed fourth and ninth this year.

The weigh-in on Saturday began with the smaller pumpkins. It takes a while to load 33 ginormous pumpkins, one at a time, onto a scale, but the crowd of growers remained jolly, cheering for and occasionally heckling one another. Most growers got a chance to sit in the "leader chair," a folding chair of honor, until another pumpkin bested theirs and its grower took their place.

Some growers start very young, such as Ben Messier of Randolph, who said he's "basically 11" and whose pumpkin weighed in at 953 pounds. The weigh-in attracted spectators from around New England and Québec. Norm Gansert has driven up from Rhode Island for the past four or five years and said he wouldn't miss it.

"These people are probably the nicest people you could meet anywhere," he said.

Everybody knows everybody in the pumpkin-growing community. When a Canadian grower named Mike Strange died last year, Vermonters traveled north to attend his funeral. On Saturday, Strange's wife, Gail, was one of the weigh-in announcers, cracking jokes in an orange knit cap.

The VGPGA has traditionally offered prizes for the top 20 pumpkins, but now a $50 Mike Strange award is given to the person who grew the 21st-largest. The organization also confers the Howard Dill award, named for the man who developed the Atlantic Giant variety, to the pumpkin that best combines size, symmetry and bright-orange color.

When Gates' pumpkin was lowered onto the scale, no fewer than three other growers made sure this reporter knew it was named after Gates' mother. Boyce predicted the pumpkin would be a heavy one, because Gates' brother's tractor couldn't lift it.

"I'm just grateful I got it here in one piece," the grower said. "I'm grateful, no matter what."

When the number was read, a cheer went up. Gates' pumpkin weighed 1,087 pounds.

"I told you I was going to cry," she said, posing for a picture and wiping tears from her face. She patted the side of the pumpkin, saying, "Good job, Betty!"

Watching her, grower Aaron Messier observed, "A lot of work and a lot of emotions go into these things." Messier (Ben's father) also weighed in his first 1,000-pound pumpkin this year.

Gates, who works nights at General Electric, described herself as "not much of a conversationalist." She has focused primarily on her job for most of her life, but growing pumpkins has given her a community.

"It's the first time in my life that I've had a hobby," Gates said. "I'm honored to be a part of this ... When it comes to pumpkins, all of the sudden I have something to talk about."