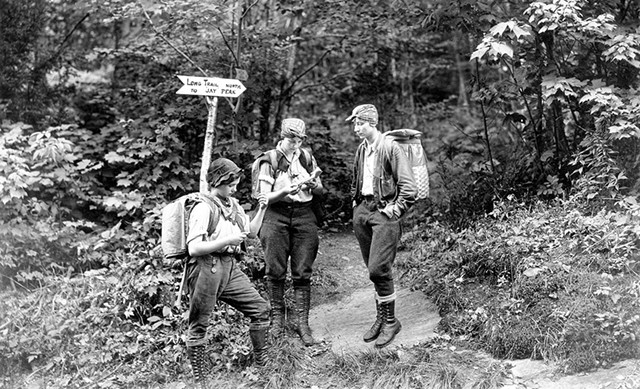 You're a woman in 1927, just seven years after the 19th Amendment has given you the right to vote. You live in the age of short flapper skirts, bathtub gin and silent movies.

Why would you gather two of your female friends, lace up your 14-inch-high boots with moccasin toes, button up your flannel shirt and hike the Long Trail from end to end?

"If you're young and fit and want some adventure, why not?" says Vermont historian Reidun Nuquist of the women known as the Three Musketeers. The trio earned national attention in the summer of 1927 for hiking all the way from Massachusetts to Canada. In doing so, Hilda M. Kurth and Kathleen M. Norris of Schenectady, N.Y., and Catherine E. Robbins of Cornwall, Vt., became the first female "end-to-enders."

Those are just a few of the many women who have been trailblazers in Vermont's hiking history, Nuquist points out. The Three Musketeers will be among "dozens of women" she'll discuss in "Green Mountain Girls: Women of the Long Trail," a presentation on Thursday, March 24, at the Green Mountain Club's headquarters in Waterbury Center.

Nuquist promises stories not only about early female hikers but about trail workers — women whose names are remembered in trail names and on shelters — and about Long Trail romance. "Come to the talk if you want to know what connects a famous flapper and the first women to climb Mount Rainier in 1890," says Nuquist of one mystery she plans to unravel.

"Women's achievements have gone unnoticed or unrecorded for much of our history, which leaves us missing a great deal of inspiration, wisdom and knowledge," adds Brown. "Young girls who open history books and see story after story of men's accomplishments need also to see the courageous and brilliant women who've contributed to our culture."

Nuquist, a retired librarian and end-to-ender herself, became enchanted by the Three Musketeers, and the generations of Vermont outdoorswomen who followed in their footsteps, while she was working for the Vermont Historical Society and at the University of Vermont's Bailey/Howe Library. 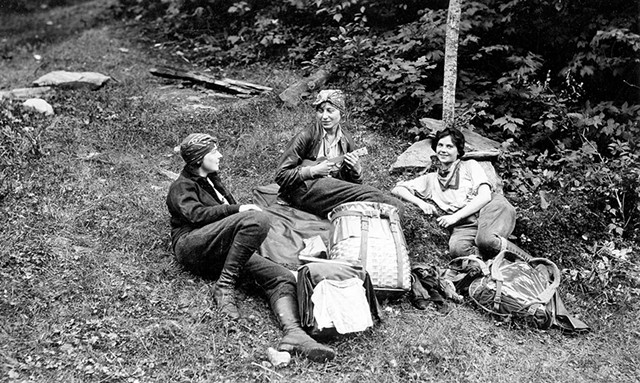 As Nuquist writes in a Long Trail News piece, the Three Musketeers left Williamstown, Mass., on July 25, 1927, each carrying between 20 and 25 pounds on their back. Their foodstuffs? Think bacon, cheese, chocolate, powdered milk and dehydrated vegetables. Instead of Gore-Tex and polypro, they stuffed sacks with blankets and ponchos. Instead of snapping Instagrams with an iPhone, they carried Kodak cameras, along with two axes and three compasses apiece.

The women experienced twists and turns and adventures galore on the Long Trail, which would soon be ravaged by the famous 1927 flood. "It was the worst natural disaster in the history of Vermont," says Amanda Gustin, public program coordinator at the historical society. "So the landscape in some of these places was very different."

Despite the multiple compasses, the women lost their way on the first day and encountered rain, hail and hedgehogs. No matter: They played "the peppiest songs they could think of" on a ukulele, writes Nuquist, when they needed to raise their spirits.

By the time the Three Musketeers were within sight of Canada's finish line, they were already well-known, owing to publicity efforts that the GMC's Jim Taylor used to draw more hikers to the Long Trail. The Rutland Herald wrote of the women: "They have had no scares and have carried no firearms and have scorned male escorts."

(The Three Musketeers did not scorn, however, the offer of a gallon of ice cream from a man near Montgomery, who brought the sweet treat upon hearing of the women's feat.)

On September 4, the journey came to an end: 27 days of hiking, five days of rest and a legacy for countless girls.

"When you ask someone to think about the long-distance hikers who push themselves to their physical limits, hiking hundreds of miles, days and days on end, carrying all their belongings on their backs, braving snow and rain and heat, chances are, the image they'll have in their minds is of men," says Brown. "The Three Musketeers, and all women who've endured the grueling challenge of hiking the entire Long Trail, remind us that all women have the capacity to scale literal and figurative heights."

"They set a good example for us," says Nuquist. "They were there alongside the men from the very beginning, enjoying Vermont for the very same reasons we do today — the scenery, the wildlife, the adventure. What's not to like?"