Vermont, the most vaccinated state in the country — the poster child for America's pandemic response — is in the midst of its worst surge of COVID-19 infections to date.

State officials wish they knew. They have been puzzling over this question for weeks and say the answer likely involves factors common to surges elsewhere in the country: a highly transmissible strain, unvaccinated people, waning effectiveness of vaccines over time and relaxed pandemic rules.

Vermont may be falling victim to its own success. tweet this

But one of Vermont's leading infectious disease specialists believes that an additional factor may be at play, one that speaks more specifically to the state: Vermont may be falling victim to its own success.

Vermont's decisive measures early in the pandemic to shut down businesses and reduce personal interactions, coupled with residents' enthusiastic and early pursuit of vaccinations, kept the worst of the pandemic away — for a time. Consequently, as the Delta variant rages, plenty of unvaccinated Vermonters have never had COVID-19 and therefore have neither vaccine-induced nor natural immunity.

"The thing that really determines how much immune protection the population in an area has from COVID-19 is both vaccination and prior history of infection," said Dr. Tim Lahey, an infectious disease specialist at the University of Vermont Medical Center.

"If you do a great job of protecting people from infection, that means the vaccines are doing all of the immunity lifting," Lahey said. "That's good, because it's safer, but that means you're going to have a susceptible population out there for longer than if more had been infected."

While state officials have struggled to pinpoint exactly what's driving the current wave of infections, they have a better idea of who's getting swept up in it. The short answer: the unvaccinated, who officials estimate make up roughly two-thirds of the 14,000 cases Vermont has reported since mid-July, according to state data. That's despite the fact that unvaccinated Vermonters now represent only about 30 percent of the population.

Children age 9 and younger, who are too young to be vaccinated, have experienced the highest rates of infection during this time, followed by people between the ages of 10 and 39. Those 40 and older, who are statistically more likely to be vaccinated, make up a smaller share of the overall cases.

The same trend holds across geographic lines. Between mid-September and mid-October, Vermont's seven most vaccinated counties — Chittenden, Grand Isle, Lamoille, Washington, Addison, Rutland and Bennington — reported 33 percent fewer infections per capita than the seven least vaccinated counties, despite representing a much higher portion of the population. Similar disparities appear in the rates of hospitalizations and deaths.

"At this point, there's no doubt that if you're unvaccinated, the virus will find you," Gov. Phil Scott said last week. 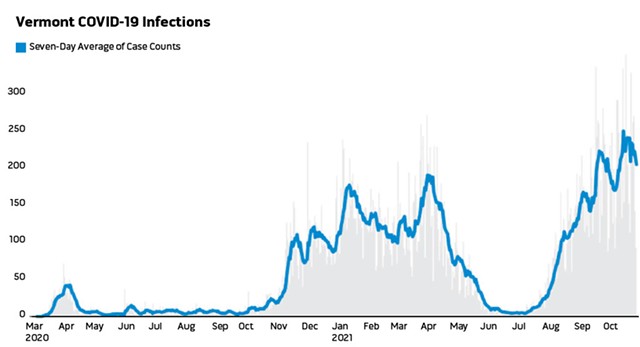 State officials seem far less interested in discussing another theory for why Vermont's latest surge has lasted so long: whether the lack of COVID-19 mask and social-distancing requirements has played a role. Scott has come under intense scrutiny in recent weeks for his refusal to reinstate any restrictions despite the prolonged surge.

At a press conference on Monday, a group of state lawmakers, school professionals and concerned citizens called on Scott to reimpose his state of emergency order and do more to respond. Speakers argued that Scott's vaccination-only approach has allowed the Delta variant to run rampant across the state, disrupting schools and infecting thousands. They demanded that Scott issue another mask mandate for schools and indoor public settings, hire more contact tracers, and increase the number of health care and social work staff in schools.

"It's completely inexplicable to see the lack of action from the administration at this point," said Rep. George Till (D-Jericho), a practicing physician. "It's as if they've fallen asleep at the wheel."

Scott has argued that mask mandates would only stir up controversy without making a big difference in public health, noting that only one school in Vermont has resisted the state's masking recommendations and that many people are still choosing to wear masks in public.

"I don't think my saying it or us mandating that is going to get one single person to wear a mask that doesn't want to wear a mask," Scott said earlier this month. He has instead implored Vermonters to consider their own "personal responsibility," calling that the key to slowing the surge.

Scott reiterated his stance at his weekly press conference on Tuesday, saying that he did not believe a majority of Vermonters want new restrictions or another state of emergency.

"Am I going to declare a state of emergency when we have a housing shortage, labor shortage, climate change mitigation?" he asked. "I mean, is that what we want to do — be in a constant state of emergency? We have to deal with these issues on a day-to-day basis."

He added: "There's a time and a place for a state of emergency, and I can assure you, this isn't it."

But critics remain unpersuaded, and perhaps none so much as Anne Sosin, a public health researcher and policy fellow at the Nelson A. Rockefeller Center at Dartmouth College, who took the Scott administration to task at Monday's press conference.

"This fall, COVID is managing our schools, our health systems and our economy," she said. "Absent policies and guidance reflecting the most recent evidence and recommendations of the [Centers for Disease Control and Prevention], COVID is having dramatic effects across our community."

"Our policy choices, Gov. Scott — not the personal responsibility of our unvaccinated children — will determine both the immediate and enduring impacts of the Delta surge," she added.

To be sure, transmissions among unvaccinated people aren't the sole cause of Vermont's surge. State data show that roughly 4,880 infections have been reported of fully vaccinated people this year and that these "breakthrough" cases have gradually increased during the Delta surge.

A potential theory for this trend involves the ebbing efficacy of vaccines.

Studies on the topic are still emerging, but recent ones suggest that while the vaccines have been successful in preventing hospitalizations over time, their effectiveness at staving off infections has waned. One study released earlier this month found that the Pfizer vaccine's effectiveness against infection fell from 88 percent during the first month after vaccination to 47 percent after five months.

The federal government has authorized booster shots for all three major vaccines, and Vermont is encouraging anyone who received the Johnson & Johnson vaccine more than two months ago, or the Pfizer or Moderna vaccines more than six months ago, to get the additional jabs.

None of this means that Vermonters should regret the state's relatively high vaccination rate. On the contrary, health experts agree that the quick uptake likely helped Vermont initially fend off Delta this summer and weather the surge better than states with lower vaccination rates, by turning what could have been an astronomical spike — one that overwhelms hospitals — into a more moderate but prolonged wave.

"Our Delta surge was more of a blunted surge," said Vermont Health Commissioner Mark Levine. "It wasn't this steep climb up like we see in many of the Southern states and then a [quick drop] downward. We see us going up on a more gradual basis, then hanging out at plateau levels for a longer period of time."

Vermont's Delta surge has nevertheless proven quite disruptive. The state reported record-breaking numbers for both daily case counts and weekly averages this month, while hospitalizations and deaths crept up to levels not seen since last winter.

It's hard to know how big a role the waning efficacy of vaccines is playing in all this, Dr. Lahey, the infectious disease specialist, said, in part because a number of breakthrough cases were always expected. "It's possible that it's a contributing factor," he said, "but the math suggests that it's small" compared to unvaccinated transmissions.

His bigger takeaway was that more vaccinations are needed across the board. Public health officials have long been unsure what percentage of the population needs to be vaccinated to have broad protection from COVID-19 surges.

The hope early on was that, "if you do a great job of vaccinating adults only, that'll be enough," Lahey said. The fact that Vermont is still experiencing such high transmission rates despite vaccinating roughly 80 percent of people age 12 and older confirms that more people must be vaccinated — including children, he said.

"If we could vaccinate the majority of our kids, then our percentages start to drop really low in terms of vulnerable people," Lahey said.

Last week, Pfizer reported that its coronavirus vaccine for children had a 90 percent efficacy rate in preventing symptomatic COVID-19 in a clinical trial of kids ages 5 to 11. The federal government is now considering whether to authorize the vaccine for children.

If and when that happens, Vermont officials say, the state is ready to start vaccinating them.

The original print version of this article was headlined "Preexisting Conditions"