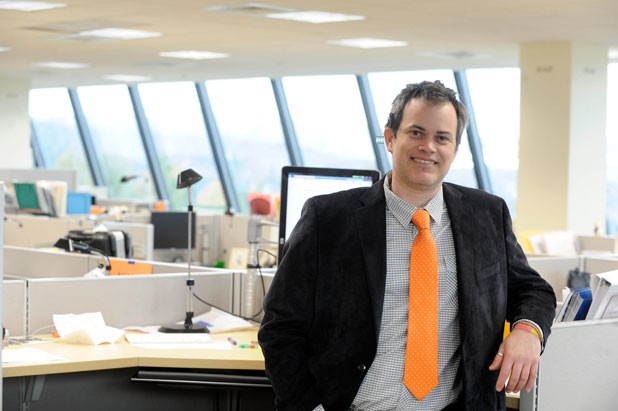 Vermont is synonymous with snowboarding, sugaring and farming. But those activities account for a fraction of the state’s economy. Traditional sectors such as manufacturing and health care play a big role, but the Green Mountain State is also home to a large and growing creative economy made up of "knowledge workers" who produce everything from software to film scores.

The Vermont Technology Alliance, a trade group representing the state’s software and technical companies, estimates that its members alone brought in $150 million in 2009; their revenue jumped to $280 million in 2011.

That year, the state created the Office of the Creative Economy, under the auspices of the Department of Economic, Housing & Community Development, to help support and expand these industries. The OCE absorbed the Vermont Film Commission, which had focused on luring film producers to Vermont. The OCE’s first director, Joe Bookchin, was the former head of the film commission; he resigned in late February.

Lars Hasselblad Torres, creator of Montpelier’s coworking and community-event space, Local 64, has stepped in to take Bookchin’s place. The energetic 42-year-old entrepreneur has a worldly background — he spent his childhood in Seattle and Malaysia, and went to high school in Senegal, earning his bachelor’s degree at Vermont’s School for International Training in 1995. He started a public-policy institute and helped craft prizes to promote innovation and entrepreneurship for the Massachusetts Institute of Technology and USAID before founding Local 64 in 2012.

Over the past year, Torres has been a vocal proponent of the state’s creative economy, emceeing a “Tech State of the Union” event put on by partners including Google, Engine Advocacy and Seven Days in February, and organizing a video-game showcase in January at the Statehouse in Montpelier, where lawmakers heard from local developers hoping to grow their industry in Vermont. Last month, Torres wrote a white paper on creating coworking spaces that was published by the Vermont Center for Emerging Technologies.

Torres, who lives in Cabot with his wife and daughter, came to Winooski recently for a Vermont Technology Alliance lunch and learn on “Marketing Vermont as a Technology State.” We discussed his new job afterward over a pot of Rooibos at Dobrá Tea in Burlington.

SEVEN DAYS: You’re the new director of the Office of the Creative Economy. What does that mean?

LARS HASSELBLAD TORRES: I think that means a couple of things, at a high level. [The office] plays a role as a doormat for people looking for information about film. This is in part the result of the unique skill set of the past director. Some of those inquiries turn on permitting — what do I need to be able to shoot here in April? — location scouting and incentives. Those seem to be the three questions that are on my phone right now.

The more exciting piece is, how do we transform that entertainment-industry-facing office into something that’s broader and more relevant to the creative sectors that exist in Vermont today?

LHT: There are three that have been identified as priorities. Film and new media — emphasis on the new media. Advertising and marketing, which I’m not sure I completely understand, but it involves graphic designers, principally, illustrators, these kinds of folks. The third is software and game development.

There are lots of other areas that aren’t represented by the Office of the Creative Economy — performing arts, visual arts. And I think one of the reasons is, we have the Vermont Arts Council, we have the Humanities Council, we have local arts organizations, so there’s sort of an ecology there. We don’t really have a good ecology formed around these other sectors.

SD: Why is the state interested in developing them?

LHT: I think for a couple reasons. One, they create employment. Second, they create wealth, and there’s economic value there.

They’re green jobs. They’re good jobs to have in Vermont. They require a skill set that can be learned in our institutions of K-12 and higher ed, but, at the same time, they are jobs that you can grow into. You can retrain a workforce that perhaps isn’t doing well in agriculture, or somewhere else — maybe there’s an opportunity to advance those skills in service of a larger entity. If you were a dairy person, maybe you can become a marketing person for a cheese co-op.

SD: What do you think are the biggest opportunities?

LHT: A big one is new business starts. It’s a common theme that if you have skills in coding, in design, you’re not very far off from the capacity of building your own business and being self-employed, if you want.

Another goal is going to be in K-12 education, preparing young Vermonters for jobs at some of these great employers we have — IBM, for example. What kind of academic path is going to enable them to pass the math test so they can get into the programming jobs? A third opportunity is around post-secondary education and this notion of retaining more of our young workers. Creating internships and playing a matchmaking role in ensuring that young graduates know about opportunities at some really exciting companies.

Another opportunity is to encourage more seed capital for the formation of new businesses in Vermont. To be able to make that case to investors, we have to be able to tell a certain set of stories about high-growth companies that are here … that haven’t had to move to Boston or New York or elsewhere. Because of the nature of this [creative economy] work, you don’t have to be near manufacturing or distribution centers.

Maybe a harder-to-put-your-finger-on opportunity is, when Vermonters tell stories, do they tell a different kind of story? And if so, how can we promote those stories on the national stage? One role a film-commission-like entity could play is to champion the fact that [there are films with Vermont connections.]

I’m thinking of Safety Not Guaranteed. This film was scored by a Vermont musician and directed by a Vermonter. This idea of “made in Vermont” needs to extend beyond our food brands and into our creative output. Would Blair Witch Project have been a different film if it had been made by a Vermonter? Probably. How? Just kind of play around with the notion of the Vermont narrative.

SD: How can your office help with that?

LHT: In a couple of ways. The first is brightening the spotlight. Making sure that people know about what’s happening here in Vermont. A second —

SD: But how? Like, literally, how does state government do that?

LHT: As a spokesperson, that’s one way. So if I’m in Boston at a digital conference, I could clearly be speaking to audiences directly and using Vermont cases to tell those stories. “Let me show you Birnam Wood Games, which went from a woman-owned company of one to Y in a period of two years because X.” Inspiring stories.

A second is through writing and creating publications. One of the things I’ve loved to do in my various jobs is to write monographs or case studies, little briefs that shine the spotlight on actors or policies or illustrative examples that inspire people to think in those terms.

[Also] by interfacing more and getting into a position where I can speak on behalf of our organizations to the press.

I think being present at forums like Peak Pitch, which matches investors with entrepreneurs. Say, “Mr. Investor from Draper, you really need to talk to Toonuva Games, because they’ve got a game engine for building 3-D games that’s going to change the industry a year from now.” Who knows? Playing that matchmaking, one-on-one role at the right kind of forums, I think, will be really helpful.

This interview was condensed for print. Find an extended version, in which Torres reveals an innovation prize he’d like to create for Vermont, on the Vermont Tech Jam website.