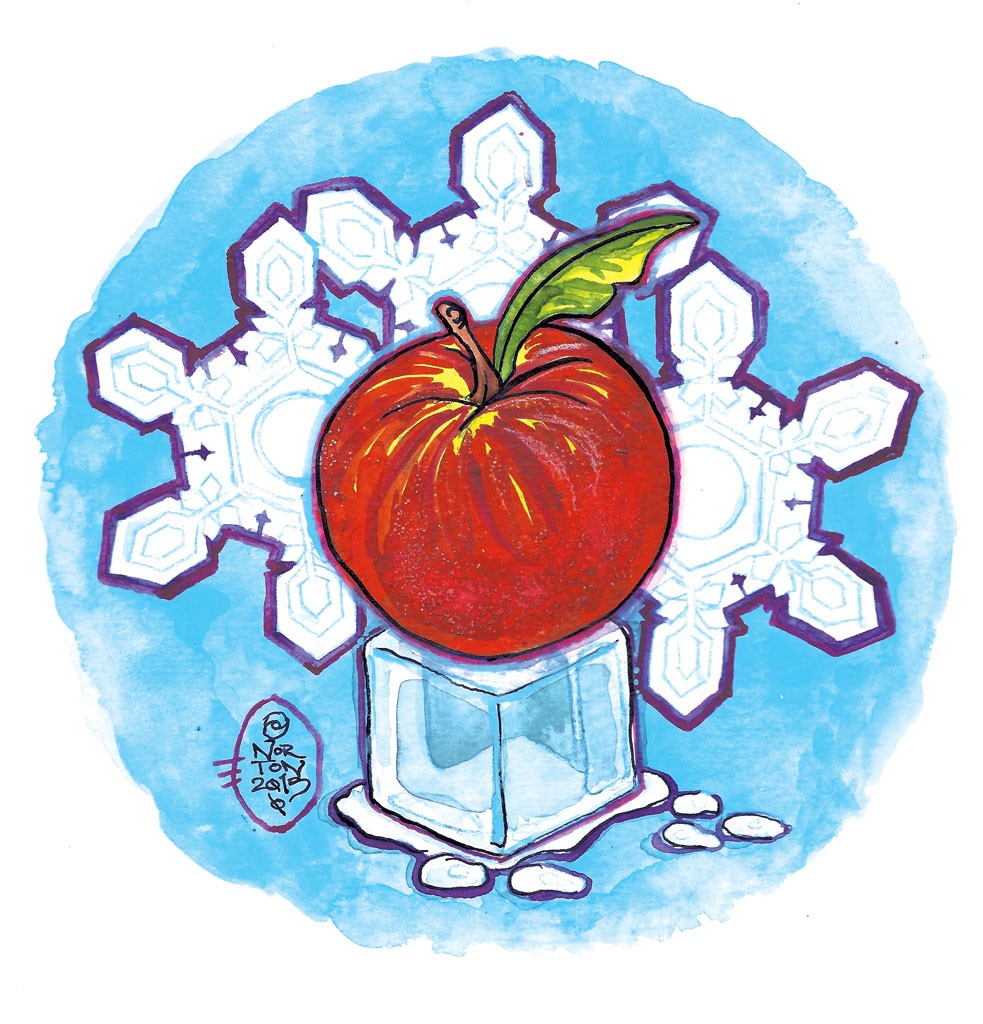 Among Vermont's new wave of ciders, many are trending toward desert dryness, dialing the sweetness down to nearly zero. But one subset of the local cider revolution is embracing the apple's natural sugar.

Ice cider, made with juice concentrated through an elaborate process of freezing and melting, is created, packaged, priced and sold as a dessert wine. Unlike hard cider, which enjoys a long and rich tradition, this apple drink is a more recent phenomenon. The first ice ciders emerged from Québec in the early 2000s, pressed from apples that were left to hang and freeze on the trees and harvested in winter.

This side of the border, ice cider makers do things a little differently. Apples are picked in autumn and pressed right away. But instead of fermenting the liquid then and there, cider makers store it in cube-shaped plastic tanks, leaving those outside to freeze during the winter. Later, they melt the juice under controlled conditions. Sugar falls out of solution first, creating the concentrated super-juice (about 20 percent of the original liquid) that cider makers use as their base. Because of the high initial sugar levels, they stop fermentation before the yeast eats up all of it. When alcohol and sugar reach just the right balance, the result is a sweet, apple-forward drink. 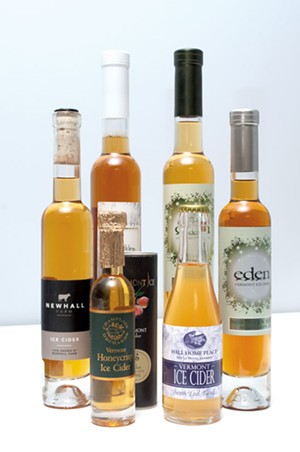 "For us, it's about the flavor of the apples," Eden Ice Cider co-owner Eleanor Leger told Seven Days in Burlington last week. "We're excited about apples, and we want to showcase that flavor."

Leger was in town, along with folks from Shoreham's Shacksbury Cider and Websterville's Vermont Creamery, among others, to celebrate winning a 2015 Good Food Award. That nationwide competition recognizes products with exceptional flavor and producers who embrace socially and environmentally responsible practices.

Founded in 2007, Eden is Vermont's biggest, best-known ice cider producer. With a cidery at Newport's Northeast Kingdom Tasting Center and an orchard in West Charleston, Eden makes ciders that are available in 18 states around the country. They've earned space on wine lists at Michelin-starred restaurants such as New York's Gramercy Tavern and Del Posto.

As the product gains recognition, more Vermont orchardists are turning to ice cider for an additional income stream. "We have more ice cider producers in Vermont than any other state," Leger said. "And you don't have to say 'per capita' after it. So it should be our thing."

With fewer than a dozen producers, ice cider represents a small fraction of the state's cider output. But for farmers and small-business owners, a big draw is the fact that ice cider can be made in micro batches and sold at a decent profit margin. Unlike hard cider, which is consumed like beer and must be sold at a similar price point, ice cider plies the dessert wine crowd, who are accustomed to dropping $20 to $30 on a 350-milliliter bottle.

Leger and her husband (and Eden cofounder and winemaker), Albert Leger, first encountered ice cider in 2006, on a trip to Montréal to visit his family. That first taste was a Goldilocks moment: Ice cider seemed to fill a hole in the puzzle that the couple was piecing together.

At the time, the Legers were in the process of buying a 150-acre abandoned farm near Lake Willoughby. They hoped to use the land for something productive. "We loved apples and [were] thinking, OK, we'll plant some trees; that'll be fun. But what can we do with trees?" Eleanor Leger recalled.

A former software consultant, she had been running numbers on hard cider and apple brandy. Cider presented an unrealistic economy of scale, and the years of lag time between fermentation and sale ruled out brandy. Leger had never heard of ice cider, but when she tasted it, she knew: "This is that small-scale, niche, high-priced product," she remembered thinking.

And Vermont is an ideal place to make the stuff. "This is something that's unique to this region," she said. "We have an incredible history of apple growing here. And lots of cold weather. You could believe that the best ice cider in the world could come from here!"

As Leger laid out her logic, it was easy to see why she's also ice cider's most effective champion. In 2008, the Legers began working with the Vermont Agency of Agriculture to educate orchardists and others on the ice cider process. In 2009, she worked to found the Vermont Ice Cider Association, which is now becoming the Vermont Cider Association.

One of ice cider's early adopters was Hall Home Place, in Isle La Motte. Co-owner Carol Stata grew up in the Champlain Islands on land her family has worked since the 1700s. "We believe the orchard was planted in the 1870s," she said via phone last week. Stata's brother, Allen Hall, continued operating the farm after their parents stopped, but times were tough. "We wanted to keep the orchard in the family," Stata said. "We were trying to find a way to help make it pay for itself."

The Halls opened a seasonal café on the property in 2008. And when they learned about Vermont's infant ice cider industry later that year, Stata contacted the Legers. "They became our mentors," she said. Hall Home Place debuted its first ice cider in 2009.

Like many other ice cider makers, Hall Home Place has since introduced a hard cider and apple wine, made with the extra liquid not used in ice cider production. "As we started doing this, we were, like, We have all this leftover juice, and we didn't want to waste it," Stata said.

Diversification also drew Boyden Valley Winery & Spirits — which makes ice wine and cider under the Vermont Ice label — into the game, according to owner David Boyden and wine room manager Bridget Jones. Ice wine is labor intensive and unpredictable, however, and the Boydens have been fermenting apple-maple-sap wine and other apple beverages with fruit from Brown's Orchard & Farmstand, in Castleton, since 1996. When Vermont Ice added cider to its line in 2007, it was a natural fit. "We had so much history with apples, and knowing what we want to get out of them," Jones said. "[Our ice cider] is a nice blend of apples, which gives you this full apple flavor. It's like taking a bite of a very fresh, very sweet apple."

How do these drinks stand up against each other, and against a traditional dessert wine? For a comparative tasting of seven Vermont ice ciders, Seven Days sat down with Dedalus Wine's Jason Zuliani, Abby Kellie and Scott Doherty. (Doherty is also the beverage director at Bluebird Tavern, where Zuliani is vice president and wine director.)

The session revealed a couple things. First, that these ciders are in a different class than grape-based dessert drinks — strong, sweet apple forms a solid baseline for all of them, with deviations running the gamut from syrupy to savory. Second, that taste in ice wine is, as with all wine, subjective. On one tongue, a sip might reveal notes of coriander; on another, mushrooms. Read on for our tasting notes.

Golden amber and honey in color, made with apples grown on 50 acres of the historic Allenholm Farm in South Hero.

Scott: Caramel and butterscotch on the nose; dense sugar and canned-fruit syrup. Acid and sugar out of balance.

Scott: Brown sugar on the palate, too sweet with low acidity.

Hannah: Lighter body, mellow acid and green apple. One note, but quite agreeable.

Scott: Subtle apple and oak on the nose. Tart apple and mulling spice on the palate.

Scott: Funky metallic apple on the nose. Canned apple, can included on the palate.