Vermont's Chief Justice Is Speaking Out Against the Drug War: Is Anyone Listening? | Politics | Seven Days | Vermont's Independent Voice

Vermont's Chief Justice Is Speaking Out Against the Drug War: Is Anyone Listening? 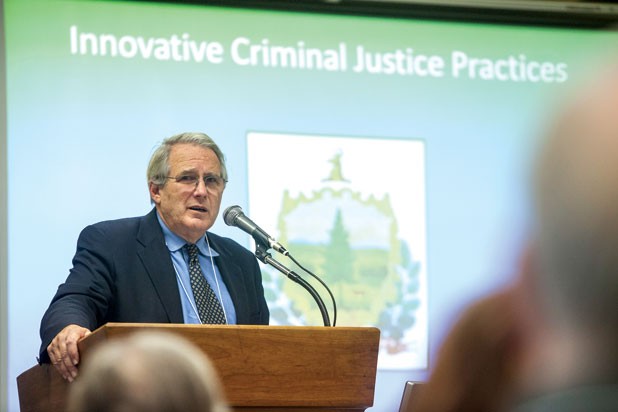 In recent weeks, Vermont Chief Justice Paul Reiber has gone public with an unusually assertive critique of the war on drugs and the “tough on crime” approach that has defined criminal justice for decades.

Reiber, who holds an office in which occupants usually avoid saying anything remotely controversial, has stopped short of recommending policy or criticizing any individuals or government bodies. But in a pair of speeches and a brief interview with Seven Days, he has declared ineffective the current reliance on police and punishment, and touted the merits of treatment-based models for dealing with crime rooted in substance abuse.

“Even with our best efforts, we are losing ground,” Reiber told a crowd at Vermont Law School last month. “The classic approach of ‘tough on crime’ is not working in this area of drug policy. The public responds very well to this ‘tough on crime’ message, but that does not mean it’s effective in changing individual behavior. If the idea is law enforcement alone will slow and eventually eliminate drug use altogether, that isn’t going to happen … The criminal justice system can’t solve the drug problem.”

But, backers say, his entrance into the politically fraught debate about drug policy lends a powerful voice to their cause.

“The public sees them as more of an authority figure and having a better understanding,” State Rep. Alice Emmons (D-Springfield) said of Supreme Court justices. “They command more respect than a legislator or commissioner, and they are held in high regard.”

After initially declining an interview request, Reiber spoke with Seven Days and explained his reasons for speaking out.

As top administrator of the court system, Reiber said he is worried that failures to curb addiction have led to wave upon wave of both criminal and family court cases that have pushed the system to a breaking point. Often, he said, the Vermont judiciary takes too long to provide resolutions that don’t end up fixing anything.

“It’s a fine line that we have to walk; we don’t make policy,” Reiber said in an interview. “Our oath says that we will defend the Constitution, and if you look at the Constitution, my responsibility and the responsibility of every judge is to protect the system as well as make independent decisions on the issues that come before us. I guess I’m trying to do what’s right in my mind for the state.”

Sitting and Standing Up

A native of Pittsburgh, Pennsylvania, Reiber earned his law degree from Suffolk Law School in Boston and worked in a Rutland law firm from 1986 until 2003, when former governor Jim Douglas, a Republican, appointed him associate justice. Although Reiber’s political leanings are not clear, observers say the vast majority of Douglas’ appointments — as with most governors — came from within his party.

The appointment made Reiber the leader of the five-member Supreme Court, which hears appeals from Vermont’s criminal, civil and family courts. The job also came with an administrative responsibility: The chief justice is the head administrator of the court system and oversees the judicial budget.

It was in that capacity that Reiber first came to public attention outside the Supreme Court’s chambers.

In 2009, he became the first chief justice in 20 years to address both chambers of the legislature, which faced deep budget cuts as a result of the recession. Reiber advocated consolidating the state’s 60 separate courts under one management system, culling the number of probate court judges and stripping independently elected assistant judges — commonly known as “side judges” — of much of their power.

Those ideas were well received and largely implemented. Reiber said his more recent speeches, which he delivered in September at a drug court conference in Boston and at Vermont Law School earlier this month, are an extension of those efforts.

The court system, he said, cannot operate efficiently for everyone if it continues to see cases from the same group of repeat offenders who have been unable to beat their addictions.

“This is an access to justice issue for me,” he said. “This is happening in numbers that’s alarming to me, and I think I have an obligation to defend the judiciary.”

Statistics from the Vermont judiciary show the root of Reiber’s concern. Felony filings have jumped nine percent in the past four years, and more than half of that spike came in the form of drug cases. Abuse and neglect cases, meanwhile, are up 33 percent in the same time frame. While difficult to pinpoint, experts say many of those cases are children suffering at the hands of drug-addicted parents. (Reiber said he recently observed a day in Addison County juvenile court, where the docket has grown in recent years, and watched parents who are about to be incarcerated give up their parental rights.)

In his Boston speech, Reiber highlighted reforms in Portugal, which in 2001 abolished criminal penalties for possession of all drugs, and replaced incarceration with drug treatment. Vermont’s chief justice called the results of that experiment “astonishing,” citing a study from the libertarian Cato Institute showing that Portugal experienced a large drop in drug use and a spike in the number of people seeking treatment.

During that speech, Reiber even said that American drug courts — in which nonviolent defendants charged with drug possession are diverted out of the court system and given a chance to turn their lives around — don’t go far enough. Only broader changes, he said, will have an impact.

“Drug use addiction and associated crime are outstripping our best efforts to address these problems through the drug court model. Given the explosion of drug addiction, should we not assign a failure on the part of the system we have employed to address it?” he told the crowd. (His speech also referenced work from a Duke University law student who has researched drug legalization. The law student is now working in the Vermont judiciary — as Reiber’s clerk. Reiber said it was a coincidence, and he was unaware of her research until after he hired her.)

When asked if he supported a Portugal-style drug legalization in Vermont, Reiber demurred.

“That’s not my job. That’s for somebody else to decide,” he said.

But, as he is doubtless aware, Reiber’s job title assures his comments are assigned more importance by both insiders and the public.

“What he said in Boston was really remarkable, both for its content and his position,” said former Windsor County State’s Attorney Robert Sand, who attended the conference as part of his position spreading alternate justice practices in the Department of Public Safety. “To have the chief justice saying we at least need to consider a fundamentally different approach to drugs and the idea of prohibition … that’s pretty significant. I was stunned by the substance of what he said. It was a remarkable thing.”

John Broderick knows well the line Reiber is trying to walk. During his six years as New Hampshire’s chief justice, Broderick launched a few public campaigns of his own to alter the judicial system.

Most notably, Broderick said he irked some attorneys when he launched a program to aid poor defendants who could not afford legal counsel. Under Broderick, the judiciary streamlined the forms that legal defendants fill out, to save them money, passed rules “unbundling” legal services, to allow at least some partial access to lawyers, and visited nearly every firm in the state urging attorneys to do more pro-bono work.

“I didn’t hear anyone in the legislature or governor’s office speak up,” Broderick said. “There was a time when the chief justice could sit back and read and write opinions. The issues that come before the courts now seem to have a systemic impact. I think the job of chief justice has changed. It comes with some risk, and one of the risks is you will be criticized. Some people think a chief justice should be seen and not heard.”

But the public is hearing more from sitting judges, especially from those on the U.S. Supreme Court.

Justice Sonia Sotomayor recently published a memoir. Justice Ruth Bader Ginsburg has openly discussed gender equity and other issues that have come before the court. And Justice Antonin Scalia has long spoken publicly about his views on the Constitution.

Vermont Law School Professor Cheryl Hanna said lawmakers shouldn’t hold Reiber’s public positions against him. As long as he refrains from commenting on specific cases or suggesting that drug laws be interpreted in a certain way, Hanna said, he is within his rights to speak.

“I think there’s a misperception that judges should sit in hearings, not say anything and handle the cases that come before them. It misunderstands the reality of the relationship of equal branches of government, and misunderstands the necessity for judicial leadership,” Hanna said. “Judges have to take leadership for how justice is served in the United States. They have to serve as a check on the executive and legislative branch.”

Their view, from a perch atop the court system, is one worth sharing, Hanna said.

“If we see problems with the administration of justice and remain silent,” Broderick said, “who will speak out?”