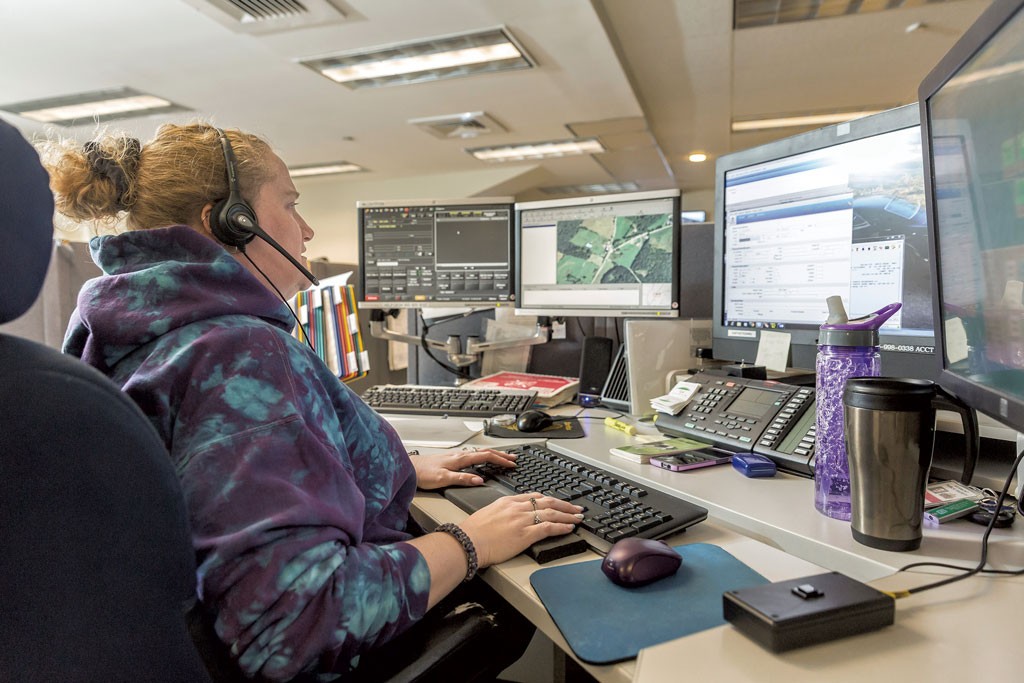 Reps. Mike Marcotte and Butch Shaw have spent years advocating for greater government efficiency. So the two Republicans acknowledge the irony in their fight to save two emergency dispatch centers.

In January, Gov. Peter Shumlin proposed closing Vermont State Police call centers in Derby and Rutland. He said the plan would save $1.7 million by cutting 14 jobs and shifting others to the remaining state public safety answering points, in Williston and Rockingham.

Marcotte and Shaw fought back. Two weeks ago, they won a temporary reprieve in the budget passed by the House. They are unapologetic, arguing that the plan jeopardizes both the economy and public safety.

"I represent my district," said Shaw, a three-term House member from Pittsford and an assistant fire chief. "This consolidation negatively affects my district."

The 14 full-time and 16 part-time jobs at the Derby call center bring in $1 million a year in income to the local economy, said Marcotte, a six-term member from Coventry who serves as selectboard chair and owns a convenience store there.

Welcome to the budget-cut conundrum. For many reductions proposed, legislative leaders say, there's a chorus of voices to save a program — even, at times, from those who favor smaller government.

"That's what we get every time we propose a cut. Some of the people saying, 'No, not this cut' were the same people saying, 'Cut the budget,'" said House Appropriations Committee chair Mitzi Johnson (D-Grand Isle). "My response to them was, 'Yes, this hurts. This is what smaller government looks like. This is what you've been asking for.'"

This year, with a $113 million budget gap prompting many proposed reductions, plans to ax funding for programs such as the Community High School of Vermont, the Vermont Public Broadcasting Service and state employee pay have all met firm resistance.

For starters: When a specific region stands to lose revenue or jobs, legislators from that area naturally jump to attention.

That was the case with the Vermont Veterans' Home in Bennington. Shumlin had planned to use state lottery proceeds to help fund the nursing home. But the House refused to agree with that plan. Members were ready to cut VVH's funding by $1 million.

Rep. Mary Morrissey (R-Bennington) went to bat for the home, which is in her district — even as she also criticized rising taxes.

"It's hard in tough budget years to be looking for funding in your area," Morrissey said. Still, she concluded that a home for veterans was a priority over funding for a health-insurance exchange that isn't working properly. "We have to prioritize," she said.

The House Appropriations Committee found $1 million in one-time funds for the home.

Pushback on the proposed call center consolidation has taken a more circuitous route. Opposition was strong enough that Johnson's committee found $425,000 to keep the two centers operating until September, buying time for officials to figure something out. That could mean either fees or county taxes to support the facilities.

In other words, any savings in the state budget would be transferred to local budgets. "Yes, it's a cost-shift," Johnson said. "But those local communities were coming to us and saying, 'Give us a chance.' Some people from those communities were willing to pay."

The plan Shaw and Marcotte forged directs state public-safety officials to meet with regional groups and figure out by September 15 whether it makes sense for communities to contract with the state for dispatch services. Shaw concedes that date might be too soon to find a solution. He hopes the Senate will find more money to buy time.

Marcotte said he was conscious of the tight state budget when he came up with this alternative.

Shumlin is standing by his consolidation proposal — as is Public Safety Commissioner Keith Flynn. Vermonters asked the governor to find efficiencies in government, Shumlin says, and he did. He vows the move won't jeopardize public safety, as advocates claim, and it will, in fact, save money.

"The only way government can find efficiencies is by doing things with less resources, which often means less jobs," Shumlin said. "There's obviously understandable resistance from the folks who are being affected. However, if we can't do things smarter, more efficiently, for less money, the taxpayers are not going to be happy with us."

Melissa Sharkis, an emergency communications dispatcher in Rutland, certainly isn't happy. She and many coworkers in Derby and Rutland are unlikely to transfer to Williston or Rockingham because the commute would be too long. Sharkis questions how the state will manage to train so many new call-takers at once.

"The things that make a good dispatcher are hard to screen for," she said.

Jim Cronan, administrator of the Williston state police emergency call center, said one of the first calls he handled as a new dispatcher in 1992 was from a motorist who had found a woman who had been raped, tied up and dumped on the side of the road. No troopers were on duty when the call came in at 3 a.m., but a detective helped him through the ordeal.

Typically, trainees need four to nine months before they can work on their own, Cronan said. Dispatchers say that will be a problem if the consolidation plan is approved.

Sen. Kevin Mullin (R-Rutland) said such complications make it hard to fathom that consolidation would really save $1.7 million next year. "We can't even see how they're getting to half a million," he said.

Mullin hopes the Senate will find more money to put off the consolidation beyond the September date the House approved. Senate Appropriations Committee chair Jane Kitchel (D-Caledonia), whose district is now served by the Derby call center, said her committee has made no decisions.

Flynn and Shumlin stand by the cost-saving estimates. "I'm positive it will save money," Shumlin said. "It will save $1.7 million every single year for Vermonters, and it won't sacrifice safety one iota."

State Police Capt. Donald Patch, who oversees the call centers, said Harris' call went to a secondary radio channel on which the volume had been turned down while the dispatcher was tuned into the primary channel. "The same thing could have happened any day of the week," he said.

Officials around Rutland and Derby have criticized the decision to close centers in high-unemployment areas while shifting jobs to Williston and Rockingham. Flynn said Williston was chosen because it has the best technology. Rockingham's call center is due to be replaced soon by a state-of-the-art facility in Westminster.

"Everything gets cut, but not in Chittenden County," said Rep. Bob Helm (R-Fair Haven). "Rutland has no way to absorb this."

Helm, who serves on the appropriations committee, acknowledged that he is fighting the very sort of cuts he's been calling for in state government. This one is worth battling, he said. "We all heard from firefighters and police and regular people sending us a pretty strong message to save this," he said.

Correction, 4/9/15: Jim Cronan is a civilian employee of Vermont State Police. An earlier version of this story contained an error.