Quiz: How Well Do You Know Vermont? 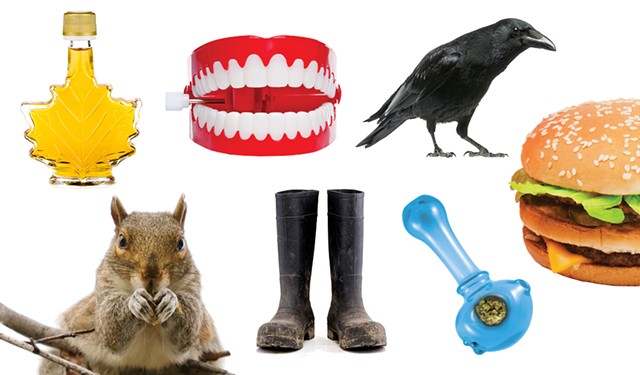 Being a Vermonter isn't all Ben & Jerry's and weed. OK, it kind of is. But there's a bunch of other important stuff you need to know, too, lest you forever be seen as a flatlander — Vermonters' term for an outsider. Before venturing into the wilds of the Green Mountain State, take this very official (unofficial) Vermont quiz to test your knowledge of your new home. Score a passing grade, and you should probably check your veins for maple syrup. Fail it, and ... well, we hear New Hampshire is nice.

3. "Mud season" is what Vermonters call:

4. It's safe to take off your snow tires in:

5. Suffering a Big Mac attack? You won't find a McDonald's franchise in:

7. While hiking in the woods, you encounter lines of blue plastic tubing. They indicate that you've stumbled upon:

8. A mention of the "Eye on the Sky" on Vermont Public Radio refers to:

11. Vermonters put their bird feeders out on December 1 and bring them in no later than April 1 to avoid attracting:

13. Which of the following is illegal in Vermont?

14. Green Up Day, held annually on the first Saturday in May, is when:

16. The town of Charlotte rhymes with:

17. The town of Calais rhymes with:

18. The town of Montpelier rhymes with:

Congratulations, you're one of us! Your biggest challenge is that you can't visit the co-op or the town dump without running into a dozen people you know.

You're skiing in jeans. Keep studying your What's Good survival guide to improve your score.

These woods aren't safe! Shouldn't you be heading back to New Jersey soon?