Vermonting: Waterfalls and Hoagies Around the Appalachian Gap

My whip, Edith, is a 2004 Volvo station wagon with 250,000-plus miles on her odometer and a dented passenger door that doesn't shut properly unless you slam it with g-force. I did not choose Edith; she previously belonged to my mom, who bequeathed her to me in my senior year of college as a tactical divorce move.

During my last semester at Middlebury, when I hated everything so much that I flirted with the idea of dropping out, I often drove Edith 10 pretty miles north on Route 7, then east on 17 to Bristol, where I would indulge in some light, restorative truancy. This truancy, I should emphasize, was very light; the craziest shit I ever got up to was cutting class for a day and drinking two chai lattes at Bristol Bakery while finishing a New York Times crossword puzzle, without notifying anyone of my whereabouts.

Seven years later, Edith and I are still a thing. Last Thursday, I took her on a jaunt to Warren by way of Bristol, where I revisited the scene of my 22-year-old malaise. Bristol's Main Street has always reminded me of Richard Scarry's Busytown — a place where people constantly seem to be waving at each other as they go about their errands. The Bristol Cliffs Wilderness looms above the historic buildings of downtown, not in a creepy, ominous way but in a nice, protective way, like an incoming hug from a very tall being.

My first stop, of course, was the former Bristol Bakery, which now goes by the slightly-less-snuggly-sounding name Bristol Cliffs Café. The interior felt exactly the same as it did when I drowned my sorrows in chai — warm and sunny and cozy, its familiar brick walls covered in local art.

When I arrived, in the pre-lunch doldrums between 11 a.m. and noon, the featured display was a series of "Calvin and Hobbes"-esque cartoons by Judah Jackson, the son of Lincoln-based artist Rory Jackson. (Woody Jackson, a painter known for his Technicolor farmscapes and happy Holsteins, is Judah's great-uncle.) 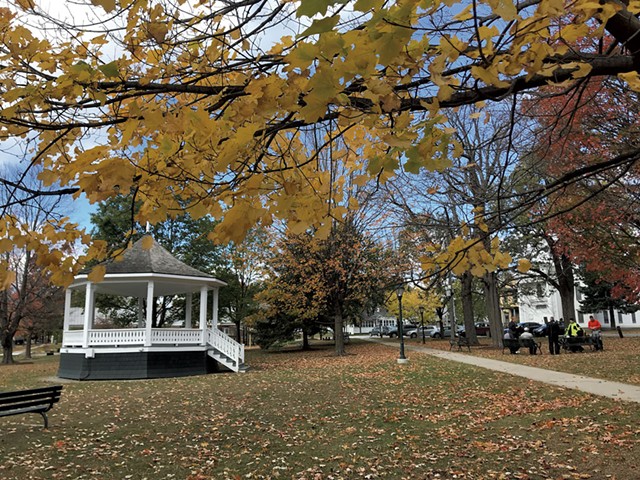 I ordered a kale Caesar salad, a concession to the impending lunch hour and the concept of dietary fiber. Because of COVID-19, the café doesn't allow indoor dining, so I took my salad over to the town green, which looks like it fell directly out of Norman Rockwell's brain.

The green features an assortment of perfectly spaced benches and several lovely maples; there is also a playground, deserted at that hour, whose architecture boasts some of the best tree house vibes this side of Lothlórien. Near the center of the green is a gazebo that, according to the town's website, has served as a stage for outdoor concerts every Wednesday evening in the summer since just after the Civil War. I sat in the gazebo, happily shoveling forkfuls of aioli-dressed plant matter into my mouth and contemplating the muted but still gloriously ocher foliage.

Afterward, I wandered across the street to Recycled Reading of Vermont, a used bookstore and musical instrument shop with a formidable selection of board games and art supplies. Within seconds of entering, I was ensorcelled by the cover of a paperback on a display table near the entrance: Sloths: A Celebration of the World's Most Misunderstood Mammal. The back cover posed three tantalizing questions: "How old is the sloth? How do sloths have sex? How did a sloth save Dublin?"

Reader, I shelled out hard: $7 was an eminently reasonable price to pay for the secrets of slothdom. But before I did, I perused the selection of literature on animal husbandry, tested various ink pens and examined the vast collection of ukuleles for sale. The store owner, Melissa Hernandez, informed me that Bristol is home to the Vermont Ukulele Society, which, in non-pandemic times, convenes for strum-alongs every second and fourth Monday in Howden Hall Community Center.

My next stop was Art on Main, a nonprofit, volunteer-run gallery that sells work by local artisans. There, I became the proud mom of a blue-and-ivory glazed ceramic spoon rest, made by Lincoln potter Elizabeth Saslaw. Then, I meandered next door to check out Yarn & Yoga, a shop whose dual functions need no further elaboration.

Due to the breathiness of yoga, the store has lately focused on the yarn half of its mission, according to co-owner Anne Wallace, who was knitting a gray color-block cardigan when I poked my head in. I am a mediocre knitter at best, but the mere sight of dyed wool and its warm, clean smell lowered my blood pressure instantly.

In other times, I might have sidled up to the bar of the Bobcat Café & Brewery for a midday IPA, but the eatery has shifted to a takeout-only model. So I hit the road for Warren by way of the Appalachian Gap, but first, I took a small detour on Lincoln Road to ogle Bristol Falls, one of my favorite swimming holes in Addison County. On hot summer days, the rocks around the cascades are usually crawling with people, but this time of year, and especially on a weekday afternoon, you'll likely have this magical spot all to yourself. 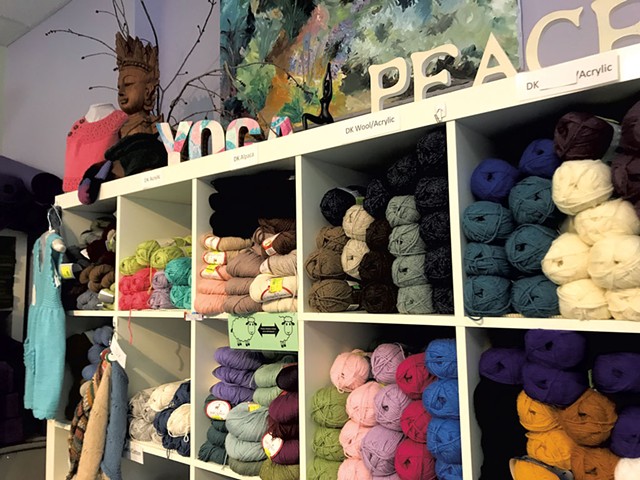 Less than two miles from downtown Bristol, I parked in a turnout and hiked a dozen or so yards into the woods, where I reached the edge of a 15-foot drop. I took a few blissful inhalations of river mist and piney air, and then set off again.

I took a few blissful inhalations of river mist and piney air, and then set off again. tweet this

As Edith and I negotiated the steep hairpin turns of Route 17, I took in the late-fall beauty like a newborn, googly-eyed and slack-jawed. I rolled down my window as I crested the top of Appalachian Gap, elevation 2,375 feet, and whooped at a trio of cyclists, who looked as if they were about to perish. I rode with my windows down almost all the way to Waitsfield, until the burning-carpet smell of Edith's brake pads compelled me to roll them up again. (Sorry, Edith.) 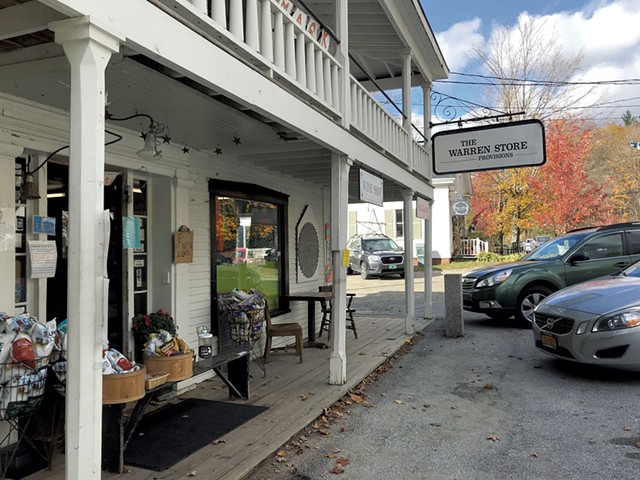 In Waitsfield, I picked up Route 100 and drove five miles south into Warren, a button of a village in the shadow of Mount Ellen and Sugarbush Resort. Downtown Warren is arrestingly quaint. Its social and commercial hub, the Warren Store, a two-story house with wraparound porches upstairs and down, has utterly nailed the country store gestalt. Upon entering, I was greeted by a display of old-fashioned hard candy sticks and felt, briefly, as if I had wandered into an idea.

The Warren Store is notorious enough to sell branded merchandise, including children's T-shirts and adult cycling jerseys. The first floor is dedicated to comestibles; the second floor is a ramble of home goods and apparel — not just of the Warren Store variety — made from soft natural fibers.

Upstairs, I talked myself out of an intoxicatingly nice-smelling bar of Warren Store-brand spruce orange goat milk soap, then headed back downstairs to the deli counter to inquire about a sandwich. (One cannot live on kale salad alone.)

In my personal pantheon of foodstuffs, the Italian hoagie occupies an esteemed pedestal; when I saw one on the lunch menu, I ordered it reflexively. While I waited, I helped myself to a four-pack of Sip of Sunshine IPA from what might be the most beautiful refrigeration apparatus I have ever seen: a vintage wooden icebox with six brass-latched doors. Opening them required such ceremonious dexterity that I felt as if I were removing a relic from a chest. Then, I picked up my sandwich, which had the approximate heft of a baby, and took it to one of the picnic tables on the patio outside the store.

The patio overlooks Freeman Brook, which runs beneath Main Street and eventually empties into the Mad River. At my picnic table, warmed by the late afternoon sun and serenaded by the murmuring stream below, I pounded that hoagie. It was a triumph of the genre — the right ratio of salami to provolone to capicola, the correct number of red onions, the absolutely imperative quality of almost-staleness in the bread.

If my day had ended there, I would have been satisfied. But there was still more quaintness to absorb. I went next door to Forage and Finery, a boutique that sells silver jewelry and herbal skin potions made by women who both happen to be named Sasha.

Before heading back to Burlington, I drove a few more miles south on Route 100 to Warren Falls, another über-popular summer swimming destination, and found the parking lot nearly empty. I hiked through the sun-dappled woods and took in my second waterfall of the day, feeling obscenely lucky to live in Vermont.

My return trip, north along Route 100 to Interstate 89 in Waterbury, was no less sublime for the fact that I hotboxed my own oniony burps the entire way home. Edith, my long-suffering companion, did not complain.