Vermonting: Slippers, Tubing and Beer in the Mad River Valley 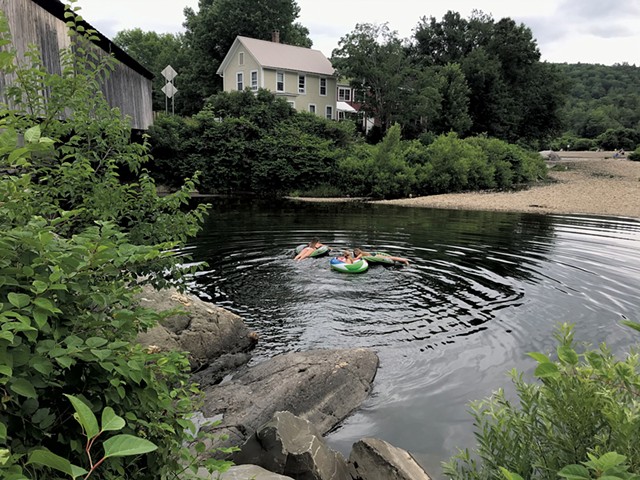 Every time I bop down from Burlington to the Mad River Valley for a visit I want to move there, so a daylong dose of the place was bound to leave me wanting more. Heading home one evening last week after spending a day there, I turned around on Route 100 for one more taste. But more on that later.

The Mad River Valley is a recreational paradise: ski mecca in the winter, hiking wonderland in the summer. The area is also home to a number of visual and performing arts organizations, including Yestermorrow Design/Build School, the Valley Players and Valley Arts.

The outdoors is always open, of course, and hiking options in the Mad River Valley range from dirt-road village walks to summiting high peaks. Arts groups have limited (or no) offerings this summer due to the coronavirus pandemic. Yet it's possible to spend a few hours in the valley mixing arts with the outdoors.

My day began at the Artisans' Gallery on Bridge Street in Waitsfield, which exhibits and sells the work of Vermont painters, textile artists, jewelers, woodworkers, ceramists and more. Housed in a former general store built in the 1830s, the gallery was founded 25 years ago by six local women.

Browsing in the shop, I realized it was the first "nonessential" store — except for a garden nursery — I'd been in since the start of the pandemic.  Several items were tempting: a pizza slicer, a salad bowl, a black T-shirt.

Then I spotted what I had to have: a pair of thick sheepskin slippers made in Richmond. I also chose two cloth face coverings — in leopard print and plain black — whose purchase benefits two nonprofits, World Central Kitchen and Mad River Valley Community Fund. Thus I was equipped for these summer days and the winter months to come.

Peggy Potter, a founding partner of the gallery, was working the day I stopped in. An artist known for her painted wooden bowls, Potter noted my purchase and told me I'm part of a little crowd that's been buying slippers in July. "I think people are craving things that represent comfort," she said. 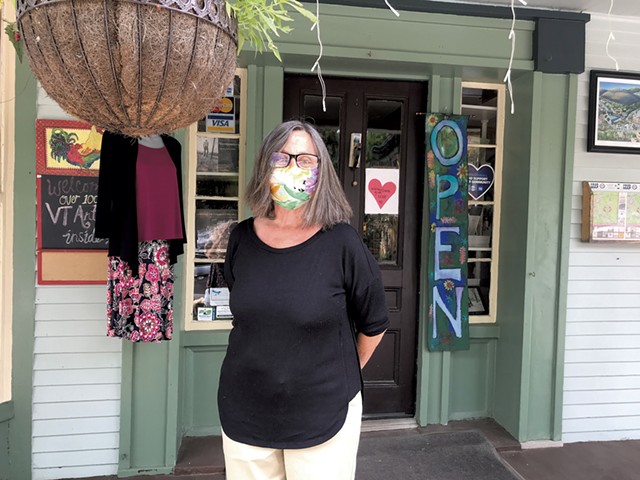 Some customers, Potter noted, have been interested in high-end paintings. These purchases "tell a kind of story," she suggested.

I threw my slippers in the back of the car and set off on valley adventures in my flip-flops — easy to slip off for the ultimate comfort: bare feet.

My next stop was the Bundy Modern, an art gallery in a private home set on a rise on 12.5 acres off Vermont Route 100. The high-ceilinged brick building, built in 1962, was designed by Harlow Carpenter, a sculptor and Harvard University-trained architect. Carpenter was also an investor in and cofounder of Sugarbush Resort. 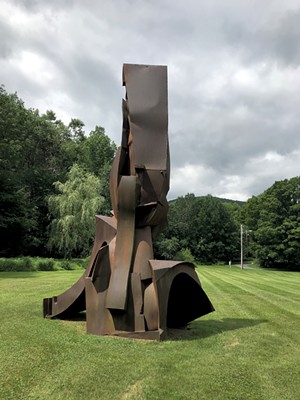 Wendell and June Anderson own and operate the gallery now; they purchased it in 2014 and converted part of the building into their home. "We've become gallerists," said Wendell, whose background is in construction.

Open this summer by appointment, the Bundy mounts one exhibit per year. On view right now is "Triad 2020: Paintings by Patrick Dunfey, Pam Glick and Richard Jacobs." The paintings hang on the walls of the main gallery, whose floor-to-ceilings windows are fronted by a Johnny Swing couch made of welded coins. The windows overlook a pond and sculpture garden.

Outside, despite a social-distancing mandate, I couldn't stay away from Nico, the Andersons' 4-month-old black Lab puppy. Nico took special delight in biting my shirt as I took in a sculpture by Italian artist Colombo Manuelli.

Wendell told me he discovered the piece in the woods. "I look down the hill and I see metal, and I'm like, 'What the fuck?'" he recalled. He investigated with his ATV and a wench, pulling the mysterious object up and out of the ground. Now it's hanging in a frame by the driveway. More than a dozen other sculptures are sited on the grassy grounds.

If the world ends tomorrow, I wouldn't mind being barefoot at the Bundy.

I said goodbye to Nico and Wendell and drove to the Warren Store for lunch. The always-reliable deli is open via a takeout window on the back porch. I ordered a roast beef and Swiss sandwich with a side of kale Caesar salad, and I bought a bottle of water.

Though the deck offers shaded picnic tables, I carried my food down a little path to eat by Freeman Brook. This lovely picnic spot was cool and private. After polishing off my sandwich, I came up from the water to eat dessert — a big chocolate chip cookie — in the sunshine on the bridge that crosses the brook. Above the span, painted banners hang from a cable; some have one-word messages: Love, Hope, Peace, Kindness, Freedom.

Driving back to Waitsfield to go tubing, I pulled over at Kingsbury Market Garden to take a little walk by the Mad River. The half-mile path passes farm fields, crosses behind a gas station and ends at Route 100 on the Warren-Waitsfield border.

Then it was off to Clearwater Sports on Main Street in Waitsfield, which offers curbside tube rental for $20 a day. By now it was 2:30 in the afternoon, giving me a couple of hours in the water — enough time for an aging rookie tuber.

I knew the water was low and I'd probably be lolling around, not shooting rapids. So I decided to pick up a paperback at Tempest Book Shop. Nothing in the outside bargain box of 50 cent and $1 books grabbed me; I went inside for a quick look.

I ended up without a book but interested in the one I overheard owner Rick Rayfield recommending on the telephone: a book about animal poop that's a dream tome for a 6-year-old.

(In a phone call the next day with Rayfield, I learned the book by Werner Holzwarth was originally published in German in 1989. Its English title is The Story of the Little Mole Who Went in Search of Whodunit. Rayfield, who's owned Tempest since 1986, said he always keeps a copy to read to kids in the shop.)

With my river time ticking away, I left the bookstore and drove to a parking lot by the Mad River in the center of town. From there, I walked down a little path to a rocky beach to launch my tube.

The water was shallow and calm, and I had to push off a few times to get some movement. I remembered from a long-ago canoe trip that fast-moving bursts of water often mean (and mask) a rock below or above the surface. I narrowly avoided impalement on a jagged one.

That was probably the most dramatic moment on the mostly still Mad River. I floated around as kids played nearby in the water. I heard two little boys make up a game in which they changed the name of scuba masks to "corona masks."

I took a couple of dips and floated some more, keeping time by the clock on the church steeple in town. I paddled under the covered bridge to a little swimming hole and back in the other direction.

At about 4:30, ahead of Clearwater Sports' 5 p.m. closing, I returned the tube. Then I headed to Lawson's Finest Liquids, where I met a friend for beer and bratwurst in the outdoor beer garden.

Reservations are required at Lawson's; the brewery also asks for the name and phone number of every person in the party, following the Vermont Department of Health regulations for potential contract tracing. We were seated near the front gate in a spot set off from other tables — though all locations looked well spaced.

Our server, like her coworkers, wore a mask and gloves. She kept her distance from us — probably more than six feet — while taking our order. The only time she approached the table was to set down food or beer and pick up my credit card. We pulled our masks up when she was near, per the brewery's instruction. This only slightly slowed my imbibing of a delicious golden lager, Scrag Mountain Pils.

The system at Lawson's is scrupulous in design and easy in execution. I told our server, Taylar Main, how impressed we were.

"We're trying to be conscious about giving people their space," Main said, while hoping to have fun and create an atmosphere that's "open and breezy."

On my way home, driving by Waitsfield's strip mall, I noticed that Canteen Creemee was open. I found a place to turn around and doubled back for one last valley thrill: a maple-chocolate twist. "She's Leaving Home" was playing on the snack shack's sound system.

If the world ends tomorrow, I wouldn't mind licking a creemee, looking at the mountains and listening to the Beatles.


The slower I go
the more I see.
The Pandemic has been like that, too.
We are all going slower now
and that slowing has helped us better see
the inequities of the world.
We see better that
Black Lives Matter,
that racism, like Corona,
has infected and made less well
just about everyone —
that justice for all would help all.
And seeing
that our modern economy
is on a collision course
with our essential ecology —
that as the Human economy has contracted
the vitality and health of nature has expanded.
And seeing
that policing is a great power granted by the governed
to its government
and must always be
for the good of all the people
it seeks to serve and protect.

— George Schenk, founder-owner of American Flatbread, wrote this poem on July 18, 2020. His "dedications" hang in his restaurant and are printed on the menu. Pizza is available for takeout and limited picnicking at Lareau Farm.

The original print version of this article was headlined "Mad Adventures | Slippers, tubing and beer in the Mad River Valley"