Vermonting: Pondering the Birth of a Nation at Mount Independence

The insects buzzed me and nestled in my scalp. I pulled dying bugs from my hair as I walked on the rise above Lake Champlain that was the site of an encampment during the American Revolution.

Still, a trip to the state historical site in Addison County is worth swats, bites and tangles for Vermonters who have an interest in state and U.S. history — and for those who enjoy a gentle (if occasionally itchy) walk in the woods. A six-mile network of trails on the roughly 300-acre site traverses hardwood and conifer stands and leads visitors past artifacts of the settlement.

I drove from Burlington to Mount Independence last week to take a walk and think about its history as Independence Day approaches. Located about 50 miles southwest of Burlington, the mount is situated at the end of a dirt road in rolling farm country. The sloop-shaped visitor center comes into view almost abruptly as you round a sharp, uphill curve. The center and the surrounding trails, along with Fort Ticonderoga across the lake, tell the story of the fortress.

The site was settled in the summer of 1776, when thousands of American troops began building an encampment at a place then called Rattlesnake Hill. The men cleared the land, constructed huts and a large hospital, and sited their cannons on the cliffs above Lake Champlain.

They built a floating bridge to connect this installment to Fort Ticonderoga, which was constructed on the New York side of the lake during the French and Indian War. On the narrows of Champlain, where a quarter mile of water separates the two shores, the forts were positioned to choke off the British in a potential attack from the north. Together, the two installations were temporary homes to 12,000 to 14,000 troops in the early years of the Revolutionary War.

On July 28, 1776, the men assembled on the Orwell promontory to listen to a colonel read a document that had arrived 10 days earlier by boat and horse from Philadelphia: the Declaration of Independence. From that day forward, the rise above Lake Champlain was known as Mount Independence. (Site administrator Elsa Gilbertson told me by telephone that she's uncertain why officials waited 10 days to read the declaration aloud.) 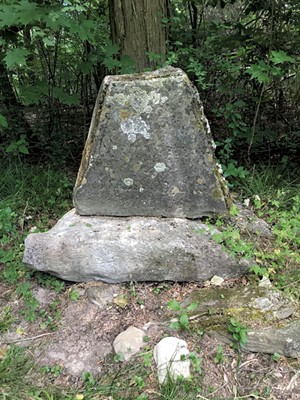 The visitor center, which opens July 1, houses tools, a cannon wheel, wine bottles, sections of the floating bridge and other artifacts. It was closed when I visited, so I stuck to the trails and limited my walk (because of the deerflies) to a 1.6-mile loop called the Baldwin Trail and a short spur path.

The handicap-accessible Baldwin loop passes a gravesite, relics of the hospital and building foundations. An offshoot path leads to the edge of the promontory, which affords a view northward of the lake and westward of Fort Ticonderoga and the 893-foot Mount Defiance rising behind it. The location was a strategic vantage point, but the Americans had failed to secure the high ground.

A sign at the lookout describes the scene in early July 1777: "[A]s Americans celebrated the one-year anniversary of the Declaration of Independence," the British built a road up Mount Defiance, placed two cannons on top and seized control of the site. According to the sign, American Col. Alexander Scammell "called the predicament 'a perfect mousetrap.'" The Americans retreated. (There's more to the story, including a blaze that illuminated the retreat; check it out at the mount.)

I took a last look at Mount Defiance, turned back to Baldwin Trail and followed it to the visitor center. At the back of the parking lot, I spotted a short path that led downhill to a clearing on the lake. The beach was bug-free and pleasantly breezy. I found a rock to sit on and stayed for a bit, alone at the bay except for a slow-moving boat with three fishermen aboard.

I thought about a phone conversation I'd had the day before with Mike Barbieri of Wallingford; he's been taking walks at Mount Independence for 40 years. "I go up looking for signs of occupation, of human use, and I note them," Barbieri, 74, said.

In April, walking in the woods there before foliage could obscure his view, Barbieri came upon a cannon site. He noted the features that led to his find — a stone wall, a gulley, a rock platform — and plotted them on a map.

Barbieri participates in reenactments at Mount Independence, at which the Declaration of Independence is read. The event usually takes place on a weekend date near July 28.

"It's neat to hear that document read under the same conditions that it was done in 1776," Barbieri said. "To hear it on the same ground, the same words, that's special." (It's unclear whether the event will be held this year due to COVID-19.)

I left Mount Independence and drove east about seven miles to the village of Orwell. My destination was Buxton's Store, a grocery and deli owned by Orwell native Andy Buxton. Three years ago, he purchased the store that his grandparents, Dick and Thelma Buxton, opened in 1968 and operated for almost 40 years.

Buxton's was offering a lobster roll special, so I ordered one. The roll was filled to overflowing with shellfish, sourced from Maine, along with chopped celery and onion, lettuce and tomato. I paired it with a Lawson's Finest Liquids Super Session #6 and a big bag of Cheetos. I brought my food across the street to the school grounds and ate at a picnic table under the shade of a tree.

On my way back to Burlington, I turned off Route 22A in Addison and headed west to D.A.R. State Park. But the gate was locked; the park was a day away from opening for the season.

I was about to leave when I saw a park ranger and asked him if it was OK to walk in for a swim. Sure, he said. I skirted the gate on foot and walked to the lake. The water was as welcoming as his answer.