Vermonting in Barre, a Day Trip Close to Home 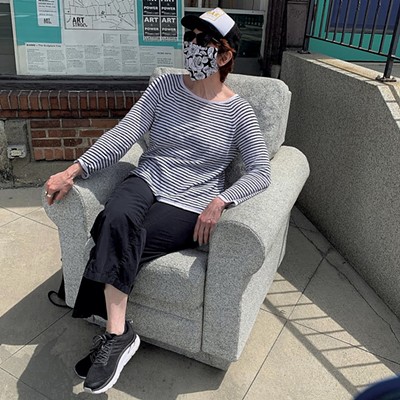 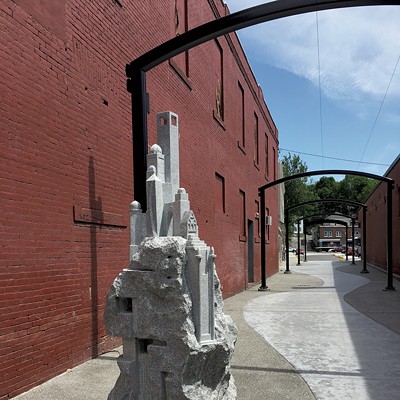 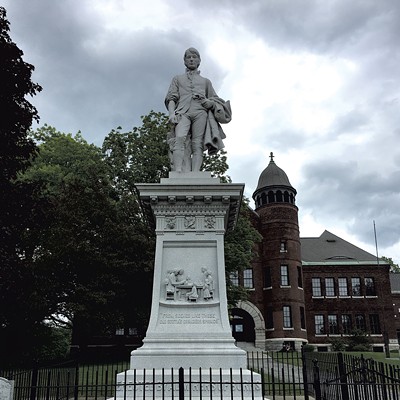 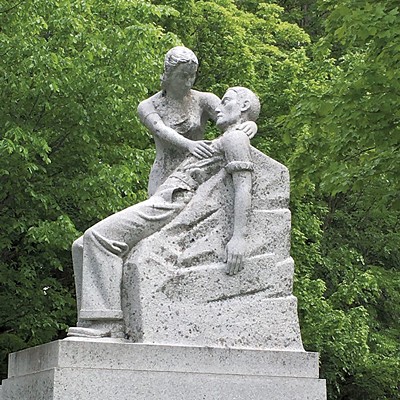 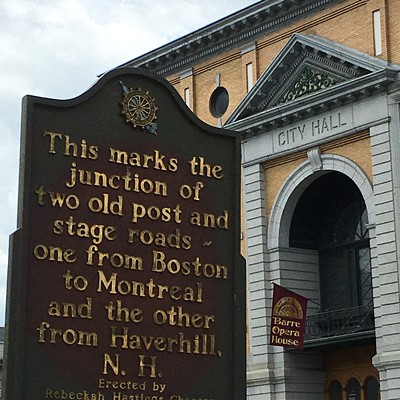 Spring in Vermont invites anthropomorphic description: The green is ebullient, the beauty fierce and proud. We've endured another long winter, it seems to say, and look at us now. Of course, we humans have also endured a pandemic, a quarantine, a smashing blow to the economy, and the alienation of social distancing and mask wearing. The entire country is in turmoil, marching in protest, demanding a long-overdue racial reckoning.

It was therapeutic and, yes, a privilege to set all this aside, if only for a few hours on a sunny day. Vermont's greenery felt like an embrace, a balm, even viewed from the car on Interstate 89.

From our home base in Burlington, we made the easy 45-minute drive to Barre and parked on North Main Street, the central artery of downtown. The meter told us that parking was free. Our mission was to take the Art Stroll around town, check out some recently reopened shops, get a takeout lunch and picnic in the famous Hope Cemetery.

It was no coincidence that our trip was bookended with granite sculptures; in its heyday, the Granite City was considered the granite capital of the world. The 19th- and early 20th-century industry attracted thousands of immigrant stone carvers, primarily from Italy but also from Scotland, Greece, Lebanon, Canada and elsewhere. That influx made Barre Vermont's most diverse city, injected its politics with color and created a community uniquely devoted to visual arts.

We headed first to Studio Place Arts, whose executive director, Sue Higby, is the project manager for the ongoing commissioning of streetscape sculpture. Though the gallery remains closed until June 16, she invited us in for a socially distanced tour of the exhibits on all three floors. They opened just a week before the pandemic shut everything down, Higby told us, and the exhibits will be extended through the summer.

Recommending an impromptu visit to next-door neighbor Vermont Salumi, Higby called owner Pete Roscini Colman for the OK. Colman graciously took a break from the renovation of the building that once housed the Homer Fitts department store.

The sausage making happens in the back, in a cavernous, lab-like room whose corrugated walls are blood red. Colman flipped on the lights in a walk-in cooler so we could peer through its window at dozens of sausages hanging from racks, deep in the invisible alchemy of curing.

Out front, Colman showed off the space that will become a bodega selling his meats, plus essential groceries and some prepared foods. A back bar and tables near the tall street-side windows await the governor's sanctioning of indoor gatherings. During the pandemic, Colman has provided curbside pickup.

Vermont Salumi's hip-but-not-fancy aesthetic and multipurpose space reflect a national trend and represent a hopeful development in a downtown pocked with empty storefronts. "This is just what Barre needs," Higby opined.

Thanking Colman, we headed outside and consulted our Art Stroll map. The sculptures nearest to Studio Place Arts include the life-size granite "Daddy's Chair," by local legend Giuliano Cecchinelli II, which is surprisingly comfortable; "Unzipping the Earth," by Chris Miller, a giant stone zipper that snakes along a pocket park; and the 8-foot-tall "Culmination," by Sean Williams, a cityscape that seems to rise from a quarry. "Culmination" honors the stone carvers who immigrated to Barre, Williams told Seven Days when his piece was installed last fall.

Continuing down North Main, we stopped to admire the rude-faced gargoyles on either end of a metal coil. Another work by Miller, it's one of several granite-anchored bike racks scattered around downtown.

At the intersection with South Main and Washington streets, a massive monument titled "Youth Triumphant" dominates one end of City Hall Park. Designed by noted New York artist C. Paul Jennewein and installed in 1924, the work both commemorates armed forces in World War I and makes a plea for world peace. The young warrior's kneeling posture has a different resonance these days.

The plaza surrounding "Youth Triumphant" offers another attraction: an odd acoustic phenomenon extolled by many a travel writer. When two people sit at either end of the semicircular granite bench and speak at a low volume, they can hear each other perfectly, 20 feet apart. We verified that it works, even above the din of street construction.

The final sculpture on our stroll was a memorial to poet Robert Burns, erected by Scottish immigrants to Barre in 1899. Sited on the sloping lawn of the Vermont History Center and soaring 22 feet from the base, the monument is a stunning accomplishment in granite carving. Particularly impressive are the high-relief panels on the pedestal that feature delicate text and scenes from Burns' poems. Their carver, Elia Corti, was mortally wounded in 1903 following an altercation between anarchists and socialists outside what's now called the Old Labor Hall.

After marveling at all this statuary and history, a shopping break was in order. Our first stop was an antique store called Grakles, where a number of black birds (not real) perch here and there. Owner Marsha Kincheloe, who gamely answered questions from behind her face mask, told us she's been in business for 18 years and was able to reopen at the end of April — earlier than other retail stores — because of her "light manufacturing." She manufactures — that is, sews — colorful pot holders, aprons, bags and the like, examples of which are clustered on racks near the front door.

The rest of Kincheloe's inventory, from 60 consignors, is neatly but tightly arranged. Social distancing hasn't been a problem, because "only a couple people at a time" have entered the store, she said. "Business is only about 30 percent of what it was this time last year," Kincheloe added. But she didn't seem too worried.

A sole proprietor with no employees, Kincheloe noted that people are still downsizing and casting off extra stuff, while other people still like to buy old things. Proving that point, we relieved her of an antique rolling pin, some books and a tiny wooden tiger.

The smell of leather lured us into Boisvert's Shoe Repair, which not only fixes footwear but also sells leather goods, from briefcases to motorcycle jackets. A fluffy little moppet greeted us with pretend-scary barks before deciding to leap around excitedly instead.

"She's been cooped up too long," Megan Boisvert said of the pooch, Ella, apologizing as she emerged from the back. "Haven't we all?" we said.

Boisvert is a third-generation cobbler in the shop that her grandfather, Ernest Boisvert, founded in 1950. There were five cobblers in Barre at that time, she said; now she believes Boisvert's is one of three in the whole state. We admired a spangled leather jacket, purchased a tomato-red wallet and gave Ella an extra pat before heading out. It was time for lunch.

Three biker dudes were just finishing theirs at the Quarry Kitchen + Spirits as we passed by the outside tables. "Hey, did you guys know about the leather shop around the corner?" we ventured. They did not. "You might want to check it out." To our delight, they did.

We had decided on takeout from Rickie's Indian Restaurant in South Barre. Though the Punjabi food is authentic and rave-worthy, "restaurant" is a bit misleading. Rickie's occupies the back of a Shell gas-station convenience store, alongside conventional deli offerings.

We packed our mango chicken and butter chicken into the back seat and headed to Hope Cemetery. tweet this

Gary and Kelly Singh and their adult children operate the place — Rickie is the youngest. Kelly is the primary cook, as we learned when asking a daughter about ghee in one of the dishes. "I don't know, ask my mom," she said, pointing to a lovely woman at the cash register.

After a short wait, we packed our mango chicken and butter chicken into the back seat and headed to Hope Cemetery. The route took us back through downtown Barre, where the Delicate Decadence cake boutique issued a siren song. We pulled over, as one will often do for chocolate.

Finally, with a bag of fudgy decadence and Indian takeout, we entered the cemetery drive, which is flanked by two classical sculptures by Carlo Abate, and found a place to plop down. Picnicking under a lilac tree, we gazed at row after row of granite sculptures and tried to imagine the lives of immigrant artists in Vermont more than a century ago. Here in the New World they met their deaths, often from silicosis.

A veritable outdoor museum, Hope covers 65 acres and holds more than 10,000 gravestones. They have the pale gray of granite in common, but their final-resting-place styles vary dramatically: stolid rectangles with elegantly chiseled names, a miniature biplane, a grand mausoleum with a facsimile Pietà, a soccer ball, a race car, a celestial choir's worth of angels.

Before heading home, we prowled the winding lanes of the cemetery, reading scores of Italian surnames out loud. One kept appearing: Calcagni. As we wondered why all the Calcagnis weren't buried in one place, we came upon a couple placing geraniums at a tombstone marked ... Calcagni. We stopped to inquire about the name.

The gentleman pronounced it Calcanny; his wife said it was her aunt's family. The gentleman asked where we were from; he seemed astonished that visitors with no dead kin here would drive all the way from Burlington. His wife explained that no one else brought flowers to this grave, so she did. "That's very kind of you," we said.

"Thank you for stopping," she called as we drove slowly away. "You take care."

When they reopen to the public, we also recommend the following:

The original print version of this article was headlined "Gardens of Stone | A day trip close to home: Barre"