On several Vermonting excursions this summer, I sought places that offer a mix of recreation with art or history. On this quest, and by this measure, I struck gold at Marsh-Billings-Rockefeller National Historical Park in Woodstock.

The 550-acre park encompasses one of the oldest planned and scientifically managed forests in the nation, possibly the oldest, according to the National Park Service. The site is a living laboratory of land stewardship and environmental conservation characterized by forest plantations that date back to 1880. The only national historic park in Vermont, Marsh-Billings-Rockefeller is linked by and named for three families who lived in a brick mansion at the Elm Street property at the base of Mount Tom, over the course of two centuries.

In 1992, owners Laurance and Mary French Rockefeller granted the house and property to the park service — carrying on a Rockefeller family tradition of donating land for the creation and expansion of national parks. The Woodstock park, which includes the mansion and its objects and artwork, opened to the public in 1998.

"This one had to have felt extremely personal," Marsh-Billings-Rockefeller curator Ryan Polk said.

The park features a 20-mile network of trails that winds through forests established in the late 19th and early 20th centuries by Frederick H. Billings. A Vermonter raised in Woodstock, Billings was a lawyer, railroad magnate and the grandfather of Mary French Rockefeller. He put into practice ideas set forth by George Perkins Marsh in his influential 1864 book Man and Nature. Born in 1801, Marsh grew up on the land that, 200 years later, would become a national park that bears his name.

Yet the park is not intended as a place of "hero worship where Marsh, Billings and Rockefeller are venerated," Polk said. "It's more about learning what these people did as models."

Polk noted that visitors to the park can see that "the conservation work and the preservation work they were doing was local. If everybody did their part locally, you would have a global movement — a reconnection to the land and a more sustainable future."

Last month, I visited the park twice in four days — zipping down from Burlington in about 90 minutes. I couldn't get enough on the initial outing — time ran out on us in the sculpture garden — so I went back for more.

On the first trip, with my daughter, we stopped for lunch in Barnard, buying sandwiches at the Barnard General Store. We ate at a picnic table at Silver Lake State Park, directly across the street from the store. I love that park for its location in the center of town and because Silver Lake is the best place to stop for a swim — just pull over and jump in — on a summer road trip.

But this day, we ate our sandwiches and got back in the car, continuing south on Route 12 about 10 miles to Woodstock.

Though a Vermont-style "billboard" — small and discreet — points the way to the park, more substantial guideposts are the trees: a row of tall Norway spruce that signals one's arrival at Marsh-Billings-Rockefeller.

A "curtain" of green, to borrow the word of William Keeton, professor of forest ecology and forestry at the University of Vermont, the majestic evergreens welcome visitors to the park and obscure the mansion and surrounding grounds. 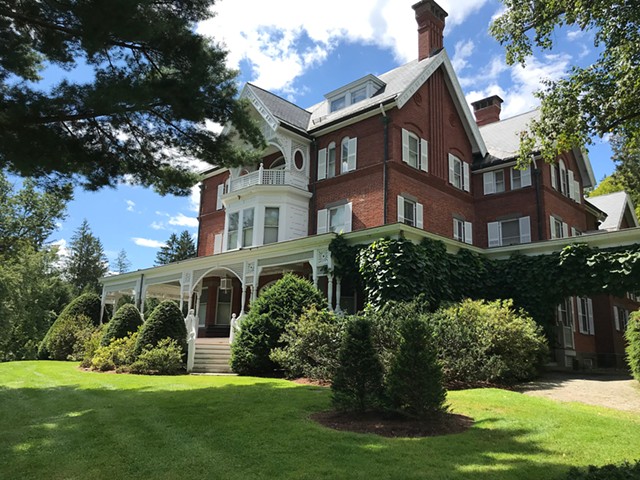 The mansion, which houses a collection of Hudson River School paintings, is closed to visitors this season due to the COVID-19 pandemic. But the walking trails and garden are free and open year-round. A map posted near the visitor center and available online marks the property by its tree plantations: European larch, 1887; white pine, 1911; mixed, 1896; Scots pine, 1930s.

We walked for a bit on a carriage road through conifer and hardwood forests, then backtracked downhill and wandered to the flower garden behind the mansion. The formal gardens were in peak bloom, composed of a lovely array of daisies, black-eyed Susans, tiger lilies, bee balm and lavender mist. A marble water mountain, fed by a mountain spring, stands at the center of the space.

Past the flower garden in a grass alleyway is a sculpture exhibit called "Hudson on the Garden." The bronze sculptures, made by Greg Wyatt, depict three renowned Hudson River School landscape artists — Albert Bierstadt, Thomas Moran and Sanford Robinson Gifford — whose paintings and prints hang in the mansion. 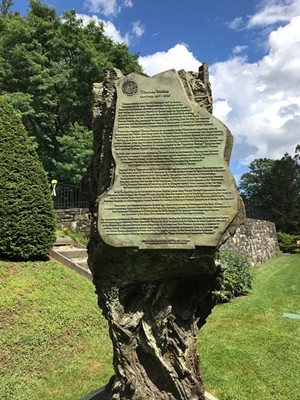 The sculptures made by Wyatt, a New York City-based artist and teacher, will be on view at Marsh-Billings-Rockefeller through October 2021. On the back of each sculpture, he crafted in bronze the text of the National Gallery of Art biography of his subject.

"It's very interactive, very tactile," Wyatt said in a telephone conversation. "I like art in the public square. You don't have the museum security rules. You can experience the sculpture the way sculpture for artists is created."

He noted the significance of the sculptures' placement in a national park; they were previously on display at Yellowstone National Park.

"A lot of people are surprised and thrilled to learn that the Hudson River School of painting made a very significant contribution to the founding of the National Park Service," Wyatt said.

It's an "honor," Wyatt added, to be associated with the Woodstock park.

"Each of the three owners [of Marsh-Billings-Rockefeller] made beautiful contributions to the arts and to the preservation of some of the finest things in America," he said.

The forest itself is one of those very fine things. Following that first trip, I returned for a longer walk and a closer look at the woods.

This time, I walked to the top of Mount Tom, a gentle summit of about 1,350 feet. I started on a path called Upper Meadow Road — which passes the garden — and followed it to the Mountain Road, one of the carriage roads Billings built in the 1870s. The last leg of the walk is along Mount Tom Road. Most of the four-mile round-trip hike is through the woods. But there's also open meadow, freshly mowed the day I was there, and a side trail to a mountain pond called the Pogue.

The top offers a marvelous view of the village of Woodstock, with its white clapboard houses and church steeples. On the walk down, I took a side trail through a stand of larch trees.

A couple of days later, I spoke on the phone with Keeton, the UVM professor. He and his students have been studying the trees and forest structure at Marsh-Billings-Rockefeller for 20 years. Keeton was immediately intrigued by the Woodstock site because it's one of the first sites in North America, if not the first, to be deliberately reforested, he said.

"The combination of decades of tinkering and experimenting with reforestation, alongside natural reforestation" makes the site "a microcosm" for recovery processes that are occurring across the region, Keeton said.

"The most exciting aspect of the research [is]: These secondary forests that we're seeing across New England have the potential to recover the same amount of carbon storage, or close to the amount, that they did in precolonial times," Keeton said.

A noteworthy aspect of the planned forest at Marsh-Billings-Rockefeller is that the plantings were initiated when the United States had "almost no knowledge of how to do forest plantings," he said.

"All the notions are based on European models of forestry," Keeton continued. "That's why the earliest plantations are almost entirely exotic species. They weren't really thinking about native species or biodiversity."

Plantings that occurred under the Rockefellers would include native species, he noted.

Keeton's favorite tree at the park, whose location he wouldn't reveal, is a hemlock some 450 years old — one of the oldest trees in Vermont. It's characterized by "big, gnarly upper limbs that take an abrupt right turn skyward," he said.

With a trunk bigger than a meter in diameter, the hemlock is among the "legacy trees" scattered throughout the park, Keeton explained. These trees predate clearing and are remnants of the original, old-growth forest that existed there.

Though the park itself — with its natural beauty, fascinating history and bronze sculptures — is reason enough to return to Marsh-Billings-Rockefeller, I've got to go back to do two things: look for the secret hemlock tree and see the larch trees turn gold in the fall.