Vermonting: Burton Island in the Sun and Pup-Friendly Fun in St. Albans 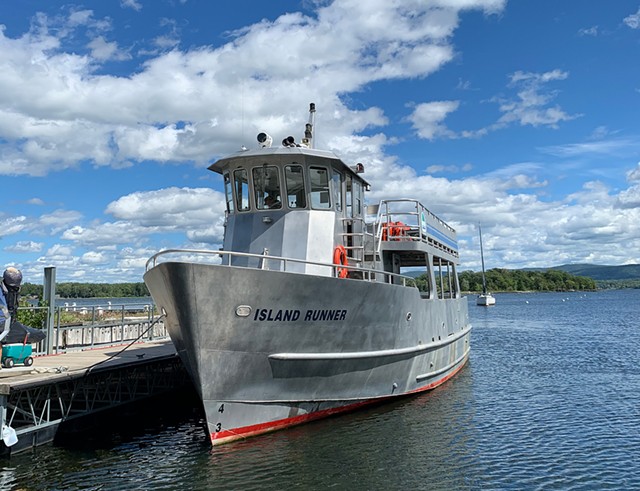 One way or another, pandemic or not, I've been determined to ride a cute ferry to a cool island this summer. You see, every summer for the past several years, my girlfriend and I and a core group of friends have vacationed together on Block Island. Thirteen miles off the southern coast of my native Rhode Island — and much smaller and usually less crowded than Nantucket or Martha's Vineyard — the "Bermuda of the North" is perhaps my favorite place on the planet.

My memories of and affection for the island tend to be triggered most acutely when I board the ferry at Point Judith. I might be at my giddiest when leaning on the railing of the Block Island or Anna C, sipping a Bloody Mary from a plastic cup and gazing out at the sun-dazzled sound.

The pandemic torpedoed those summer vacation plans, of course. While that's the least significant casualty of the coronavirus, it doesn't mean I haven't dreamt of bodysurfing at Mansion Beach, mudslides at the Oar and that lumbering ferry as it pulls into Old Harbor.

So I couldn't help but grin as the Island Runner pulled into the harbor at Kill Kare State Park last Friday morning. That's the cute-as-a-button ferry that whisks passengers to and from Burton Island State Park in Lake Champlain. With just days to spare before the end of summer, I was going to get my ferry ride to a cool little island after all.

My girlfriend was stuck at work, so my traveling companion for the day was our dog, Mookie Petts. (Yes, he's named for the former Boston Red Sox outfielder Mookie Betts, since traded to the Los Angeles Dodgers. Sore subject.) Over my 30-odd years living in Vermont, I'd never checked out Burton Island, and I was eager to go.

Since I was bringing Mookie, I decided to craft this St. Albans-area Vermonting around dog-friendly destinations. That meant skipping certain shops and restaurants — catch you next time, Eloquent Page bookshop and Frozen Ogre toy store. Overall, though, it was fairly easy to accommodate my furry friend.

If it hadn't been, we could have spent the entire day or more on Burton Island. If I can ever get Mookie on a ferry again, we just might. 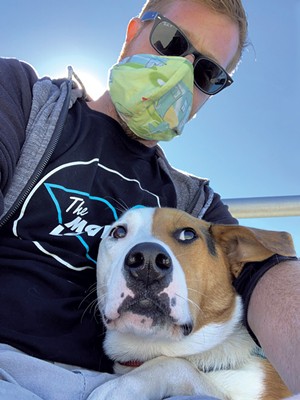 Rattled by the rumble of the ferry engine, Mookie — who, at a year old, is basically a 60-pound puppy — spent the entire 10-minute sail curled in a ball and shaking on my lap. While that made for a less-than-comfortable ride for me, Mook's aversion to the noise seemed to charm the two women on the other end of the open-air top deck. The only other passengers up top, they wore face masks for the duration of the trip.

Upon reaching Burton Island, we disembarked quickly, much to Mook's relief. Some passengers lugged coolers, tents and tubs of gear onto complimentary carts to mule to campsites, but we, as unencumbered daytrippers, simply strolled over to the park office for a map. A friendly staffer gave us a brief orientation, explaining that it would take two to two and a half hours to circumnavigate the 253-acre island. Aiming to catch the 1:30 p.m. boat back to the mainland, we had about three hours, a comfortable buffer.

Mookie and I headed north along a wide multiuse trail that runs through the campground section of the park. Most of the lean-to and tent sites were empty, though I was later told many would be full by the end of the day, the start of the holiday weekend. Still, I noted a pleasant hum of activity as staffers turned over campsites, and the even more pleasant aroma of breakfast campfires. 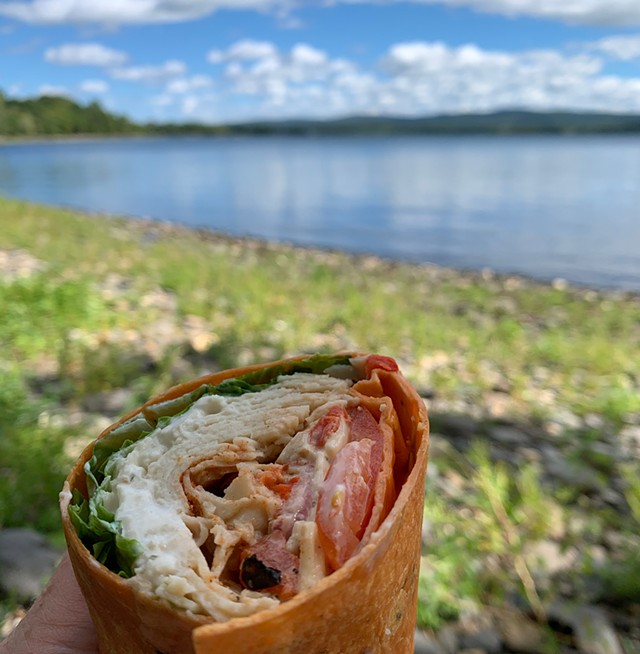 From there we picked up the North Shore Trail, one of the island's four pedestrian nature paths. As we trekked farther, campsite chatter was replaced by the sound of waves lapping against the rocky shoreline just feet away. There are numerous spots to duck off the trail and onto quiet beaches with stunning views of North Hero and, in the distance, New York State.

We stopped briefly at Eagle Bay, a secluded crescent beach that could have been our ultimate destination for the day if we'd had more time — and if the temps had edged a few more degrees above the low 70s. Instead, we pressed on to the West Shore Trail, which hugs the shoreline until it reaches the spectacularly scenic Southern Tip and joins the Southern Tip Trail.

That path leads to the island's four paddler campsites, which are part of the Lake Champlain Paddlers' Trail, a lake-wide network of sites reserved for canoeists and kayakers. More private and rustic than the lean-to area, these are my choice for lodging if we return for a longer stay — provided Capt. Mookie doesn't capsize our canoe. 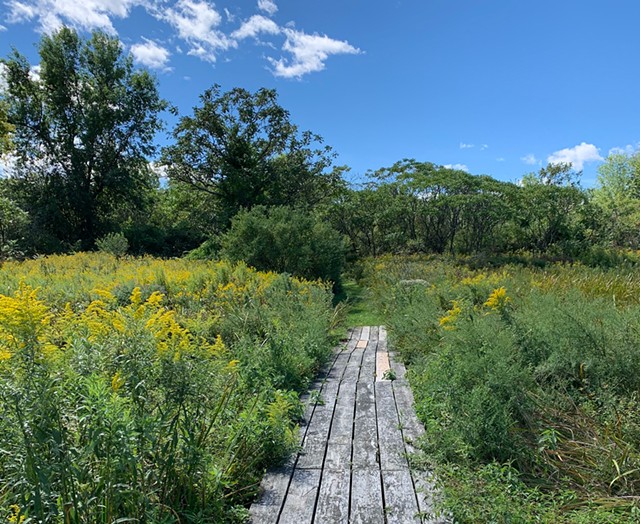 Next, we made our way to the Island Farm Nature Trail, a winding remnant of the island's agricultural heyday in the early 1900s. With its low vegetation and abundance of wildflowers, this section of Burton Island reminded me of Rodman's Hollow, a nature trail on Block Island. A deserted beach just off-trail presented an ace lakeside spot for lunch — a delicious Cajun chicken wrap I'd picked up that morning at Tatro's Soup & Sandwich in downtown St. Albans.

We wrapped up our hike with about 45 minutes to spare. To kill time, we poked around the park's off-leash area and then wandered by the marina. There, Mookie met a new friend: a very lifelike canine statue standing sentinel over rows of empty boat slips. The pooch was so realistic — down to a feathery tail that billowed in the breeze — that Mookie introduced himself by sniffing its posterior and was rather confused not to receive a sniff in return.

I soon learned the statue represented a coyote, one of several strategically placed around the island in an attempt to deter passing Canadian geese from, as a staffer told me, "shitting all over the place."

We easily caught the 1:30 boat and landed at Kill Kare, where a throng of Labor Day campers awaited. One of my favorite pastimes is driving Vermont's lakeside roads. So, rather than head directly back to St. Albans, we took a spin up Route 36 along Maquam Bay, past stately year-round homes and cozy summer lake houses.

Along the way, we dropped in on a yard sale, where the homeowners wanted a bit more money for a kitschy drawing of William Shatner and Leonard Nimoy as their "Star Trek" characters than I was willing to pay. They did, however, offer a few tips for the remainder of our trip: Stroll the gardens in Taylor Park, grab a beer at 14th Star Brewing and have dinner at Twiggs American Gastropub.

First we made a pit stop at Groennfell Meadery to chat up head brewer Rick Klein, aka Ricky the Meadmaker. The meadery is only open to the public on Saturdays, when you can buy cases of mead at half price during the pandemic.

Then we parked on Main Street and ambled through Taylor Park, the resplendent centerpiece of St. Albans' ongoing downtown revitalization. Small, colorful flower gardens and a recently restored 1887 fountain known locally as "the Ladies" anchor the vibrant and eclectic main drag.

Just a couple of blocks away, we found veteran-owned 14th Star in a strip mall along Main Street. I thought I'd given up drinking in parking lots after college, but the pandemic has made everyone reevaluate things.

14th Star boasts a large and welcoming beer garden in its spacious lot. More importantly, it sells a fine array of beers. While some are brewed in more conventional styles, such as the pitch-perfect amber Valor Ale, others exhibit outside-the-mash-tun thinking, such as Game Changer, an ale brewed with orange zest and a Gatorade-like orange sports drink. With the hint of fall in the air, I opted for a dry Irish stout, relishing the smooth balance of malty sweetness and hop bitterness.

Mookie gladly lapped up a bowl of water and accepted enthusiastic scratches from basically everyone who walked past our table. 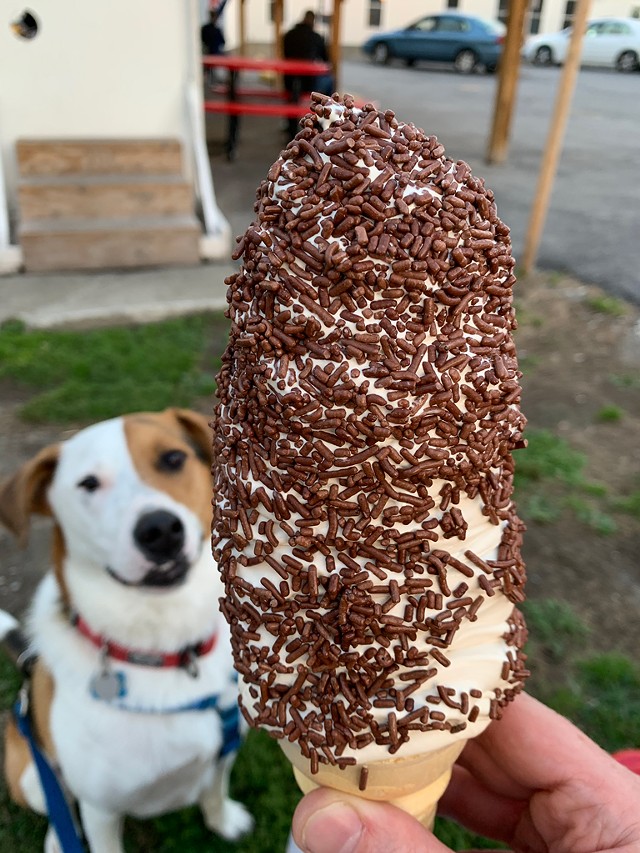 For dinner, we snagged a sidewalk table at Twiggs, where the bustling outdoor "patio" now occupies roughly half of the block opposite Taylor Park. It afforded excellent people watching, both of our fellow diners and of those enjoying the park — such as the fella practicing juggling pins on the green. The juicy bacon-and-blue-cheese burger wasn't bad, either. Mookie enjoyed yet another bowl of water, several of my fries and more adoring attention from passersby.

For dessert, there was really only one choice: Hoss's Dogg House, the snack bar just off the Rail City's main drag on Lake Street. Still full from dinner, I ordered what I thought was a sensible small maple creemee with chocolate sprinkles. In hindsight, I should have taken the hint from the teenager behind the counter when she tried to clarify my order: "You said a baby, right?"

I don't know if she was attempting to goad me into ordering the "Hoss" — which, at one size above a "large," I could only assume resembled a bazooka. But the "small" she handed me through the window was about as big as her forearm. "Enjoy," she said with a smirk. And I did.

The original print version of this article was headlined "Dog Day | An island in the sun and pup-friendly fun in St. Albans"