Vermonting: Baking and Books, Turkish Treats and Taxidermy in the Upper Valley 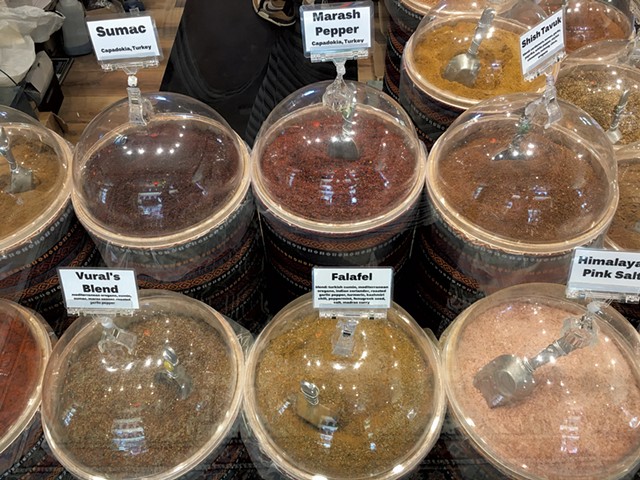 The Upper Valley is unique for multiple reasons, and one is that it so easily straddles Vermont and New Hampshire. Perhaps nowhere else in the Green Mountain State do so many residents identify more with their geographical niche than with the insular identity of "Vermonter."

Rob Gurwitt, who lives in Norwich, has been writing Monday-through-Friday newsletters called Daybreak Upper Valley for and about the area for 17 months. "At some point after arriving here," he told Seven Days in an email, "I began to think of the Upper Valley as a single sprawling 'city' with different neighborhoods. People cross state lines every day to go to some 'neighborhood' or other that has what they want."

Though the designation Upper Valley extends farther in all directions, I think primarily of the cluster of Norwich and White River Junction, Vt., and Hanover and Lebanon, N.H., as the "UV." As Gurwitt pointed out, many Vermonters work at or otherwise benefit from major institutions across the border, including Dartmouth College and the Dartmouth-Hitchcock medical center, the Lebanon Opera House, AVA Gallery and Art Center, and a couple of shopping malls. There are even interstate high schools. The area's daily newspaper, the Valley News, covers both states and maintains physical offices in Lebanon and a mailing address in White River Junction.

Since this series is called Vermonting, my travel companion and I opted to stay on the Green Mountain side of the Connecticut River on our recent Saturday excursion. Our destinations were Norwich, White River Junction and Quechee. The trip turned out to involve a little more shopping and less communing with nature than we had planned.

Our first stop was King Arthur Baking in Norwich, where we figured a croissant and a cup of coffee would reward our 90-minute drive from Burlington. King Arthur's recently reopened HQ is akin to the Holy Grail for home bakers, and, as I had jumped on the sourdough bandwagon during the lockdown, my interest in flour could be described as peak devotional. (The company's meteoric national rise was the subject of a June 24 cover story in this paper.) 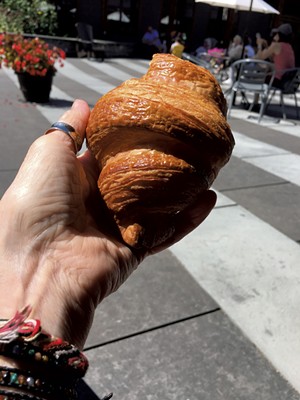 The store was of less interest to my companion — who called it, punningly, a "white-bread experience" — but both of us procured a couple of kitchen items. I snagged a bag of Italian-style flour for a friend who makes his own pasta.

Our next stop was downtown Norwich, specifically the Norwich Bookstore, which was celebrating its 26th anniversary. Since big parties are countermanded by the pandemic, owners Liza Bernard and Penny McConnel offered a 20-percent-off sale instead. Supporting local bookstores is always a priority, so I headed there to pick up a few books I'd ordered online.

The store is still closed for in-person shopping, but a brown paper bag, stapled at the top and bearing my name, sat on a table just outside the back door. A masked couple milled about, ostensibly waiting for their called-in order. On the adjacent tree-lined green, children scampered over plastic playground equipment. If we hadn't been on a mission, I would have plopped down in the shade to examine my books.

One of them, by New York Times sportswriter Karen Crouse, is titled simply Norwich. It was the subtitle that piqued my interest: One Tiny Vermont Town's Secret to Happiness and Excellence. Turns out that it slightly oversells what is actually an ode to parenting — specifically, parenting athletic kids.

"In Norwich, kids aren't cut from teams. They don't specialize in a single sport, and they even root for their rivals," the book's cover copy gushes. "What's more, their hands-off parents encourage them to simply enjoy themselves. Yet this village of roughly three thousand residents has won three Olympic medals and sent an athlete to almost every Winter Olympics for the past thirty years."

Gee. Even if the assertion that local adults are uniformly well-balanced seems suspect, there's no denying those stats. None of this athletic dominance was evident in lovely, well-kept Norwich, a quintessential New England village. But one likes a town that doesn't boast. 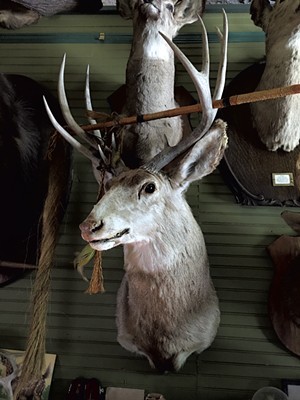 We were soon distracted by an arty little clothing/jewelry/gift boutique adjacent to the bookstore: ZuZu's. Co-owner Eileen McHugh was on hand to assist us with our shopping desires. Both of us wanted to stock up on birthday presents, and after nearly five months of pandemic-induced anxiety, it was a pleasure to browse in leisure and look at pretty things. The obligatory hand sanitizer even smelled good.

On to White River Junction, one of my favorite Vermont towns. My companion hadn't been there in many years, so I was delighted to show her how much it had changed. For starters, the tiny burg of 2,286 is now arty AF, home to the Center for Cartoon Studies, three theater companies — Northern Stage, JAG Productions and We the People Theatre — a couple of art galleries, several design firms, a printmaking studio, and more. 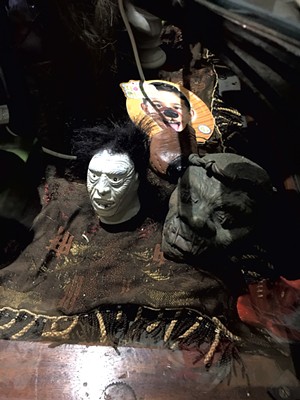 In the "more" category is the inimitable Main Street Museum. Currently closed for renovations, it's due to reopen in November. (Don't believe the website, which is perpetually outdated.) But I had called founder-proprietor David Fairbanks Ford in advance to see if he'd allow us a little tour. He said yes.

As he'd warned, the front of the quirky, cabinet-of-curiosities-style venue was under considerable construction. Ford pointed out some of his own handiwork: an elaborate frame for a doorway, an exhibition pedestal, buffed flooring. In more congenial times, the space hosts parties, musical performances and film nights.

My companion still got a taste of Ford's distinctive acquisitions, and his taxonomies thereof. Jumbled in the back we found stuffed creatures, bizarre assortments of bones, pop culture items, creepy toys and treasures that less discerning eyes might have mistaken for trash. It's a collection that U.S. Rep. Peter Welch (D-Vt.) once called "White River Junction's answer to the Library of Congress." 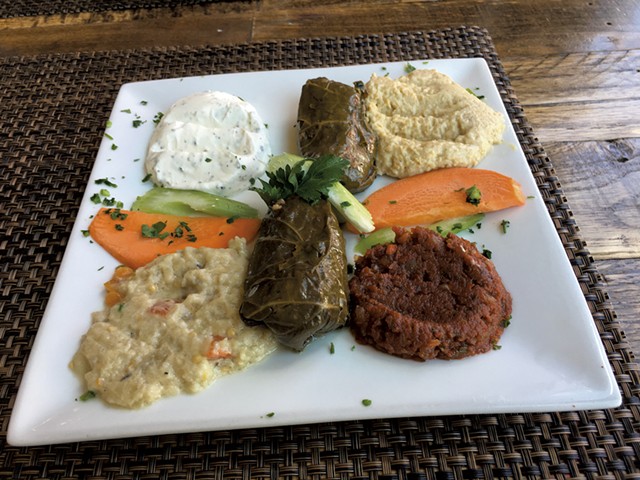 Contemplating the insatiable human desire to collect things made us want to eat lunch, so we ambled over to Tuckerbox. (WRJ is the ne plus ultra in walkability.) The Turkish-Mediterranean restaurant serves both outdoors and in, with enough room to socially distance the diners. The mezze platter called my name, just as it always does at Tuckerbox's sister restaurant in Burlington, Istanbul Kebab House. My friend ordered a Turkish pastirma and salad. 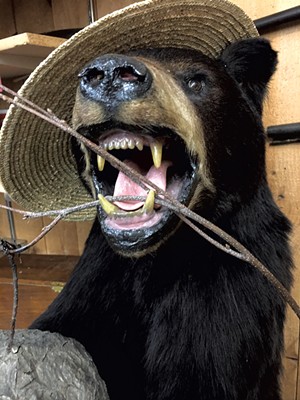 This sustenance fueled our stroll on the rectangle of small shops that constitutes much of downtown. We stopped at Scavenger Gallery to say hi to owner and jewelry designer Stacy Hopkins and gawk at her latest creations. Inspired by the natural world, Hopkins makes rings, bangles, necklaces and more from various metals in the shapes of beetles, raptor talons, tiny critter skeletons and botanical elements. Her interest isn't just aesthetic; sales of Hopkins' Endangered Collection, for example, benefit conservation efforts in a fragile ecosystem in Costa Rica.

Our urban circumambulation also brought us to Revolution, a shop that sells mostly hip, upcycled clothing, and to the import shop Little Istanbul, where colorful bins of spices such as sumac, Marash pepper and "Vural's Blend" tickled our noses. We passed the Village at White River Junction, a new five-story, cutting-edge eldercare facility next door to Northern Stage. "If something like that exists in downtown Burlington when I'm 90, I would move in," I declared.

We ended up back at Tuckerbox, got a couple of iced lattes and baklava for the road, and headed to Quechee.

Our original to-do list included visits to the raptors and the forest canopy walk at the Vermont Institute of Natural Science; to Simon Pearce, the glassmaking studio, shop and restaurant complex on the beautiful Ottauquechee River; and to the dramatic, 165-foot-deep Quechee Gorge. At that point in the day, though, both of us agreed our itinerary had been too ambitious; we would save these destinations for another trip.

We settled for a spin around the capacious Vermont Antique Mall, just a hop down Route 4 from the gorge. But, after all the things we'd seen and purchased, nothing from those collections of yesteryear spoke to us.

Well, one snarly bear head did seem to be saying something. Maybe he would be happier in the Main Street Museum?

The original print version of this article was headlined "The 'Upper' Hand | Getting down with baking and books, Turkish treats and taxidermy"