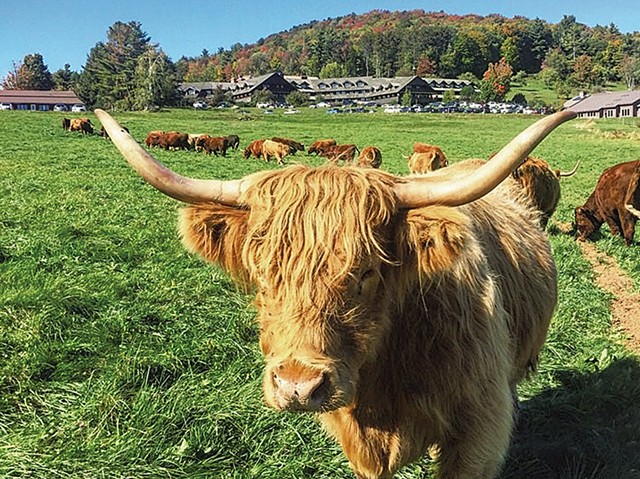 The old adage that Vermont has more cows than people is not true: Humans outnumber cattle in the Green Mountain State by about 2.5 to 1. But if you happen to be in a pasture at Trapp Family Lodge in Stowe, the cows prevail.

I was part of a human herd of two dozen people who trekked through the cow pasture on a glorious morning in mid-October. We ogled about 55 Scottish Highland cattle that generously shared their home turf with us, high in the hills, during a Meet the Cows tour at the mountain resort.

Even as Vermont has opened up from the pandemic shutdown, Gov. Phil Scott still encourages residents to stay home as much as possible. And so now is a good time to explore our home state. Its diminutive size makes a multitude of short trips accessible, whether for a few hours, an overnight or a longer getaway.

This series presents curated excursions in every corner of Vermont, based on the experiences of Seven Days reporters. The idea is to patronize the state's restaurants, retailers, attractions and outdoor adventures — after all, we want them to still be there when the pandemic is finally over. Happy traveling, and stay safe.

As goes the song in The Sound of Music — the Hollywood blockbuster that brought fame to the singing von Trapp family, who founded the lodge — the hills are alive.

"I don't think you can go too many places, walk out in a field of 1,200-pound cows and a bull, and have a tour," observed tour leader Chris "Poach" Pocher.

The cows at Trapp Family Lodge are a good-looking and well-mannered bunch. Like the people who live in Stowe — a Lamoille County resort town where 65 percent of the residential properties are second homes, according to the town assessor — the Scottish Highlands are accustomed to visitors. A shaggy calf enjoying a bottle-fed breakfast took a break to snuggle up to two little boys on the tour. A 1,000-pounder thoughtfully waited until I moved out of her path before running down the lane to water. (Thanks for the heads-up, Poach.)

The cow tour was my first stop on a day trip to Stowe, an excursion that took place as foliage season came to a mild and sunny end and before the start of ski season in a town that boasts an alpine resort on Vermont's tallest peak.

Still, there were visitors aplenty on this autumn day. The Stowe Recreation Path was abuzz with youngsters on bicycles, couples taking leisurely strolls and a cyclist who pedaled past me with a pipe in his mouth. (No, he was not wearing a face covering.)

But all the guests on the fresh-air cow tour at Trapp Family Lodge wore them. Poach went maskless because he had a lot of talking to do, but he kept a safe distance from his charges and sometimes stood closer to cows than people.

We stayed mostly clustered in our pods in the pasture while sidestepping mud and manure, keeping an admiring eye on the animals and watching the morning mist burn off the valley below the Worcester Range.

According to Poach, the von Trapps have been raising Scottish Highland cattle since 1963, decades before grass-raised beef became a more common practice in Vermont. 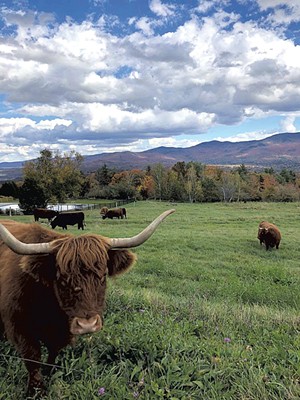 That sounded like a pretty good prescription for the rest of my day in Stowe, though I wouldn't be sleeping there and I had no interest in leading the cows' life to its limit: ending up as goulash at the resort restaurant.

After bidding auf Wiedersehen to the cows, I walked down the road to a field of sheep munching intently on a late-morning snack. Taking a cue from the grazers, I continued downhill to the lodge's Kaffeehaus, a bakery and deli, to procure a munchie of my own.

"It's a pretty good life for a cow." Chris "Poach" Pocher tweet this

I chose a slice of Linzer torte, a delicious nod to the von Trapps' Austrian heritage. The pastry, dry and crumbly, held raspberry preserves and almonds; the crust was dusted with powdered sugar. I found a picnic table outside and basked in the sunshine with the torte and a cup of coffee.

Sated, I took a short stroll on the 2,500-acre property, whose attractions include a network of cross-country ski trails and the von Trapp Brewing Bierhall Restaurant, which specializes in European lagers. Then it was time for a drive downhill to the Helen Day Art Center in the heart of town.

The black-and-white photographs range in subject matter from the avant-garde art scene of New York City in the 1980s and '90s to the "culture wars" of a similar era to current images of Vermont farm animals and the racetrack at Saratoga Springs, N.Y.

I was so taken by the exhibit that I phoned Killacky to talk with him about the photographs. His association with McAdams dates back to the 1980s, when he attended shows at P.S.122, a groundbreaking performance space in New York City. McAdams was there photographing the performers, Killacky said. He also saw her on the streets of the city, shooting events of ACT UP, the AIDS activist group, and other protests.

"What's interesting to me about Dona [is], she's not a detached journalist at all," Killacky told me. "She's embedded, in the middle of the street, taking the pictures."

I highly recommend the exhibit, both for people who remember the protests and performers of this era and for those who will discover something new. I was particularly struck by a 1991 image of Allen Ginsberg reading poetry at P.S.122.

"It was delicious to really spend time in someone's archives and work with her to craft a current-day story of her artistic practice," Killacky said.

But if I were to live purely the good life that day in Stowe, like the high-altitude cows, I couldn't sink too deeply into images of culture wars that seem never to end. So I left the gallery for food and beer.

I decided to walk along the recreation path, which parallels the Mountain Road and crosses the West Branch of the Little River. The full path is 5.3 miles, from the center of town to Topnotch Resort. I strolled about two and a half miles to Burt's Irish Pub, a quiet oasis on Luce Hill Road. 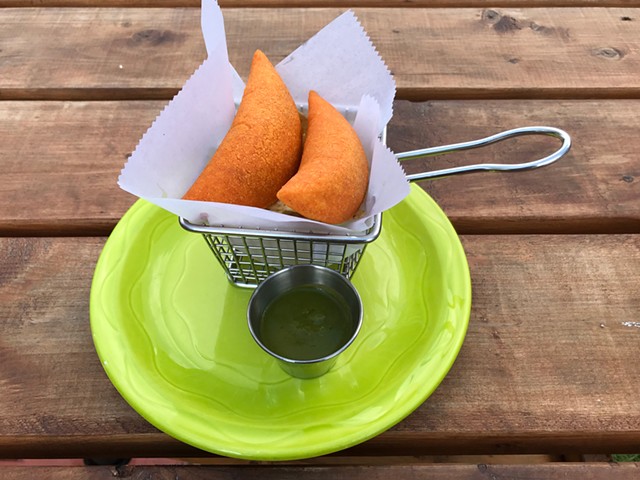 In contrast with popular destinations I passed on the way, including Idletyme Brewing and Piecasso Pizzeria & Lounge, the parking lot at Burt's held just two cars. One was the owner's; the other belonged to a pair of beer salesmen who were on the road together.

The beer guys were leaving as I entered the barroom, a small and cheery space that accommodates 15 patrons during the pandemic, according to owner Janet Martinez.

I ordered a pint of Four Quarters Brewing's Phaze and took my draft into the sunny backyard. I had the picnic table — indeed, the whole place — to myself. I could've played a solo game of cornhole, but after the walk uphill I was pleased to relax with my beer.

Martinez came out on the back deck to chat for a bit. She's owned the business, founded in 1976, for 17 years. Though she kept the bar's name, you won't find corned beef and cabbage at Burt's Irish Pub. Of Colombian descent, Martinez cooks and serves that country's cuisine.

I was rewarded mightily for my rec path hike with a basket of beef empanadas, hand-stuffed and hand-folded by Martinez and her 22-year-old daughter. The wonderfully flavorful empanadas, in a shell of deep-fried masa, are filled with ground beef, scallions, potato, cilantro and seasonings. The chimichurri is housemade.

Because Burt's is off the beaten path, Martinez's clientele is mostly locals who work in bars and restaurants, she said: "It's a ritzy town, and we're a blue-collar bar."

On my way down the hill, after a quick stop at Red Barn Ice Cream for a coffee ice cream cone and a detour through the cool and quiet woods of Cady Hill Forest, I came upon the ritzier side. 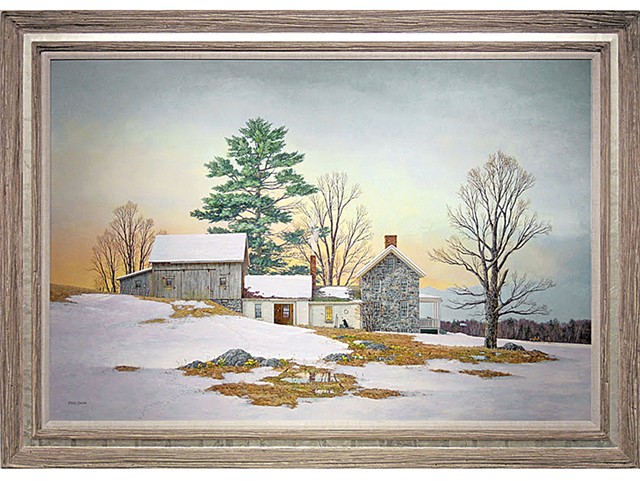 As it started to drizzle, I popped into Robert Paul Galleries, which is marking its 30th year in business. I was barely inside the door when I caught sight of two landscape paintings by Vermont artist Fred Swan, "Spring's Arrival" and "Walking Towards Spring." The iconic images, painted in acrylic on panel, are priced at $28,000 and $25,000, respectively.

From gallery co-owner Gail O'Toole I learned that Swan, a self-taught artist, is a retired math teacher from Barre. He paints with such precision, she said, that the number of clapboards on a painting of a farmhouse matches Swan's real-life model.

After visiting the gallery, I found more art in Lintilhac Park, where I looked for a while at "Stall," a sculpture by Nancy Winship Milliken; it's part of Helen Day's annual outdoor sculpture show "Exposed." I watched as the work's main element, horsehair, rippled in the fall breeze.

Heading home, I pulled off Route 100 at the pretty blue clapboard building that houses Laughing Moon Chocolates. I bought a bag of dark chocolate nonpareils and a milk chocolate CBD lollipop imprinted with a design of cannabis leaves.

If CBD lives up to its cure-all reputation, I'll be feeling good until the cows come home.

For other attractions, visit gostowe.com.

The original print version of this article was headlined "Pre-Ski in Stowe | Cows, art and empanadas in the mountain town"