Vermonting: A Day Trip to Arlington and Manchester 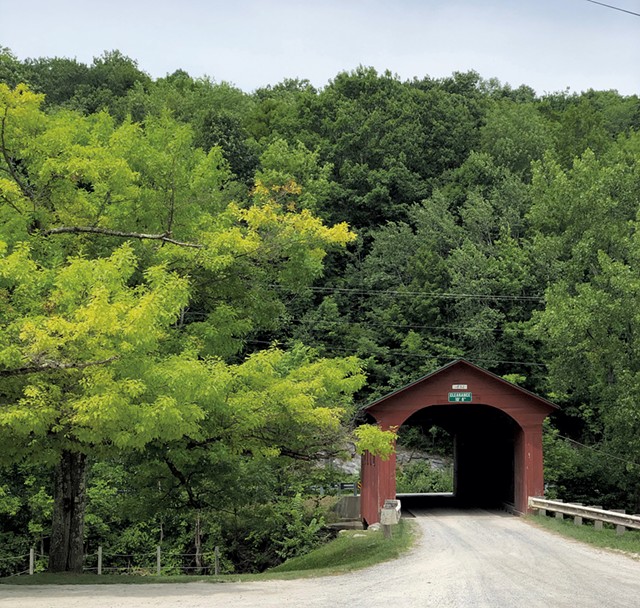 No matter which route you choose, it takes two and a half hours to drive between Burlington and Arlington. It's a trip I've made hundreds of times: as a kid, usually heading west into New York State up Route 22A from the small town in Bennington County where I grew up. Driving south when I was in college, I usually stuck to Route 7.

On a steamy summer day last week, my husband and I headed down Shelburne Road after breakfast, ready to spend the day at my childhood stomping grounds. We packed a cooler for stocking up at our favorite bottle shop and river gear for cooling off in the Battenkill River in the afternoon.

Arlington, a town of about 2,300 people, is historically notable for becoming the first capital of the Vermont Republic in 1777 and, much later, the longtime home of artist Norman Rockwell. When I lived in Brooklyn and described this place to friends, more than one insisted I'd made it up. What kind of place has two covered bridges? You went to public school and only had 35 students in your graduating class? Must be fake.

It's very real, though Arlington is sometimes overshadowed by larger and more bustling nearby towns. Showing people the small-town life of its dirt roads — tucked in the valley between the Green Mountains and the Taconic Range — always reminds me of how lucky I was to grow up there.

Despite my "A-town" pride, we started our day with a few stops in Manchester. There are places to grab a bite to eat in Arlington, but Manchester has Moonwink.

If you google "Burmese restaurants in New England," you'll get three results. The first is in the Boston area. The third, inexplicably, is in Brooklyn. Between the two — and with higher ratings than both — you'll find May and Wes Stannard's counter-service spot.

The Stannards opened Moonwink amid Manchester's outlet shops in July of 2018, bringing May's native Burmese cuisine to the town where Wes grew up. When I stopped in late last year, I was mildly shocked to find something other than burgers and wings in town. It was long past time to go back.

"We were throwing different ideas around and trying to figure out what could work up here," Wes said on my first visit. "The quality of life here is great, but there's no good food — there's no different food."

Burmese cuisine shows the influence of its more heavily represented neighbors in noodle dishes evoking Thai and Yunnan specialties and saucy curries familiar in India and Malaysia, but the combination of flavors and ingredients is entirely its own. Those tangy, slightly spicy flavors shine in traditional dishes such as ong noh kou swel, a creamy, coconut-based stew with chicken and noodles that is topped with hard-boiled egg, cilantro and lime.

We ordered one of those and a rice noodle salad — nan gyi thok — mixed with chicken cooked with shallots, ginger, garlic and turmeric and topped with hard-boiled egg and peanuts. The nan gyi thok came with a crisp cucumber and cabbage salad, which was a welcome relief from both the day's heat and the cumulative spice in both dishes.

Sitting outside at a picnic table, we formulated the rest of our travel plan. I needed something new to read, so the Northshire Bookstore was a must-stop. Because my husband realized he'd forgotten his swimsuit, we'd have to do some outlet shopping, too.

We quickly acquired the trunks and headed to the sprawling bookstore. Founded in 1976, the light-blue building is right in the middle of town, sandwiched between two of Manchester's slightly confusing traffic circles.

Northshire is open for in-person shopping (masks required) and curbside pickup. We browsed the gardening section, the best sellers and Vermont history books before making our way to my favorite part: the sizable food and cookbook section.

I picked up what might be the only M.F.K. Fisher book I didn't already own and talked myself out of at least three cookbooks. They're not really riverside reading material. Checking out, I squealed with delight when I noticed my coworker Melissa Pasanen's newly published The Little Local Vermont Cookbook: Recipes for Classic Dishes prominently displayed. 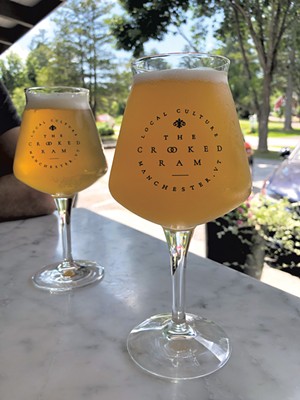 All that browsing made us thirsty, and we needed a few provisions for our afternoon on the Battenkill. My husband discovered the Crooked Ram a couple years ago while searching for good local cider (surprisingly hard to find in southwestern Vermont), and we've been occasional regulars ever since.

The craft beer and wine bar has evolved from the tiny bottle shop it was when it opened in early 2017 into an eating and drinking destination. It carries interesting Vermont beers and ciders and one of the most dialed-in selections of natural and local wines in the state. It's the kind of place where we intend to stop for a quick drink and a four-pack to go, then end up staying for hours and leaving with a car full of booze.

We sat outside with a couple of beers and soon were deep in conversation with owner Peter Campbell and recently hired chef Nevin Taylor. Chef/co-owner Kolton Niesen popped in and out. We shared Vermont beverage intel and our excitement about the state's nascent fermentation scene, touching on other topics such as local resilience networks, cultural appropriation and dismantling capitalism. You know, normal bar talk.

I asked how the pandemic had affected the Ram's business. Campbell said things have been busy, thanks to an influx of city folks — particularly young people — who came to quarantine in the area. So busy, in fact, that the Ram's owners plan to expand. The crew is building out a full kitchen this summer, increasing outdoor seating with a beer garden and growing the food program.

Campbell thinks many of the newcomers to Vermont may stick around, looking for a change of pace and a more pandemic-proof lifestyle. The area was already getting busier, he said, with traffic jams growing during last year's leaf-peeping season. These days, he hears of houses selling before they hit the market.

That influx was visible as we headed to Arlington from the Crooked Ram. Rather than take the quick route down Route 7A, we opted for a scenic loop through the mountains of Rupert and Sandgate, starting with Route 30 to Route 315 West.

Showing people the small-town life always reminds me of how lucky I was to grow up there. tweet this

As we drove through Dorset, the longest line of parked cars I'd ever seen stretched around the popular quarry swimming hole. We spotted only two with Vermont plates. I'm all for people moving to the area and boosting business for places like the Ram — heck, I moved back from New York City, too — but my pandemic-era response to that crowd was: Get me to the middle of nowhere, fast.

As the paved road turned to dirt just past Rupert, and our car started groaning at the climb, we passed the last vehicle we'd see for the next 20 minutes. That was more like it.

While not the most efficient path, the drive — or bike ride, if you're more ambitious — takes you past one vista after another: farms (including Merck Forest & Farmland Center, which is worth a stop), tiny mountain camps, and an endless expanse of trees. We didn't have cell service, and I didn't want it.

Winding down the notch on West Sandgate Road in Sandgate — a smaller version of Smugglers' Notch's narrow pass — I recounted memories of riding these tight switchback turns in a school bus, amazed at the driver's maneuvering skills. I drive a Mini Cooper, and it still seemed sketchy.

As the road opened out of Sandgate into West Arlington, we turned right and headed to the covered bridge. Built in 1852, the red bridge stretches across the Battenkill; a white church stands on the green behind it. Just past that is the house where Rockwell lived during his years in Arlington, using residents as models for his paintings of small-town America. His home is now an inn, and the former studio is still out back.

A prominent trout-fishing river, the Battenkill isn't deep. I'd thought about renting tubes and going for a float, but with the string of hot, dry days we'd had lately, it might have been more of a wade. (Several local companies, on both sides of the Vermont-New York border, rent tubes, kayaks and canoes and facilitate drop-offs along the river.)

Instead, we found a shady spot on the green and swam directly under the bridge. It's usually deep enough there for a little jumping or swinging from a dangling rope, but visitors should check the water level first.

After our swim, we walked down River Road past Rockwell's house. The dirt road runs directly alongside the Battenkill for more than five miles, passing farms, old stone walls, maple syrup lines and dribbling mountain streams. 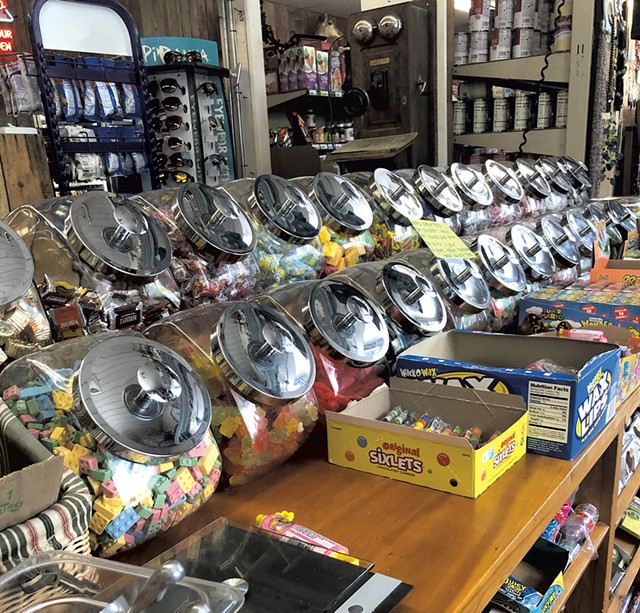 Back at the car and ready for a snack, we made the quick drive to Wayside Country Store. The historic general store's motto has long been "If we don't have it, you don't need it."

This is where my family went when we ran out of eggs, or when we wanted morning coffee and local political talk or summer lunches (always the Vermont Special sandwich, with apples, cheddar, turkey and apple butter). It's where I selected penny candy, carefully weighed to match my allowance. This time, we stocked up on local veggies, hard-to-find hot sauce and spätzle from the Arlington-based Vermont Spätzle Company.

Refueled and ready to spend more time in the river, we parked at a new-to-me spot by the bridge closest to town. The owners of Keelan House, which used to operate as a bed-and-breakfast, generously mow trails for hiking and maintain river access for fishing and swimming; we skipped rocks and shared one of the beers we'd gotten earlier in the day.

Standing thigh-deep in the river with a good Vermont IPA in his hand, my husband said, "There's not much that could stress me out right now." The Battenkill, flowing through the valley where I grew up, has always had that power for me, too. For an afternoon, it stood up to a pandemic.

The original print version of this article was headlined "Burmese, Beer and Battenkill | A day trip to Arlington and Manchester"