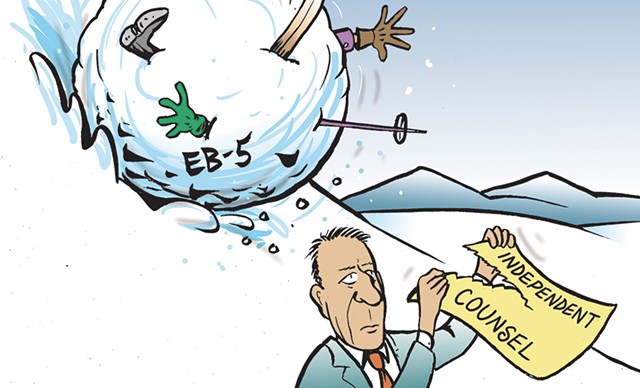 It's too bad Gov. Phil Scott rejected naming an independent lawyer to determine whether state officials acted improperly in the EB-5 scandal.

Leaving the job to Attorney General T.J. Donovan is impractical given Donovan's unavoidable conflict of interest: The AG's first priority, Scott and Donovan acknowledge, is defending state employees whose conduct is being questioned. A full public accounting of the state's role in promoting and regulating the development projects takes a back seat.

Scott's dismissal of an outside probe came after defrauded foreign investors alleged in a lawsuit that members of then-governor Peter Shumlin's administration and other state officials received detailed presentations about the fraud in 2015 — yet allowed investors to pour in an additional $40 million without properly disclosing all that the state knew.

In addition, lawyers for former Jay Peak CEO Bill Stenger, who faces sentencing after admitting to a federal charge, recently alleged that state officials lied to the public, investors and a federal agency about EB-5 issues, according to court filings first reported by VTDigger.org. Those lawyers also disclosed that Shumlin had met privately at his home with Florida businessman Ariel Quiros on New Year's Day in 2015, where Quiros reportedly said the two discussed "all the problems at Jay Peak."

The EB-5 program allows foreigners to become U.S. citizens after investing $500,000 in qualified, job-creating American businesses. Quiros and Stenger raised approximately $450 million for a series of eight projects in the Northeast Kingdom, including a nonexistent biotech plant. In 2016, the feds alleged that the projects were a "Ponzi-like" scheme whereby funds designated for one project were used to finance another. They also alleged that Quiros had siphoned off some of the funds for his personal use.

The lawsuit alleges that state officials knew about the commingling of the funds in 2015 but allowed investors to continue putting money in for political reasons. The last of the eight projects in the Northeast Kingdom was at Burke Mountain. The seventh was AnC Bio, which was supposed to be located in Newport.

"The State's overriding interest was in ensuring that the ski resort at Burke would avoid the fate of Newport, Vermont (which, in 2015, had a hole the size of a city block in its downtown as the result of the Ponzi-scheme), and ensuring that the dozens of Vermont contractors, materialmen, and suppliers would be paid for their contracts building Burke's hotel," the lawsuit says.

"There were 121 QBurke investors whose assets were taken by the State of Vermont and put into a Ponzi-scheme, who never would have invested in Q-Burke if they were provided with the substantive and material information that the Defendants possessed," it says.

Last week, Scott said a special prosecutor was unnecessary "at this point."

"We're relying on the advice of our counsel, the attorney general, and his office and staff," he told reporters. "I believe they're acting in our best interests as our attorneys."

But whose best interest? As part of defending state employees, the attorney general is holding back information from the public (which the AG is also supposed to represent) that would help Vermonters understand what happened and their possible financial exposure.

"[EB-5] is a black mark on our state and has caused reputational harm." Attorney General T.J. Donovan tweet this

When Fair Game followed up, a spokesperson for Scott added, "If there was any evidence whatsoever of impropriety by state officials, Gov. Scott would expect any or all of the federal law enforcement agencies to aggressively investigate and prosecute. This is why a special prosecutor is not necessary at this time."

Scott misses the point. Impropriety doesn't always rise to criminal behavior. We can't count on the feds to tell us what happened if their review finds no criminal wrongdoing.

Scott insists that Donovan is just doing his job.

"I wouldn't say it's a fair strategy to hide the state's role at all, but it's just part of their legal strategy that they've been utilizing from the very beginning," Scott said.

Donovan concedes that his roles conflict. He said he was "ambivalent" about Scott appointing a special counsel.

On the one hand, he believes that state officials made "good faith decisions," but he also wants the public to be reassured. The fraud "is a black mark on our state and has caused reputational harm," Donovan said. "I want to restore people's faith in state government ... and if that means that you bring in a special counsel to review ... who did what, when — I'm fine with that."

Donovan said he hoped a review by State Auditor Doug Hoffer would shed light on state officials' actions. But Donovan conceded that he won't release all the records he has to Hoffer until the litigation is settled. He's also blocked Hoffer from interviewing state officials.

Even the most tenacious state auditor doesn't have subpoena power; instead, Hoffer will have to depend on state officials to cooperate with his probe.

The last few months were rocky at times for the Vermont Climate Council, including "palpable tensions" between some of its members and Scott administration officials over who would write the plan and what its focus would be.

The tension appears to have decreased, which is key because the council has a big task: to meet the ridiculously short December 1 deadline set by the legislature for a report that will affect us all, including how we get the energy to keep our homes warm, get to work and farm; where we build our houses; and how we protect our forests.

The report was required as part of the Vermont Global Warming Solutions Act, passed in September 2020. The act requires Vermont to reduce greenhouse gas emissions significantly and develop strategies to mitigate the effects of the climate crisis, such as increased flooding. The council includes Scott administration officials and experts picked by the Vermont House and Senate.

Administration Secretary Susanne Young and Natural Resources Secretary Julie Moore pushed for state employees to draft the plan. Other panel members — including Lauren Oates of the Nature Conservancy and Chris Campany of the Windham Regional Commission — insisted that the council help with the writing and were frustrated and bewildered by the administration's refusal, particularly given the tight timeline and that state employees designated to work on the plan were already stretched thin.

Council member Abbie Corse, an organic dairy farmer from Whitingham, called the process "abhorrent," as councilors had requested since July to help, and the issue had remained unresolved into September.

Given the governor's veto of the act that created the council, some panel members worried privately that the administration would water down the plan. Mistrust was heightened when a timeline for the work called for the council to receive the plan on November 22 — one week before the adoption deadline. Moore said that was a misunderstanding.

"We hadn't done a great job explaining what the drafting plan was so that folks felt confident that their voices were going to be heard," Moore told me last week.

Moore said having state employees draft the plan would ensure meeting the deadline. Accountability concerns, she told councilors, were "gnawing at the pit of my stomach."

Young worried that involvement by council members would lead to a "perception ... that a self-selected group of councilors will be driving this bus in a direction that they feel very strongly about" and might not include what the report required.

After pushback from councilors, Moore said draft sections would be shared expeditiously. The recommendations will come from the council subcommittees that have been meeting for months. Council member Dr. Lesley-Ann Dupigny-Giroux, the widely respected Vermont state climatologist and a UVM professor of climate and climate change, will author a key section, Moore said.

Campany wants to move on but wishes so much time hadn't been wasted. The unexpected drama left him exhausted.

"When you're not expecting conflict and just having a discussion about how commissioners might be engaged, and you wind up basically being accused of coming up with a process that somehow is going to lack accountability and responsibility and [is] drafted outside of the public eye ... that frankly kind of took me aback and just made me really exhausted, because I didn't understand where that was coming from."

Congratulations to WCAX-TV alum Eva McKend, who just landed a job at CNN as a national political reporter.

The native New Yorker worked at Vermont's CBS affiliate, WCAX, from 2015 to 2018 as an anchor, producer and reporter. She was named a "rising star" by Vermont Business Magazine in 2016.

Most recently, McKend was an on-air congressional correspondent for Spectrum News, a cable news outlet, where she covered Senate Majority Leader Mitch McConnell (R-Ky.) She is a graduate of Swarthmore College and the Newhouse School of Public Communications at Syracuse University. She won several awards for a series she recently did on Black hemp farmers in Kentucky.

She told her Twitter fans she's thrilled about her new job at CNN.

"Growing up as a dark-skinned Black child, I didn't know if I would be able to have a career in TV. There were times I didn't feel it was possible for a person that looked like me. I leaned on faith, worked hard, asked the questions that needed answers and networked exhaustively," she wrote.

Meanwhile, WPTZ-TV chief meteorologist Tom Messner announced on Tuesday that he will retire this fall. Smiling Tom has been with the NBC affiliate for more than 30 years and is a member of the Vermont Association of Broadcasters Hall of Fame. He's also a fan favorite of Seven Days readers, who have frequently named him Best Meteorologist. He'll wrap up at the end of November.

"I'm honored to have served my neighbors and our communities, and to have had the privilege to personally meet so many of our viewers throughout my 31 years at NBC5," he said. "Your amazing support and trust have allowed my family to build a home and life in a place that we truly love. I'm forever thankful."

The original print version of this article was headlined "Wanted: Independent Prosecutor"