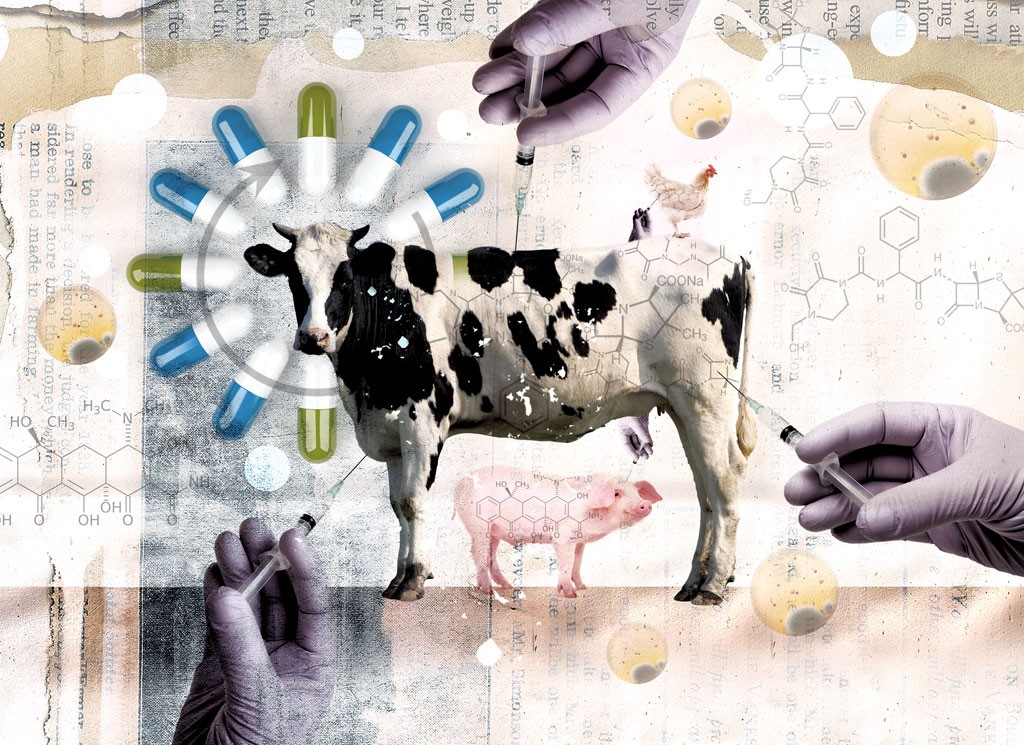 Montpelier resident Elizabeth Parker has always been conscious about antibiotic use — and overuse. She raised four children and only doled out antibiotics once. "Antibiotics should be there in those extreme circumstances so they can help when help is needed," said Parker.

But when her partner fell seriously ill in 2009, antibiotics didn't help; he'd come down with an antibiotic-resistant liver infection. The more bacteria are exposed to antibiotics — through over-prescription, for instance, or liberal use in agriculture — the more likely drug-resistant strains are to evolve. Enter the superbug.

That's driving a new coalition of volunteers and activists in Vermont to rally for a federal ban on the nontherapeutic use of antibiotics in agricultural settings. Currently, 80 percent of antibiotics in the United States are consumed on farms; many are the same drugs routinely prescribed to fight human infections.

Spurred by her partner's brush with an uncontrollable infection, Parker was among the volunteers who pushed hard to get the Montpelier City Council to take up the issue in October. The capital city was the first Vermont municipality to pass a resolution asking the state's congressional delegation to support legislation that restricts antibiotic use on farms. The resolution also puts on record the council's support for statewide and national bans on the nontherapeutic uses of antibiotics in livestock production.

Parker has been working to get similar initiatives on Town Meeting Day ballots in neighboring towns. So far, she and fellow activists have gathered more than 800 petition signatures in Vermont "to urge Congress to take action on antibiotic use on farms."

On Monday the Burlington City Council took up a proposed resolution similar to Montpelier's, and activists and concerned citizens weighed in. Selene Colburn, a Progressive councilor who helped spearhead the effort, said her elder daughter spent years battling a recurrent case of Methicillin-resistant Staphylococcus aureus, aka MRSA.

"It was a pretty terrifying experience for us and we were really lucky to be able to contain and treat it," said Colburn. "But I definitely have firsthand experience with the health risk posed by antibiotic resistance, and it's not a pretty picture."

Colburn wasn't the only one to mention MRSA. In the public comment portion of the meeting, James Wilkinson told councilors he's spent years working on Vermont dairy farms, but only recently became aware of the health risks when a friend nearly died from the antibiotic-resistant staph infection.

"Whatever happened to the natural way of raising livestock instead of pumping them with chemicals?" Wilkinson asked.

The council wound up referring the proposed resolution to the city attorney and is expected to vote on it December 15.

What worries activists most is so-called nontherapeutic applications for antibiotics on farms — that is, dosing healthy animals with antibiotics over long periods of time not to treat a specific ailment but to encourage growth or ward off potential illness.

Feeding sub-therapeutic doses over an animal's life "creates the perfect conditions for these bugs to evolve," said Laura Mistretta, a field organizer with Food and Water Watch, a Washington, D.C.-based nongovernmental organization and consumer-rights group.

In other words, bacteria on farms where antibiotics are heavily used can, over time, develop resistance to that medicine. Then the bacteria can hitch a ride off the farm — on animals, workers or in the air, soil or water — and into the wider world. Some bacteria show up on grocery-store meat; in 2011, antibiotic-resistant salmonella on ground turkey prompted the third-largest food recall in U.S. Department of Agriculture history.

About 22 percent of the antibiotic-resistant bacteria that are infecting humans have been linked to farms, said Mistretta.

Consumers can choose to buy meat that has been raised without antibiotics; organic standards, for instance, don't allow the use of any medication. But ultimately that doesn't inoculate individuals, who can catch bacteria-resistant infections and fall ill. The health risk doesn't come from ingesting meat that's been treated with antibiotics, but rather from resistant bacteria in the environment.

"Bacteria are pretty amazing at exchanging genetic information," said Mistretta. So, out in the world, antibiotic-resistant bacteria can pass on those skills to other bacteria. "The fear is, once those genes are out there, it's kind of a matter of time until they spread across the country."

It sounds scary because it is. Resistant bacteria can cause infections that are hard to treat, according to the Centers for Disease Control and Prevention, and can lead to longer illnesses and more hospitalizations. "Multi-drug-resistant infections are on the rise," reports the CDC, "while the development of new antibiotics is coming to a standstill." The center estimates that at least two million people in the United States get infected with drug-resistant bacteria every year, and that at least 23,000 die annually as a direct result of those infections.

Vermont's agency of agriculture doesn't keep numbers about antibiotic use on farms, according to state veterinarian Kristin Haas. The state and FDA do track instances when farmers ship animals to slaughter that have higher-than-allowable concentrations of antibiotics in their flesh, or have been dosed with medicines that aren't approved for human consumption in any concentration.

These violations are caught during spot-checks at slaughterhouses — sometimes randomly or if the animal comes in sick or lame, exhibits an obvious injection site or shows other signs of recent antibiotic use. State and federal inspectors — who work in tandem at most facilities — test the carcass for antibiotic residue after the animal is dead.

In 2011, the agency of ag asked the legislature for permission to levy state-specific fines for residue violations. The hope, Haas said, was to use it to haul farmers in, talk about the issue, get them up to speed on what they should be doing differently, and fix the problem. In practice, farmers are paying the fines without contesting the violations.

Since 2011, when the legislature granted the agency this power, it has slapped eight producers with $1,000 penalties. Haas said the problem is more pronounced among dairy producers, who focus carefully on the rules governing milk but may not be as well versed, or careful, when it comes to the rules governing meat production. Currently, one beef-producing Vermont dairy farmer is listed on the "repeat offender" list for violating FDA regulations more than once in the last 12 months.

Haas said that there's "a huge amount of controversy on both sides of the issue" when it comes to banning nontherapeutic drug use on farms. She's personally against broad, sweeping bans — and she said farmers and veterinarians should look to the FDA for guidance.

The FDA released two documents this year intended to promote the judicious use of medically important antimicrobial drugs in agriculture. The goal is twofold: to encourage the phase-out of using these drugs in already healthy food animals, and to bring the therapeutic use of drugs under the oversight of attending veterinarians.

Using these drugs with guidance from experts, said Haas, "I think it's possible for farmers to do right by their animals and also follow the rules and protect the food supply."

Parker isn't so sure. She pointed out that health officials have worried about the danger of increased antibiotic use since the 1960s. She's skeptical that voluntary directives from the FDA will get the job done.

Parker and other Vermont activists instead want to see Congress pass legislation that, for the time being, is tied up in committees: the Preservation of Antibiotics for Medical Treatment Act in the House and the Preventing Antibiotic Resistance Act in the Senate. If both were to become law, antibiotics that are prescribed to humans would no longer be allowed for use in nontherapeutic instances on farms. But, if an animal is sick, farmers would be allowed to work with their vet to find the right antibiotic to use — regardless of whether it's used in human health applications.

Doctors like Anna Carey, a family physician in Cambridge, acknowledge that medical professionals need to step up to the plate, too, and not overprescribe antibiotics to people. Some of her patients are adamant about receiving an antibiotic — even if it's to treat a virus, which an antibiotic can't fight. She stressed the importance of patient education, but admitted that education takes time and energy.

"When you're faced with trying to see all the folks that you need to see, sometimes it's just a lot easier to write that prescription," said Carey.

Meanwhile, Carey said she's seeing the effects of antibiotic overuse firsthand: She's having to prescribe much stronger antibiotics for common infections than she did a few decades ago.

The push to make a statement is under way across the country; Montpelier is one of 39 cities nationwide that's passed a resolution addressing antibiotic overuse. While the movement is largely symbolic, Mistretta said it is a useful tactic for calling attention to the issue.

Dona Bate, a first-term city councilor in Montpelier, agreed. She called the resolution, which passed unanimously, a "win-win." The council made a statement and, she said, sent a message of support to Vermont farmers who choose not to use antibiotics on their farms.

"I always believe in the trickle-up as much as possible," Bate said. While the regulation of these medicines falls to the feds, she said, it's still a problem that affects the Vermont community.

"Vermont leads the way in a lot of different avenues," she added, "and I hope we lead the way here, too."

The original print version of this article was headlined "Superbugged: Vermonters Rally Against Antiobiotic Overuse on Farms"