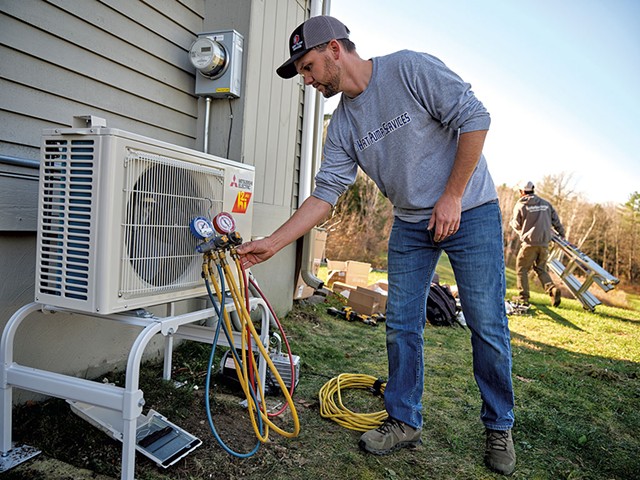 A dramatic increase in the cost of fossil fuels has sent more Vermonters scrambling this autumn to weatherize their homes, line up financial assistance and find cheaper heating options. Energy advocates hope the search will lead householders to cleaner fuels that in the long run are easier on the pocketbook — and the climate.

Businesses that sell woodstoves and cordwood report soaring demand, Efficiency Vermont has seen a surge of interest in switching to electric heat, and demand for fuel assistance is on the rise.

The reasons are not hard to fathom: Nearly 40 percent of Vermont households heat with oil or kerosene, and the war in Ukraine has helped drive up those fuel prices by about 50 percent. According to the state Department of Public Service, the cost of a gallon of heating oil has risen from an average of $3.59 this past winter to $5.18 in October. Kerosene has jumped from $4.04 a gallon to $6.26.

"We could be in for one of the more difficult winters we've had in a very long time," predicted Matt Cota, government affairs director of the Vermont Fuel Dealers Association.

Europe's effort to wean itself off Russian natural gas has contributed to the spike, as countries seek replacement fuel sources such as diesel and liquefied natural gas from North America, Cota explained.

Imported fuels power Europe's cars and trucks, as well as its power grid. The economic rebound following the pandemic shutdowns, which led to higher demand for jet fuel, has also contributed to higher prices, Cota said.

Lorie Westall, co-owner of the Vermont Woodshed in Underhill, has witnessed the result. She said demand for the company's cordwood is unusually strong, with deliveries booked through December.

"We are very, very busy," Westall said of the family-owned business.

Many customers use wood as a supplemental heat source, Westall said, but when fossil fuel prices climb, they burn more wood. The company buys its wood from local loggers and recently raised prices by $25 a cord — to $475 for kiln-dried and $385 for seasoned — to cover the higher cost of fuel for deliveries, she said.

Stove sales are up sharply, too, as consumers take advantage of generous federal and state incentives for the installation of efficient wood and pellet stoves, according to Roy L'Esperance, owner of the Chimney Sweep Fireplace Shop, a retailer in Shelburne and Berlin.

To overcome anticipated supply chain challenges, the company put in large orders for stoves early, and it has paid off with plenty of inventory, L'Esperance said.

"Last year was our record year out of 47 years in business, and this year is going to be even better," L'Esperance said.

There has also been a surge in homeowners considering a switch to electric heat, said Jeff Buell, public relations manager at Efficiency Vermont, a nonprofit that helps people save energy.

The Winooski-based program's website outlines a wide array of energy efficiency incentives and rebates. Recent web traffic tells the story. Compared to last year, visits to pages about heat pumps are up 32 percent, wood and pellet stoves up 52 percent, pellet furnaces up 72 percent, and weatherization up 103 percent, Buell said. Calls are flooding in, too.

"There is a noticeable sense of urgency in identifying solutions in the calls we are fielding from customers," he said.

James Zeno, owner of Hinesburg-based Heat Pump Services, said an increase in demand for the devices is related to high oil prices.

But it's far from the only reason. Customers are keen to reduce their carbon emissions and also to improve the comfort of their homes during the hotter summer months, he said. The most common type of heat pumps, which use electricity and refrigerant to warm or cool the air, do both tasks highly efficiently, he said. The systems don't work as well in very cold temperatures, though, and are rarely used by Vermont residents as their sole source of heat.

Switching to heat pumps takes some planning, so Zeno's crews are busy installing systems for people who ordered them some time ago, not those reacting to the recent rise in fuel prices.

"People who are just thinking about it now are not going to be able to get something installed until well into winter," he said.

Alternative heating sources such as heat pumps can simultaneously save people money and reduce carbon pollution.

Environmental groups have argued for years that greenhouse gas emissions from fossil fuels such as fuel oil, kerosene, propane and natural gas are changing the climate in devastating and irreversible ways. Heating fuels contribute about a third of Vermont's carbon emissions, second only to transportation.

In addition to their climate impact, some fossil fuels — fuel oil, kerosene and propane — are particularly expensive and volatile in price. Natural gas, which is a regulated utility, has seen more modest increases but is still up 22 percent over last year. The costs of electricity and wood pellets are far more stable over time and cheaper when measured in heat output per dollar.

The price spike in fossil fuels means households that switch to electric or efficient wood heating options will save even more, according to Jared Duval, executive director of the Energy Action Network. Much like electric vehicles, efficient heating options can have higher up-front costs but pay for themselves over time, Duval said.

For example, a heat pump water heater costs about $5,000 to install and operate for 12 years — about half the cost of a propane-fueled one over the same period, he noted.

A recent analysis by the Vermont Agency of Natural Resources found that the significant investment in clean heat systems needed to help the state reach its 2030 climate goals would result in net savings of $2 billion through 2050, mostly from lower fuel costs, Duval said.

Those savings equate to $250 a year for the average household, more if fossil fuel prices keep soaring, Duval said. "We need to help people get off this roller coaster because it's hurting Vermonters in so many ways," he added.

That was the goal of the Clean Heat Standard that Gov. Phil Scott vetoed earlier this year. The bill would have required fossil fuel heating companies to gradually shift their sales to cleaner options or pay penalties. Scott argued that the bill risked hiking fuel prices and left important questions unanswered. Lawmakers have said they'll try to pass it again this session.

Homeowners who can't or don't want to wean themselves off fossil fuels can still reap savings from weatherizing their homes. Financial assistance is often available for lower-income residents.

"No family should have to choose between 'heat or eat' in Vermont." U.S. Sen. Patrick Leahy tweet this

"But this year, applications are higher than normal, and there is much higher anxiety in those we are talking to in regard to the cost of fuel," DeCoster said.

Partly because of the tight labor market, the program's backlog has soared. Wait times have grown from about nine months to nearly two years, he said.

The state has plowed tens of millions of dollars into weatherization efforts in recent years, working to get the word out to homeowners through utility companies, websites such as buttonupvermont.org and special community events. At one such gathering in Brandon, scheduled for Saturday, November 12, attendees will learn about insulating water pipes, sealing leaky windows and doors, and installing spray foam.

"The goal of the state is to help Vermonters in need, and we do recognize this is going to be a very difficult heating season," said Nicole Tousignant, who works in the economic services division of the state Department for Children and Families.

The state's federally funded Low-Income Home Energy Assistance Program, or LIHEAP, expects to subsidize the heating costs for about 20,000 families this year, an 8 percent increase over last year.

In recognition of the fuel cost spike, the federal government awarded Vermont an additional $5.7 million for the program, bringing the state total to $25.4 million. The money was part of a $1 billion boost supported by U.S. Sen. Patrick Leahy (D-Vt.), chair of the Senate Appropriations Committee.

"No family should have to choose between 'heat or eat' in Vermont or in any community across the country," Leahy said in a press release.

As a result, families are entitled to about $625 more than the former seasonal total of $1,300, for a new maximum of about $1,900 in assistance this winter. The state has a goal of paying 30 to 40 percent of an average family's heating bills, Tousignant said.

The state also recently added $1 million to a crisis fuel program to help families who run out of money to pay for fuel, as well as $500,000 toward an emergency program to help residents repair or replace heating equipment.

Duval, who is also a member of the Vermont Climate Council, said it's absolutely necessary to boost programs that help people stay warm in winter. But it is also vital for the state to get more residents off fuel sources with so many financial, environmental and health downsides.

"Over the long term, we need strategies that can shift away from the underlying problem, which is fossil fuel dependence, rather than putting our money into what really ends up going to phenomenally profitable, multinational fossil fuel corporations," he said.

To learn more about the LIHEAP program or other heating assistance, call the benefits hotline at 1-800-775-0516 or go online to learn more or apply at dcf.vermont.gov/benefits/eap.