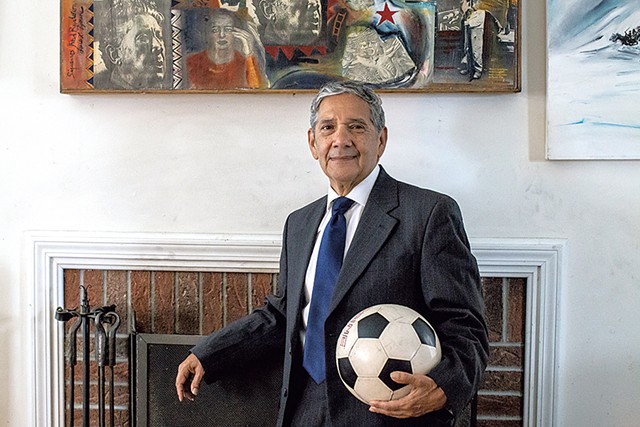 Luis Lázaro Tijerina says he's no Russian pawn, though the Burlington resident regularly writes for a Moscow-based website linked to the Kremlin.

The self-described Marxist intellectual has had 16 stories published by USA Really, a website launched in May by the Federal News Agency, a media venture allegedly funded by an ally of Russian President Vladimir Putin. Last week the New York Times reported that USA Really might be part of the latest — and most overt — Russian tactic to manipulate U.S. elections.

The site mostly deals in absurd and inflammatory news and opinion, often written in stilted, strange language that reads as though it's been fed through Google Translate. It's one of three Russian publications for which Tijerina has written that are associated with the country's online influence campaign, according to the Times.

But during an interview last week at a Burlington café, Tijerina defended his contributions to the sites as an expression of his own views, not Russia's. USA Really "gave me the freedom to write what I want," he said. "They've never told me to write in praise of Putin."

His work on USA Really includes articles on very local subjects. He has decried gentrification in Burlington's Old North End and twice supported a nurses' strike at the University of Vermont Medical Center. Other stories have dealt with broader topics, including the United States' military budget and what he described as "America's soccer monoculture."

Tijerina, who is 72, sported a corduroy coat and neatly combed salt-and-pepper hair. In conversation, he slipped between self-deprecation and condescension. He laughed at the very possibility that he could help the Kremlin influence American elections. At another point, he cut himself off midway through a monologue on Russian history in the 1930s. "This is too complex for you," he told a reporter.

Tijerina said he is not a Putin supporter. He praised Special Counsel Robert Mueller's investigation into Russian interference in the 2016 election and called President Donald Trump "a bourgeois Mussolini."

Regardless of Tijerina's intent, Russians with more sinister motives will happily use and redistribute the news he writes, according to Kevin McKenna, a UVM professor of Russian language, culture and literature. Those articles are as useful to them as any covert intelligence gathering. "They don't need a spy," he said. "He's already doing what they want."

Vermont Secretary of State Jim Condos, who oversees the state's elections, said in a statement to Seven Days that he'd never heard of USA Really. He couldn't speak to whether the site is, in fact, a threat but said any investigation or enforcement would be the feds' responsibility.

"The prospect of a propaganda website, based in Russia and operated by Russian agents, designed to influence U.S. elections is incredibly alarming," Condos said.

Tijerina insisted he's no propagandist. "I'm a writer, a historian, a published poet," he said. "How am I a danger to anyone?"

Tijerina was born in Kansas to Mexican American parents. His father died when he was 9. The following year, Tijerina read Leo Tolstoy's War and Peace, which he said began his lifelong affinity for Russian literature and culture.

He attended Kansas State University on a track-and-field scholarship and met the friends who influenced him to become a poet and a Marxist. He found he spent more time working as a student organizer protesting the Vietnam War than studying, so he dropped out after his junior year.

He lived in Québec for two years to escape the draft but in 1975 joined the Army in an effort "to understand more about U.S. imperialism," he said.

After his three-year hitch, Tijerina flitted between places and jobs, moving to Hanover, N.H., then to Seattle. He said he married and divorced and eked out a living by doing clerical work, selling oil paintings and coaching soccer.

Luck struck when he moved to Brattleboro in 1990. A mutual acquaintance introduced him to Ruth Dunlap Bartlett, a British actress and an avowed communist who was vacationing in town. Bartlett became a friend and benefactor.

She encouraged him to get his master's degree at the Vermont College of Norwich University in Montpelier. She even bought him a condo in Burlington in 1998 so he could commute to the school. Tijerina moved to the Queen City and enrolled in the program; he earned a bachelor's and then a master's degree in history, in 2000. He wrote his thesis on the Soviet military.

For years, Tijerina and Bartlett talked on the phone almost daily, he said. Her parting gift before she died in 2009 was a bust of Joseph Stalin.

Tijerina began writing for Russian news sites nearly three years ago, he said, first for Katehon, a Russian think tank backed by the Kremlin, and later for Geopolitica.ru, a website that adheres to the ideology of Aleksandr Dugin, a Russian political philosopher with ties to Putin and known for his fascist beliefs. Both websites have been named by the New York Times as part of a larger Russian media effort to support President Trump and interfere with American elections.

Leonid Savin, a former editor of Katehon and an editor at USA Really, asked Tijerina to start writing for the new platform when it launched. The site, originally named "USA Really. Wake up Americans," publishes divisive content reminiscent of the news that Russian bots circulated on social media before the 2016 election.

It's intended to bring attention to "problems that are hushed up by major American publications controlled by the U.S. political elite," according to an April press release from the Federal News Agency.

Articles range from the strange ("Woman Hid Her Mother's Corpse to Watch the Stages of Death") and the sensational ("Pregnant Native Woman Murdered by Having Her Baby Cut Out of Her Stomach") to the politically divisive ("Laughed Off the Planet: Trump Disgraces U.S. at the UN").

But it's been perfect for Tijerina, who relishes the chance to write without constraints. The website has never turned down a story he's pitched, nor does it edit his work. Instead, he hires an editor in Philadelphia to review his writing before he sends it in.

He declined to identify his editor or his contacts in Russia and would not say what he is paid by USA Really. One freelancer told the Times that he received between $50 and $100 a story.

Occasionally, an editor will ask for a regional story about Vermont or New England. "They want to know about that specific place for political reasons, economic reasons and social reasons," Tijerina said.

There may be an explanation for that. When it comes to painting a negative picture of the U.S., "an account about chaos, confusion, malfeasance, complaints, inequalities, written by a local Burlingtonian instead of from Moscow or St. Petersburg — that is infinitely more effective," McKenna said.

Russian groups may also "spin off the stories" written by people such as Tijerina and "use that in classrooms, use that in labor unions, use that in reporting to consumers in Latvia, Lithuania, Estonia — the likely places that will be the next Ukraine," he said, referring to Russian annexation of Crimea in 2014.

Representatives from the site did not respond to a request for comment, but in an interview with the Times, the website's founder, Alexander Malkevich, denied allegations that he is associated with Russian troll farms, the state-sponsored groups that spread misinformation through inflammatory online posts. Malkevich called the notion that Russia could alter American election outcomes "foolish."

Tijerina is less certain. He acknowledged that "there are those who are possibly agents" and "Russian nationalists" writing for USA Really, Katehon and Geopolitica.

According to Tijerina, journalists from both the Times and NPR interviewed him over the summer about his role with the site. He maintains that his answers were so mundane that they didn't quote him.

Tijerina describes himself as a free agent and an outsider, moving between cultures and trying to piece together a livelihood. Since moving to Burlington, Tijerina has written half a dozen books, including poetry and short stories, five of which were published by Ra Press in South Burlington. He served as a Spanish translator for a 2003 Seven Days story about Mexicans working on dairy farms in Vermont. He receives Social Security benefits and, to make ends meet, referees youth soccer and rents out a room in his home.

He leaves Burlington to visit Paris or Québec City as often as he can; he has few friends in Vermont, he said, and as a Mexican American Marxist intellectual, he sees himself left on the margins.

Tijerina derided the Queen City's "anti-intellectual" environment saturated with what he called "undercover racism." That's partly why he's found a home writing for Russian publications, said Alex Gabbrielli, who lives in Virginia and served in the military with Tijerina.

But Tijerina knows what he's gotten himself into, Gabbrielli said. "Some of them are probably duped," he said of other USA Really writers. "I don't think Luis is duped."

Gabbrielli was quick to say Tijerina is not a Russian spy. But the feds "could still make things a little sticky" for Tijerina because of the sites he writes for, Gabbrielli suggested.

That doesn't appear to deter the Vermonter.

He has completed an unpublished novel about a Mexican American soccer coach in Barcelona tugged between his Russian sympathies and his love for an American woman working for the Central Intelligence Agency.

The story line is "not real," he said.

But, Tijerina added: "You have to use what you know, right?"