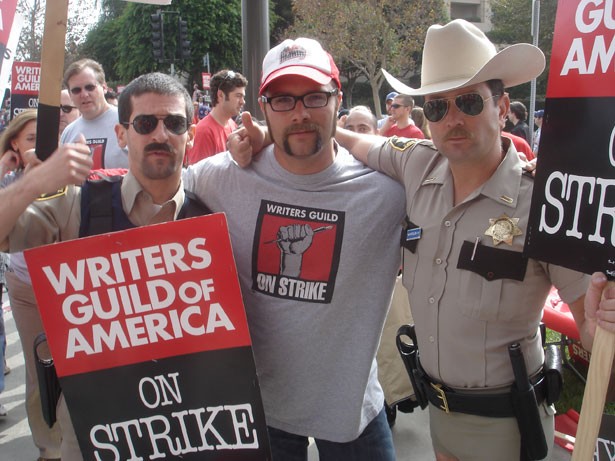 For weeks now, some 12,000 Writers Guild of America (WGA) members have been marching along well-organized picket lines in Hollywood. One of them is former Swanton resident Blaise Hemingway, a graduate of Missisquoi Valley Union High School and SUNY Plattsburgh

The strike is hurting our entire community, Hemingway, 30, said last week via email from his home in Burbank, California. People are losing jobs. Films that people have struggled for years to make are dying. Were simply trying to stay positive and make an unfortunate situation bearable.

The strike, which began November 5 after the WGA and the Alliance of Motion Picture and Television Producers reached an impasse on their basic 3-year contract, seemed inevitable even a year ago. The writers for film, television and radio had come head to head on a key issue: residuals on film and TV broadcasts over the Internet. Add to that DVD residuals and union jurisdiction over animation and reality programs. Studio negotiators offered a proposal last week. Talks were to resume again this week. Meanwhile, WGA members walk picket lines for 20 hours a week.

While the main issues at the center of the strike have yet to affect me, Hemingway said, I do believe in their validity.

Hes been demonstrating outside Walt Disney Pictures, where he landed his absolute dream job after penning a warmly received script his seventh. Blaise says he cant talk about any current projects, but his 2006 short film The Bracelet, which he wrote, directed and produced, was a career boost. Before the strike, Hemingway had been writing original films and rewrites for existing studio properties, with phenomenal, intelligent and creative people, he said. Joining the WGA is a must for screenwriters, he explained.

The strike has given me an opportunity to connect with writers from all worlds comedy, drama, television, animation, variety, you name it, said Hemingway, who also acts. (See some of his work at www.cinemamavericks.com.) Theres been a strong sense of unity among all the writers, and with the film community as a whole, he added. At the end of the day, were all lucky to be doing what we love, and want to get back to work as soon as possible.

Bringing in zero income at the moment, hes got another reason to be hopeful for a strike-ending resolution. Hemingways wife just gave birth this week to their second child, Rose Muriel.

Luckily, knowing that the strike was coming, we were able to save enough to ride it out for a few months, Hemingway said. But if it goes long, you may find me opening a lemonade stand in front of my house. The last strike, in 1988, lasted 22 weeks.