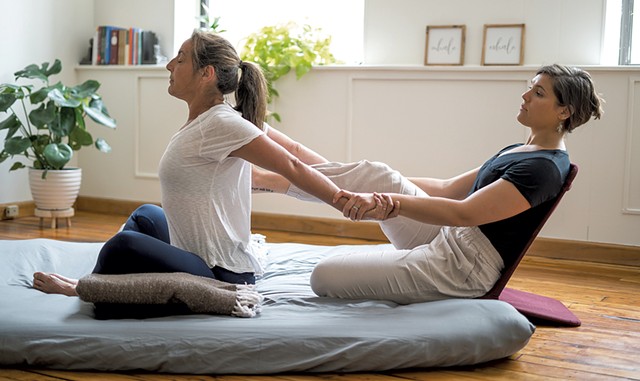 Start by shaking out an arm or a leg, and feel the movement through your limbs. Notice how your breathing changes as you shift between stillness and motion. If you'd like, put your hand over your heart. Then ask your body a simple question: "What do you need right now?"

According to registered yoga therapist Sarah Quinttus, these are the first steps to practicing yoga therapy, a burgeoning field dedicated to using the principles of yoga to treat mental health. Quinttus says the therapy has been used successfully to treat depression, anxiety, insomnia, trauma and more. She believes anyone and everyone can benefit.

"Being able to make that mind-body connection is a gift." Sarah Quinttus tweet this

Quinttus started her Burlington private practice, Quinttusential Yoga Therapy, last March. She sees yoga therapy as a holistic way of handling the disconnection and isolation brought on by the pandemic.

"I think our community needs this, our world needs this, to be able to live life in our bodies," Quinttus said in an interview. "So much of the world makes us live up in our brains in this all-over-the-place way. Being able to make that mind-body connection is a gift."

Yoga therapy, according to the International Association of Yoga Therapists, is "the process of empowering individuals to progress toward improved health and well-being through the application of the teachings and practices of Yoga." The practice combines yogic elements and postures, as well as aspects of guided talk therapy. But yoga therapy, which emerged in the U.S. as a formal practice in the 1980s and has recently come to Vermont, aims to be something all its own.

Sessions, which usually run 60 to 90 minutes and are typically one-on-one, are based around yoga poses and breathing exercises. Quinttus practices Phoenix Rising yoga therapy, an approach focused on deepening one's relationship with the self, as opposed to working toward a physical goal. The style aims to offer a therapy that is "client-centered, open-ended and non-directive," according to the Phoenix Rising School of Yoga Therapy website.

Though yoga therapy incorporates yogic principles, Quinttus emphasized that it is, first and foremost, therapy. In fact, Quinttus estimated that more than 80 percent of her clients have no previous yoga experience. While Quinttus herself came to the therapy from a yoga background, she said clients who don't are often even more open to yoga therapy's benefits.

"They're not coming with any preconceived expectation or notion of what you'll get," Quinttus explained. "It really allows them to walk in with such an open and receptive [head]space." 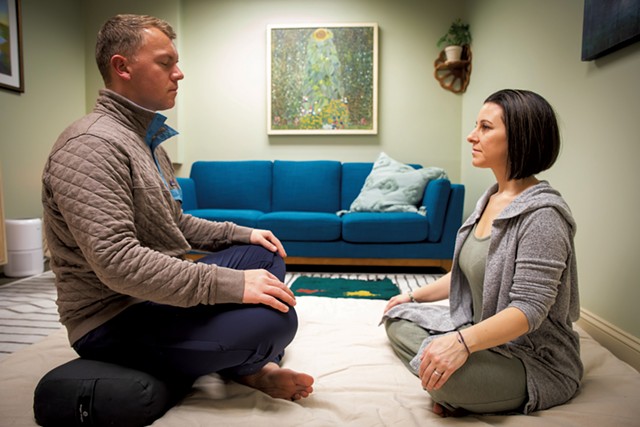 For Christine Badalamenti Smith, a registered yoga therapist and the owner of Yoga Oggi in Williston, yoga therapy changed everything. When Smith turned 30, she found herself overcome by anxiety, unable to change the TV channel, listen to music, eat dinner or even brush her teeth. She knew about therapy and knew she needed help.

When her talk therapist suggested that Smith needed to reconnect with her body, she signed up for a yoga class. Smith had heard of yoga therapy, and she recognized the wholeness she felt by combining talk therapy with yoga practice. Nearly 20 years and 1,000 hours of training later, Smith has dedicated her life to the practice.

The field of yoga therapy is composed of diverse disciplines. Some schools focus on physical poses and building up technique and strength. Phoenix Rising, which Quinttus and Smith practice, centers on the belief that "yoga is an accessible practice that inspires connection, compassion, and joy," according to the school's website. Quinttus and Smith studied together at the Phoenix Rising School of Yoga Therapy at its original location in Massachusetts. (The school is now based in Bristol and Colorado.)

Waterbury yoga therapist Lucy D'Aponte is another Phoenix Rising alum but came to yoga therapy from a more physical background. A dancer and physical therapist, D'Aponte sought out poses for her clients and herself to help them stretch, strengthen and alleviate injuries. She said she quickly realized the potential for yoga as a practice of mind-body connection. D'Aponte noted that the majority of her clients don't come to her expecting a traditional yoga class.

"A lot of work that I've done is more about people finding out that yoga is good for anxiety or trauma or chronic pain," D'Aponte said. "They've had a physical ailment that just doesn't go away, and they realize there's more to what their body's holding on to." 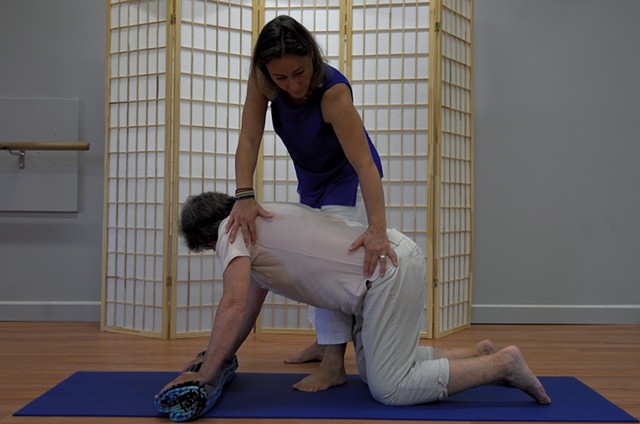 D'Aponte hopes to expand the practice to younger students. She currently works with students from pre-K through high school in the Milton Town School District using Phoenix Rising techniques to encourage wellness.

Every yoga therapy session is unique and client-based, Quinttus, Smith and D'Aponte said. Before getting on a mat, each session begins with a conversation between client and therapist to develop a clear sense of the client's wants and needs. An ongoing dialogue throughout the session guides the structure of the therapy.

Mike McKinley, a Burlington resident, sought out yoga therapy last summer when he knew he needed a reset. McKinley, a bassist, said yoga therapy reminded him of pivotal, near-spiritual experiences he had falling in love with music as a young man. When he leaves a session with Quinttus, McKinley said, he feels unburdened.

"It felt amazing to leave and be like, All this garbage I'm holding on to, I let it go," McKinley said.

Liz Carney, another Quinttus client, said she saw the expansive possibilities of yoga therapy from her first session. Carney came to the practice after reading The Body Keeps the Score by Bessel van der Kolk, a seminal text on how the body holds trauma. Carney, who also works with a talk therapist, said she sometimes finds herself coming to deeper and faster realizations when in a yoga therapy session.

"I could have the same realizations in talk therapy, but they feel deeper and more layered and more connected," Carney said, "because my body is the instrument."

Currently, yoga therapy is not covered under standard medical insurance or Medicaid, which makes it less accessible than other mental health therapies to those with financial barriers. D'Aponte noted that there have been conversations in the yoga therapist community about how that affects access. But coming from the medical world, D'Aponte said she fears that interference and regulation from insurance companies could have negative impacts on yoga therapy in other ways.

"I just worry about the standardization of it," D'Aponte said, "and how that would change the delivery."

For McKinley, finding yoga therapy was a matter of taking a leap and trying something new. His advice to potential yoga therapy clients, or anyone seeking a new path toward wellness: Just do it.

"It's not easy, self-care and doing something for yourself like that," McKinley said. "It's nice to be in a place like Vermont, because I feel like there's a lot of people out there searching who find similar things through different practices."

Smith agreed. "Once you come into a session and feel it, there's no question about what this is, what it's doing for you," she said. "My clients always come back."

For Quinttus, the reward of yoga therapy is sharing in her clients' emotional journeys. Quinttus said she feels grateful for the way yoga therapy changed her life and the way she can pass along her passion to others.

"I hold the space, but the client is doing the work, and it's big work that requires vulnerability, honesty, openness and bravery," Quinttus said. "I am constantly humbled by and moved by being able to watch that and facilitate that."