A bear hunter from Newbury says he got a face full of bear spray earlier this month after a Groton woman apparently took issue with his chosen pastime.

Butch Spear, the former president of the Vermont Bearhound Association, told Seven Days that he and a couple of hunting buddies were driving near Groton State Forest with a pack of hounds in their pickup on July 10 when they were confronted by a foul-mouthed animal lover.

Spear said the woman walked into the public road, blocked his passage, and then pepper sprayed him and his pals.

“My first words to her were to ask her to get out of the road,” Spear recalled on Monday. “She told me to go F myself and a bunch of other things.”

The incident, which both the hunters and the woman captured on camera, allegedly escalated from there.

An investigation by the Vermont Fish & Wildlife Department led game wardens to cite Liza Nanni, 61, for interfering with a hunter, simple assault and disorderly conduct. Her first court date is set for September 26 in Caledonia County Superior Court. She could not immediately be reached for comment.

Wildlife Wars: Animal Defenders Struggle to Change Hunting and Trapping Traditions in Vermont
By Kevin McCallum
Environment
Warden Justin Stedman, who patrols the area but did not investigate the incident, said he couldn't believe the initial report.

“This is a new one for us," Stedman said. “When I first heard about it, I thought someone was pulling my leg.”

Stedman said it appears a verbal confrontation quickly escalated into an unfortunate assault.

Bear hounding involves using packs of dogs to chase bears, either for hunting or for keeping them wary of humans — or both. The bear hunting season runs from September 15 to November 21. To prepare for the season, bear hounders in Vermont are allowed to train their dogs between June 1 and September 15.

Spear said he, his friend and his friend’s 13-year-old grandson were out looking for bears but hadn’t stopped the pickup or released the hounds when the woman walked into the middle of the road near her driveway and confronted them.

Spear said he told his companions to film the incident, having learned his lesson, he said, from having people misrepresent his actions.

He's become something of a lightning rod in the debate over ethical hunting in Vermont, unabashedly defending his sport against animal rights groups who advocate for hunting restrictions. He was a central figure in a Seven Days cover story from last September headlined "Wildlife Wars."

Spear declined to detail all that was said during the confrontation, citing the ongoing investigation. But as it escalated, he noticed the woman was holding what he incorrectly thought was a water bottle.

“She ended up pepper spraying all three of us,” Spear alleged.

Spear said he felt the woman should face additional charges and be jailed, especially given that one of the victims was a youth.

Asked if the woman may have feared that the trio were going to release hounds onto her property, Spear said he had no idea. He said he'd never met her before.

Bill Would Require Vermont Hunters to Eat, Skin or Mount Prey — Except Coyotes
By Kevin McCallum
Politics
Spear said he has signed agreements with most of the other residents on her rural road that allow him to run dogs on their property. He also noted that state law allows him to retrieve his dogs from private property where they are not welcome.

The virtual impossibility of predicting where hunting dogs will end up when they're hot on the trail of a bear is one of the primary criticisms of the sport. It's also the source of increasing  friction between property owners and bear hunters. 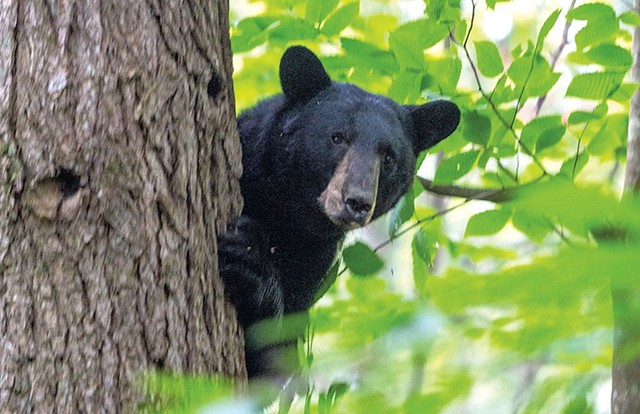 A bill that sought to ban hunting bears with dogs failed to gain traction in the legislature this year despite persistent campaigning by groups such as Protect Our Wildlife, which has painted the practice as barbaric.

But state wildlife officials have staunchly defended the practice as a Vermont tradition that serves a valuable purpose of keeping bears fearful of humans.

“I strongly condemn the criminal behavior that occurred in Groton,” Vermont Fish & Wildlife Commissioner Christopher Herrick said in a press release. “No matter how different our practices or approaches may be, we all must remain civil and respectful as we enjoy the outdoors.”