Vermont Vocalist Wants to Teach the World to Sing 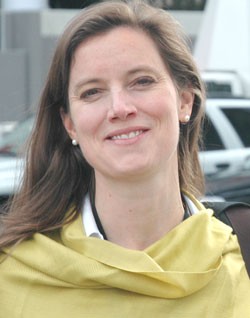 Shyla Nelson’s crystalline soprano has enthralled Vermont opera fans and made her an in-demand guest soloist around the region; her upcoming performances this summer include roles at the Green Mountain Mahler and Mozart festivals. But the Charlotte-based singer, a single mom of two, is also known internationally — and not only for singing. This week she’s embarking on a trip to India to teach as well as perform.

Over the course of her own voice training, Nelson has learned, and further developed, a technique that she now passes to students. She describes it as “a powerful bridge between who we are as human beings and how we choose to express ourselves in the world.” Grounded in exercises that focus on the core of the body, the procedure trains students to center themselves, physically and mentally. “In my experience,” Nelson says, “when people are engaged in the center of the body, it enables the voice to free up.” Singers can learn how “to tease out just the right amount of breath to produce the most healthy, efficient, resonant sound.”

On the surface there is nothing new in what Nelson is propounding; the idea of the body as an instrument, even a profound expression of the soul, appears in numerous ancient cultures. And any dancer or Pilates practitioner could extol the virtues of developing a strong core. Yet Nelson isn’t talking about ripped abs; her thoughtful discourse on the human voice promotes self-empowerment and unabashedly crosses into the spiritual realm. “As people take hold of this technique,” she avers, “it radiates out into every aspect of their lives.”

The word-of-mouth on Nelson’s coaching savvy has attracted a diverse array of students — among the 40 or so in Vermont are Phish bassist Mike Gordon and Miss Vermont, Ashley Wheeler. Though Gordon, who’s worked with Nelson since last fall, embraces her method’s metaphysical implications, he also speaks eloquently about how it has helped him as a singer in a rock band.

“With Shyla I work on the same exercises over and over, each week bringing new awareness to what’s happening in my body. Even my December 30 Higher Ground show was helped by trusting that my body is developing in a way to support the voice,” Gordon says. “The core muscles jump in to provide the force, the throat and jaw are relaxed so as not to impede, the tongue is in control, and all I’m doing is picturing an image which is the scene of the song and feeling it strum my heart strings.”

Wheeler believes her work with Nelson helped her cinch the “Talent” award at January’s Miss America pageant. Though she’d been singing all her life, Wheeler had not been formally trained. “My voice is more powerful because of the technique Shyla showed me,” she avows. “But also, when you get on stage, you can connect completely with what you’re doing.” Wheeler, 22, says she was pleasantly surprised by the “spiritual” aspect of her vocal training. “I felt really grounded and centered when I left for Miss America,” she says. “I totally credit Shyla.”

In addition to her local students, Nelson tutors approximately 200 more around the world through global teleseminars, “and soon, webinars,” she notes. “Thanks to technology, I can do that right from my home.”

Her students are not only singers; Nelson says her technique is beneficial “to any people who use their voice,” such as public speakers. “I can hear over the phone and diagnose immediately where there is tension in the voice,” she declares. In India, Nelson will present, and perform, for upwards of 3000 participants at an international wellness congress.

Before she gets there, though, she’s stopping in Australia for research on another project: a book about “the evolution of human consciousness as told through the history of the voice itself,” Nelson says. Aboriginal tribes, she explains, identify themselves “by a specific song rather than a geographical area.”

Can a self-help book for the rest of us be far behind? As a matter of fact, no. “I’m working on that,” Nelson says with a laugh, “as we speak.”