Nick Patch stood at the helm of an open-air workshop at Lake Champlain Maritime Museum in July and surveyed 10 sea kayaks, all in skeletal form. Campers, ages 13 to 17, used handsaws, epoxy and clamps as they constructed the boats. Two days earlier, the crafts were just piles of wood. Now they looked like kayaks.

Most of the teens said they had minimal experience building anything — much less their own boat — when they signed up for Champlain Discovery, the Vergennes museum's five-week summer sea kayak program. Campers spend the first three weeks building their kayaks. Then they have the option of putting their boats in the water for a two-week, 180-mile expedition on Lake Champlain.

Patch, the 67-year-old director of maritime programs at the museum, had known of a boatbuilding program in Maine before starting this one in 1994. As the first three weeks wind down, he said, the kayaks "come alive with individual builders' personalities" as the teens customize their boats with paint designs and themes. The best part: Campers get to keep their creations.

"I didn't make a conscious decision to be an educator," Patch said. "But my drive came from the fact that I was not a good [classroom] learner myself ... College really wasn't a good fit for me. I'm just a hands-on learner."

In the early 1990s, Patch, a Ferrisburgh resident, ran a boat repair and restoration business in Shelburne and Charlotte while also working at the maritime museum. But around 1997, he decided "to go for broke," he said, and he sold his boat repair business to dive full time into teaching at the museum.

He pitched another idea to the museum: building traditional rowing gigs, large wooden rowboats, with middle and high school students and then using those boats in community programs. In 1999, Patch led the first group of students — a Vergennes middle school class — as they built a gig together.

"We pretty much have been on a trajectory to build one boat a year since 1999," Patch said. The boats range between 25 and 32 feet in length and hold six to eight people. "This boat right here, Sugar Moon, was our 23rd build," he said, gesturing to a yellow vessel built using a traditional whaling boat design. More than 20 kids spent nine months constructing the boat with Patch and maritime museum educator Jack Chappell. They completed it last May.

The public school-based boatbuilding program originally lasted six months, but, as of last year, it runs throughout the entire school year. Participants have come primarily from Middlebury Union High School and the Addison Wayfinder Experience, a special education program based at Vergennes Union High School that serves multiple districts in Addison County. Vergennes students come in the morning, and Middlebury students come in the afternoon; all work on the same long boat. The students also help maintain the entire gig fleet.

"This boat, Sugar Moon, has approximately 3,000 rivets in it, all hand-pounded, so a lot of handwork is involved. Every plank is individually fit," Patch said. "By the end of the project, I would say, everybody's pretty bought in and pretty proud."

The process begins when the students set up a strongback, a length of timber used to hold the keel in alignment during construction. The keel and keel plank are set into the strongback, along with a series of molds to define the shape of the hull. Students lay the planks around that structure. Then it's time to steam-bend ribs into place. Students pull eight-foot-long strips of oak out of a 192-degree steam box and "bend them to a radical shape," which, Patch said, is "a very magical process."

Lastly, they install foot stretchers and seats in the rigs.

"We build them right side up, which is not something everybody does. It's a more accessible process and looks more like a boat coming together, which is motivating," Patch said.

The group also takes a field trip each winter, trekking into the woods with regional forester David Brynn, who runs Vermont Family Forests, to locate trees that can be used for future boatbuilding. This past winter, they watched loggers fell a tree, which arrived at the museum in log form. In the spring, the museum brought in a portable sawmill, and students helped cut the log into usable dimensions. The lumber then dries for at least a year in the museum's drying shed. Though additional timber comes from other sources, such as Canopy Timber Alternatives in East Middlebury, Patch recognizes the value of teaching tree harvesting.

"We're pretty proud that we have an experience that goes from tree to boat," Patch said.

In late May or early June, the young boatbuilders celebrate the boat launch in dramatic fashion. Musicians play, and each teen speaks about their building experience to an audience of 50 to 100 people. The students parade down to the boat ramp at Basin Harbor resort and celebrate with a boat-naming and the launch. Students submit name ideas in a suggestion box, then vote online. Some years, donors who support the program get to choose the name, so there's no competition.

"I think there's a lot of power in working with a community of people on a project and really creating something tangible and useful. It's really hard to get that in a classroom," Patch said. 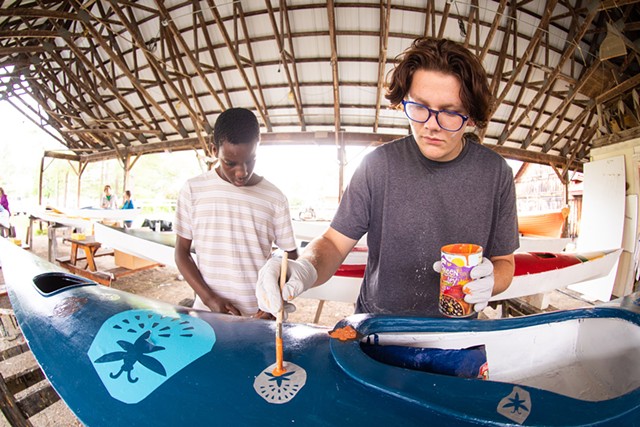 Museum instructors pride themselves on the fact that every boat they've built since 1999 is currently in use, Patch said. Eight Chittenden and Addison county schools participate in competitive rowing afterschool programs that serve hundreds of kids annually. The museum also offers school-based ecology programs, through which students go out in boats to capture plankton and other specimens to examine under a microscope. The boats also get used for expeditionary programming, an adult rowing program, and one-off team-building activities for kids and adults. And the museum supplies boats when it collaborates with nonprofit Project HOePpnEr to sponsor an event designed to prevent and raise awareness of teen suicide.

"There's a lot of tentacles that reach a lot of different communities," Patch said.

The school-year boatbuilding program is free through public schools. The museum offers a pay-what-you-can model for all of its summer camps, including the kayak-building camp, as well as its year-round expeditionary programs. Patch said longboats they've built are displayed at Addison County Fair & Field Days in August. When the kids recognize a boat they've helped build, their reaction is priceless.

"They'll say, 'That's my boat!' And it really warms your heart," Patch said. "They clearly are proud of it, and they get inside it, and they show it to whoever they're with. It's the kind of ownership of an accomplishment."

Back in the open-air workshop on the final days of the summer kayak-building camp, the boats were popping with personality and color. Basil Hopkinson, 17, of Bridport had painted fireflies on their boat with the help of fellow camper Jonathan Kafumbe, 13, of Middlebury.

"At my house, we have this really big, open field, and at night we have hundreds and hundreds of fireflies, so I wanted to do that on my boat. Me and my mom made these stencils last night," Basil said. 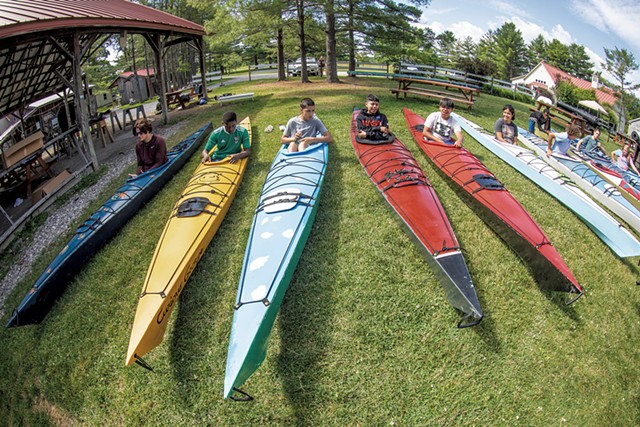 Reed Grant, 14, of Vergennes was splattering paint in a Jackson Pollock fashion onto his boat, an idea that came from Hopkinson. Grant signed his boat with a green handprint.

Laela Desjadon, 13, of Vergennes had created a SpongeBob SquarePants theme on her boat, and Joshua Kafumbe, 15, of Middlebury was cutting out a Curious George image with an X-Acto knife to stencil onto his yellow kayak.

One of the quotes hanging on the wall inside the longboat workshop building says, "A boat should live three times the life of the tree it was built from."