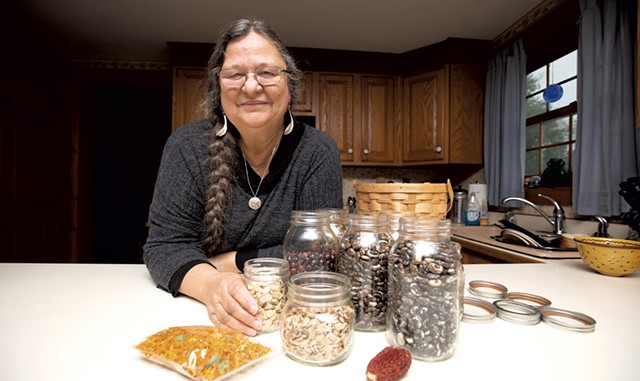 A few years ago, educator Judy Dow contemplated retiring. She'd been an educator for more than three decades, working at Essex Elementary School for 15 years and later teaching at the Chittenden Country Correctional Facility. She'd received the Governor's Award for Outstanding Vermont Educator in 2004.

Instead, Dow, a scholar of French Canadian and Indigenous descent, chose a different path: She became the executive director of Gedakina, a multigenerational organization that supports Indigenous youth, women and families across New England. Gedakina helps reclaim and preserve cultural traditions, such as gardening, basketry and beading.

In her role, Dow travels to reservations and schools across the region. She teaches classes primarily about climate change and the history of the now-discredited eugenics movement, which once sought to sterilize Indigenous people, French Canadians and those who were poor or disabled. One day she might be discussing the subject with fourth graders, the next with professors from Harvard University. Last year, she connected with 7,636 young people ranging from preschool to college age over Zoom.

This fall, she's resumed in-person workshops. On a weekday in October, she taught three groups of fifth graders under an outdoor tent at Champlain Elementary School in Burlington.

Dow stood in the center of the students' encircled chairs, looking at posters that each team created to tell a story about climate change. One group showed images of Bicknell's thrush birds next to a list of facts.

Another group held up a poster about how logging is pushing out the forest's animals.

Dow helped them see the deeper meaning in their work. "So I think the key words from your lesson is: We need to find balance in understanding what is a want and what is a need," Dow told the class. "We don't need everything. We may want it, but we don't need it."

In other words, echoed a student, "If you don't have to, don't."

Champlain Elementary received a grant from the Vermont Arts Council to bring Dow in as a special guest, teaching fifth-grade students weekly lessons for six weeks. Her lessons cover climate change and art while teaching students how they can apply what they're learning to their own lives.

Her visits are designed to meet new state standards for learning about Indigenous culture.

Gedakina also distributes books to schools, especially those struggling with racial issues or controversial mascots, to help them become closer to understanding Indigenous points of view and Indigenous stories.

There are many ways to tell those stories.

Last spring, for example, Dow created an anti-eugenics tapestry called 'The Witness Tree' to mark the 100th anniversary of the Second International Eugenics Congress, which promoted eugenics. Her work has been traveling around the world this fall with an international anti-eugenics forum. She was one of the historians the State of Vermont asked to help write the eugenics apology letter passed this year by the Vermont House and Senate. 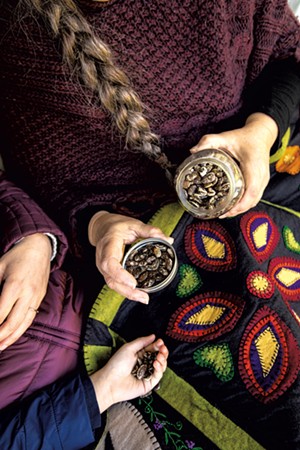 During the lesson at Champlain Elementary, she told the students about another storytelling technique. "Do you know what a 'sit spot' is?" she asked. It's a place where you sit all the time and watch the world around you, she explained.

"I want to record that story so that I can remember everything that I saw in my sit spot," said Dow, as she held up a gourd punctured with holes. She told the students that she bored a hole for each plant and insect she saw from her sit spot. When she puts an LED light inside, it creates a night-light effect reminding her of what she saw. She held up more examples: a quilt depicting the story of spring in her backyard; another quilt dedicated to the 1918 Migratory Bird Treaty Act.

"We all have a story to tell. We've been working on climate change, drought, fire, flooding, the immigration of people, the emigration of animals," said Dow. "Now we're going to take the story from your poster and create another map to tell that story."

She passed out yogurt containers to show the students how to make baskets. She cut the sides into quarters, weaving math and French lessons into her demonstration. "You want to cut each fourth in half again," she said. "So, what will I have?" Eighths, the kids yelled.

Dow's own story began in Burlington's North End. Each year, she attended public school there from "Columbus Day weekend — now Indigenous Peoples' Day — to April vacation," she said in an interview after the Champlain Elementary workshop. For the rest of the year, her family, which included her mother, father and four younger sisters, moved out to South Hero and lived on a dead-end dirt road near her aunts, uncles, grandparents and cousins. Her family, who spoke French around the house, fished for their dinner and grew all the food they needed in huge gardens. Canning and freezing were a big part of her childhood. Her mother would always make two pies — one to eat and one to freeze for winter.

Dow grew up mostly outside and had to be home "when the sun reached the top of the cedars," which was about four o'clock.

She spent a lot of time exploring. In the winter, she ice skated from Burlington to South Hero. "It was a regular thing for me," she said. "And in the summer, it was nothing to take my little sunflower sailboat and canoe around the islands and over to New York. Those experiences have allowed me to explore history and the environment and all of the things that people learn in books."

But while she was free to wander, she was also bound by stereotypes of Francophone and Indigenous peoples. "Because of the treatment of the Francos and the Abenaki in Vermont during my parents' time, I was raised to learn to care for myself," said Dow.

Stories helped her navigate that challenge, too. Her grandfather and father would reread her older tales written by Daniel Trombley about a fictional character called Batiste Parvenu. Dow described the series as being about a "bumbling idiot" who got into trouble and was published during the periods of prohibition and eugenics in Vermont.

"Francos got together in the evening to decode his stories, because there were messages on how to protect yourself," said Dow. "At nighttime, when most children were having fairy tales read to them, we had Batiste Parvenu stories read to us, and we were taught to decode them."

Dow wanted to learn to teach, too. She earned an undergraduate degree in native studies from Burlington College and another in education from the Community College of Vermont, as well as a graduate degree in teaching for social justice from Marlboro College.

Another experience that informed her work: becoming a grandmother. It's partly what motivated her to speak out about eugenics. Two of her three grandchildren live next door and visit regularly. Together, they recently ground corn to make cornmeal for baking. Then they made a quart of seeds to give to farms that Gedakina supports for next year's gardens.

"I felt my life was complete when I became a grandmother," said Dow, 67. "I think some of that gets rubbed off into what I'm doing with the students. I could possibly be grandmothering them, as well. I'm not sure. I think I might be."

"I love how Judy teaches kids to think in a totally different way," she said. Malik pointed out that her school recently attended the John Dewey Memorial Conference at the University of Vermont. At the conference, someone posed the question: "Who is your school's most impactful special guest?" Three separate people named Dow, including fifth-grader Aria Leff.

"She's really taught us about different ways to learn about climate change — like using art and how we really need to take action now and not just wait for other people to do it," Leff said.

Part of the lesson is that students need to pass on what they've learned. During the workshop at Champlain Elementary, Dow explained how the baskets that students were making would help them remember their stories.

The following week, the students were scheduled to teach college students from UVM how to tell a story in a basket.

"Think about how full circle this is," said Dow. "First you see, then you hear, then you remember. To reinforce it, you have to share."

The original print version of this article was headlined "Judy Dow, Indigenous Scholar"