As the community engagement director for Burlington-based Outright Vermont, Emma Makdessi works with youth who identify as lesbian, gay, bisexual, transgender or questioning and their allies. The nonprofit organization hosts weekly peer-support groups; provides workshops, education and training for schools and colleges; and organizes annual events like the Queer & Allied Youth Summit.

But one of Makdessi's favorite parts of her job is putting on Camp Outright. Every summer since 2011, Outright Vermont has run a weeklong residential summer camp for LGBTQ+ youth and allies ages 13 to 17, held at the Common Ground Center in Starksboro; Makdessi is a codirector. The camp is one of 16 such camps recommended by PFLAG, a national organization for LGBTQ+ youth, their parents and families. Campers and staff come from all over the state and country.

Makdessi first got involved with Outright through camp; she started there as a counselor in 2013, then returned the next two summers as the codirector. When COVID-19 struck, Makdessi was working full time at an LGBTQ+ organization in Florida; she reconnected with Camp Outright as a remote contractor to help implement its virtual 2020 summer program. At the beginning of 2021, she moved to Burlington and joined the year-round Outright Vermont staff.

This year, for the first time, Camp Outright hosted two one-week sessions of 50 campers each, rather than a single session for 75 campers. And it piloted a new partnership with the University of Vermont Medical Center that allowed residents to receive credit while offering medical support at the camp.

What follows are quotes distilled from a conversation with Makdessi during the second session of camp.

On watching the evolution of Camp Outright

The first time I came to Camp Outright as a counselor, I was just blown away. When my friend told me there was a queer camp, I didn't believe her. I was like, No, that doesn't exist. And it did. My first summer as a counselor, back in 2013, my mind was blown, and I just fell in love. It was still very new. It's exciting to be part of a baby camp, as I like to call it, because you still have so much time to shape the culture and create the traditions and make it be what you envision this "queertopia" to be.

This week, we're focusing on power and resilience. We have small-group discussions. Yesterday, we talked about a spectrum of power. Do you feel powerless in your school? Do you feel powerful in your school? We want queer youth to find that resilience in their identity, resilience in their community, but also to understand that different folks hold power. How do we change the system? How do we navigate power?

On what makes Camp Outright unique 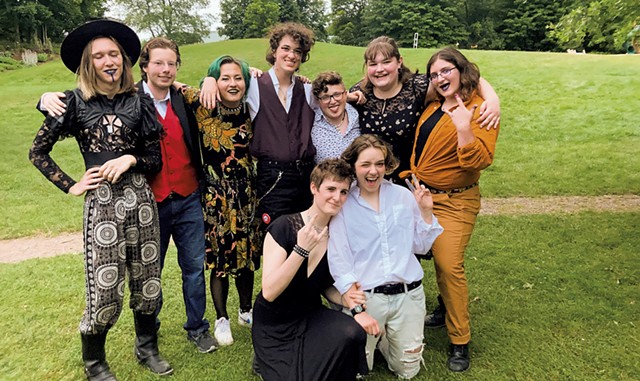 We have different cabin options. We have a transfemme or femme-identified cabin, a transmasculine or a masculine-identified cabin, a nonbinary or a gender-liberated cabin. Campers get to decide where they want to go. Our staff reflects our campers, so we have staff in the cabins that reflect all the identities. We have names and pronouns on all the name tags.

There's a lot of downtime here, and soul time. We have licensed mental health professionals on-site to talk to the youth at any moment that they need it.

Our workshop blocks include kickball, queer sex ed, tie-dye and friendship bracelet-making. There's always a queer twist, and that's what makes Camp Outright so different than a lot of other camps. Tonight is our talent show. Last night was our fashion show. Those evening activities really bring campers together.

We have the closet where we bring anything from T-shirts to dresses. If campers find something they like, they can take it home. It's youth coming out of our closet space and feeling really affirmed in their gender presentation and their gender identity and who they are as a person. It's a camper running up and saying, "Hey, everyone, I just got my first [chest] binder."

For the fashion show, they dress up their counselor. We emphasize consent here. Is this going to be comfortable for your counselor? Have you asked them if it's OK for you to put makeup on them or wear this outfit? We've set up our dining hall with lights and a speaker system. We have a panel of judges and chairs around the runway. One by one, the cabin counselors get announced. You walk the runway with confidence and with flair. You're at camp! And you're at queer camp. So, you get silly, and you get out of your shell, and you show campers that you're in this, too. You're here. You're queer. And you're sticking around. This is the time to have a blast.

On staff modeling that glow

Last night, a camper was talking about how the staff is so nice to each other. This is a place where what the youth see are queer adults who are just filled with queer joy. One of the biggest takeaways is: You can be happy in your identity and who you are in your queerness, because here's a community of folks who are modeling what that looks like.

When we interview staff, they say, "I wish I had something like this when I was younger." And I fall right into that. I wish I had something like this, because I would be a much different person. It's creating what a lot of us didn't get to have when we were growing up, and discovering our identity, and trying to figure out what's going on with our body and our sexuality, and how we want to present. It's creating a summer camp that is like no other.