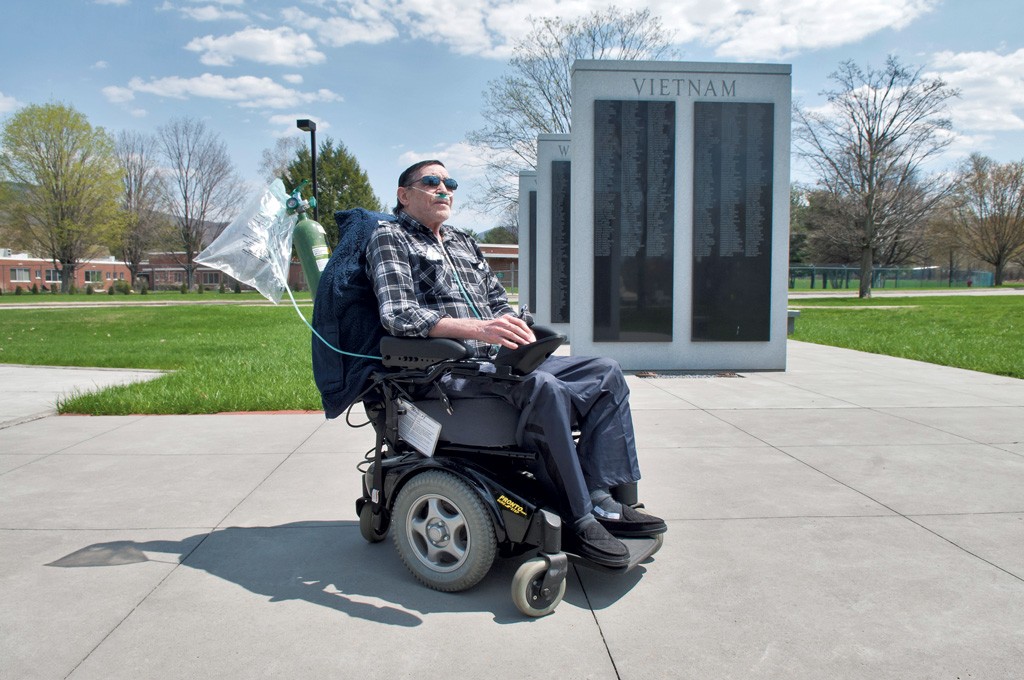 Parked outside a gray clapboard house in Pawlet Village, the green Korean War-era jeep was a dead giveaway. "Come on in," Steve Leach called out to a reporter. The bearded 61-year-old Army veteran led the way through a foyer adorned with rifles, sabers and canteens and past a mannequin wearing an infantry uniform. In the sitting room, military banners hung over the windows, blocking most of the late-afternoon light.

Leach settled into a big armchair. "I'm nervous," he confessed, explaining he didn't want to say anything that would adversely impact the Vermont Veterans' Home — the subject of our interview. His father, a World War II veteran, spent his final days at the Bennington facility, as did many of his uncles and cousins.

A former state commander of the Veterans of Foreign Wars and now chair of its Veterans Home Committee, Leach is worried about the state's relationship to this special nursing home that serves veterans of military service, their spouses and "gold star" parents who've lost a son or daughter in the line of duty.

The state-owned facility, which has been around for more than a century, operates on $22 million a year. The money comes from Medicaid reimbursements, the federal Department of Veterans Affairs, a state appropriation and those residents who can afford to pay for their care. How much Vermont contributes has become a perennial subject of state budget discussions.

The legislature and the Shumlin administration have been working all winter to close a $113 million state budget gap. The state's financial crisis, which dates back to the Great Recession, has coincided with hard times at the home. VVH has lost $240,000 in federal funding since 2012 because inspectors found deficiencies in supervision and documentation. The facility remains on probation with the Centers for Medicare and Medicaid Services.

As the number of patients has dropped, so have VVH's revenues. The hospital has also failed to collect $1 million for medical care it provided but was never paid for. The combination accounts for the fact that VVH is requesting $5.89 million from the state for the upcoming budget year — $4.4 million more than in 2013.

Rep. Kitty Toll (D-Danville) noted correctly that VVH's state appropriation "has grown rapidly in such a short time," and she is the House Appropriations Committee member charged with making funding recommendations about the home to the full panel. "We can't afford an additional half million or a million each year," she warned.

In March, lawmakers suggested that the home could be privatized, sold or even closed. Neither the House nor the Senate budget bills recommends any of those scenarios, but the discussion sent a tremor through the veterans' community.

"We can't let go of this place," said Leach, a Vietnam-era vet who missed deployment to Southeast Asia but wound up disabled because of a back injury. "The state made a promise, and the state needs to keep the promise ... A vet should be able to expect to have a place to be taken care of when they can't take care of themselves."

Two members of the House committee overseeing military affairs prepared a memo for budget writers to explain the implications of privatizing or closing the home. It pointed out that the Department of Veterans Affairs would expect to be reimbursed $11 million for recent capital investments if the facility were to shut down. Pursuing privatization would take more than a year.

Rep. Mary Morrissey (R-Bennington) believes the memo swayed the panel's view, which is reflected in the House budget bill that provides the full $5.9 million requested. The same proposed legislation directs a working group to look at alternative ways to operate the home. By January, it's supposed to recommend how VVH could "achieve self-sustaining fiscal operation and require no additional state support by 2018." 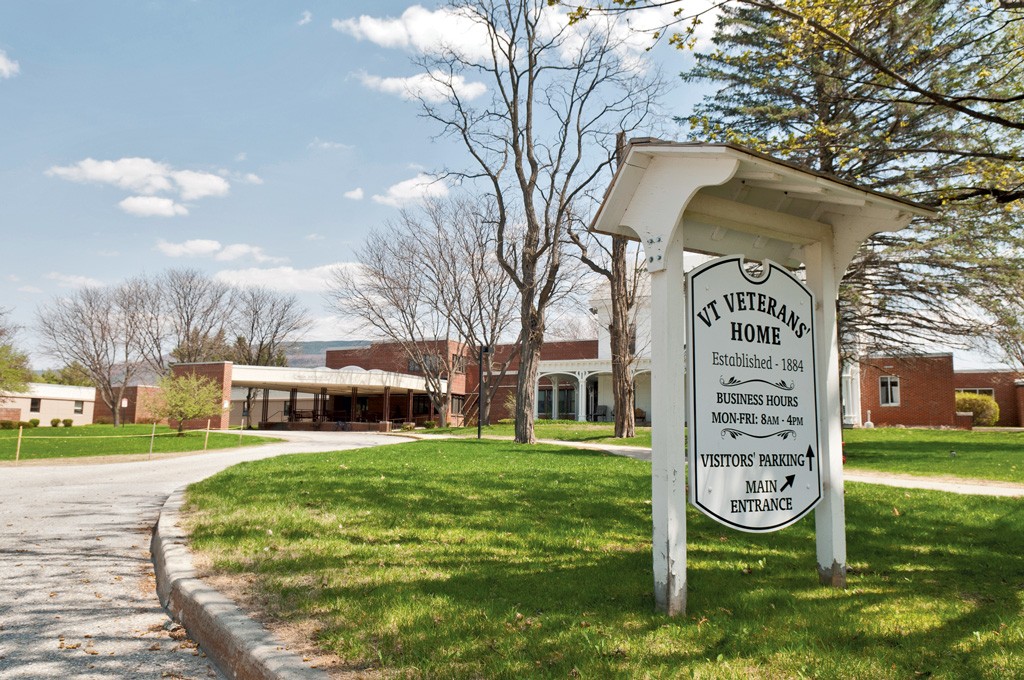 The study would be the third on the facility in as many years. In the first, a consultant hired by the Shumlin administration raised questions about the home's management-staff relations, the adequacy of its marketing and the financial expertise of its administrators. Last year, the secretary of administration produced a report for the legislature that recommended downsizing — that is, decreasing the number of beds to more accurately reflect the number of patients.

"It is the second oldest home in the country," said Joseph Krawczyk, president of the VVH's board of trustees. In 1884, it was the legislature's attempt to meet the needs of Civil War veterans. Lawmakers set up a board of trustees and appropriated $10,000. The home admitted its first resident in 1887.

Today, VVH is a sprawling brick structure with 196 staffers who provide care to 130 residents: 60 patients in two dementia units known as Freedom Village; 62 in the skilled-nursing wings; and eight in assisted care.

Until last fall, the home was licensed for 171 beds. "We saw the population decline. There was no way we were going to fill 171," said Krawczyk, a retired Army colonel and former Bennington legislator. In concert with the Shumlin administration's recommendation, the trustees voted last fall to reduce the number of licensed beds to 130. That saved about $200,000 a year. All nursing homes pay a bed tax to the state, whether the beds are occupied or empty. The money helps the state draw more federal dollars for health care.

With fewer licensed beds, administrators could cut the workforce. "We had 30 vacant positions we didn't fill," Krawczyk said. Thanks to two retirements, he said, "We only had to lay off three."

Administrators also tried to collect from residents who refused to pay for their treatment on grounds that vets should get free health care. While three-quarters of residents qualify for Medicaid, those with financial resources are expected to pay.

"I wrote a letter to them all," Krawczyk said. "I tell people there is no free lunch out there." In January, the home took a former resident to court, seeking $204,277 in unpaid bills. The court recently granted the facility an order of default after the veteran, Mark Greenberg, failed to respond to the lawsuit. VVH won the case but has yet to collect a dime.

Until that and other things change, VVH is running in the red.

CEO Melissa Jackson explained that Medicaid reimburses VVH $245 a day per resident, while patient costs average $425 a day. Even supplementary funds from the federal Department of Veterans Affairs can't close the gap.

Workers, most of whom are full-time unionized state employees, earn a lot of overtime, too. That's because there aren't part-timers to cover for their holidays, weekends, vacation, family and sick leave. While the home can't control the provisions of the union contract, Krawczyk emphasizes the positive: It's a stable workforce that, according to patient surveys, delivers high-quality care.

During a tour, Krawczyk introduced Jennie LaBrake, clinical care coordinator in an Alzheimer's unit. She was recently recognized for working there 24 years. "I just love the vets," she said, walking among the men hanging out at the nurses' station. "They have lots of history, lots of stories." She shrugged off Krawczyk's mention of her length of service, pointing across the hall to a colleague with nearly 30 years at the home. "The longevity tells you something," LaBrake said: "It is a good place."

Patient satisfaction matters to Krawczyk, in part because he has family at the home. In another wing, he saw his aunt, a resident, chatting with her daughter in a sunny sitting area overlooking a deck. Bottom line, he said, "In order to operate this home, we need some new revenue."

That's a tall order these days. The Shumlin administration proposed directing profits from the Vermont Lottery's new gaming consoles to the facility — but lawmakers and veterans objected.

Don Keelan, an Arlington accountant and retired Marine, publicly returned his Vermont National Defense medal — twice — over what he called "degrading" suggestions that gambling should become a source of funding. He argues that the state should prioritize support for the home — "$10 million, if that is what it takes."

Keelan's brother was a patient at VVH until his death. "He got great care," Keelan said. In his office, where a reception-room bookcase holds war volumes and military art, Keelan offered ideas to secure the facility's future. First, he said, the legislature and the board have to be able to answer questions such as: Will the demand for beds rise as Vietnam vets age, or will a home-care trend prevail?

Second: The home doesn't market itself. "They have one of the best Alzheimer's units around, and yet they don't promote it," he said.

Lastly, the free publicity is mostly bad, Keelan said: "When the legislature is debating whether to fund the place, what does this tell people who are thinking of coming here? Everything that is going on now creates a cloud, a dark cloud. That is the thing that really hurts the place."

Sen. Dick Sears (D-Bennington) agrees the home's future needs to be settled. "My goal is not to have this battle every year," he said. Sears sits on the Senate Appropriations Committee and won support from his colleagues to fully fund the facility and to take out the House provision about self-sufficiency by 2018. "There is going to be some state support," he said.

Back in Pawlet, Leach, who spent 20 years in the Army, was more specific: "It is the wish of the VFW that the Vermont Veterans' Home become a line item in the state budget."

Meanwhile, he's focused on spreading the word about the home to veterans and their families. That explains the jeep parked in front of his house. He planned to drive it to the VFW's 52nd Annual Loyalty Day Parade last Sunday in Rutland to promote the vet's home.

"There is no place like home, but that place is as close to home as there is," Leach said. He added, "I'm probably five years from going there myself."