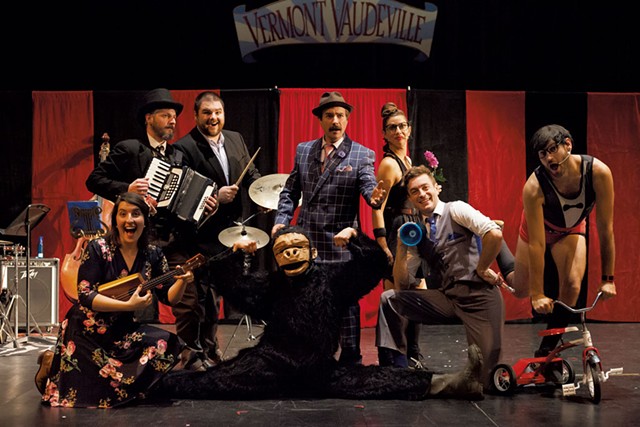 This weekend a Vermont institution celebrates a milestone: Greensboro-based Vermont Vaudeville, 2018 winner of the Seven Daysies award for best comedy troupe, will perform its 20th show at the Hardwick Town House.

Those who've never seen a Vermont Vaudeville show should know that Vermont Vaudeville: 10 Years Later is an evening of mayhem, tricks and tomfoolery from a core cast of six people and one gorilla. If you're asking yourself what a gorilla is doing in the Northeast Kingdom, well, there's no way to know without seeing for yourself.

Founded in 2008, Vermont Vaudeville takes pleasure in the unexpected, with performances designed to disrupt the mundane, defy the logical and relish in the absurd. The troupe harnesses the formidable skill sets of its cast — who have toured the world as clowns, jugglers, dancers, puppeteers and more — and partners with guest artists.

Since Vermont Vaudeville first hit the stage in 2009, it has produced one to three shows annually; its events have grown from a one-night performance with an audience of about 100 to a three-night run seen by nearly 1,500. To appease the growing crowds, the troupe has partnered this year with Miso Hungry food truck, which offers Japanese ramen, and Red Sky Trading of Glover, which will serve popcorn, cider and baked goods.

"We've never had a repeat guest entertainer in Hardwick, and every show that we put on is brand-new variety," says McCoy. So those who think they've seen a Vermont Vaudeville show may need to think again.

One highlight among the guest artists this year is the Red Trouser Show, composed of Circus Smirkus alumni David Graham and Tobin Renwick, who are debuting a magic trick that McCoy describes as "quite something." Saxophonist Ron Kelley and percussionist Greg Jukes will provide the soundscape for the show, which McCoy describes as "the opposite of canned music and pop songs."

One guest performer, Dr. Professor Alonzo Nonnamis — Miracle Man, is such a big deal that he's performing under a pseudonym. According to Vermont Vaudeville founding member Rose Friedman, he regularly sells out opera houses in Europe but is appearing in the 300-seat Hardwick Town House purely for the fun of it.

"Even though we can't pay him what an opera house might," says Friedman, "artists regard Vermont Vaudeville as a really rewarding experience. Our audience doesn't always get access to this kind of entertainment and are very appreciative."

Also new to the show is the winner of Vermont Vaudeville's inaugural Who Wants to Be a Vaudevillianaire? talent competition for amateur acts from the Northeast Kingdom. On Saturday, two acts tied for the guest star position: Gabriel Roberts of Craftsbury for his "Yoga With Dan Keene"; and Eva Goodwin and Ezra Schenck, two teenagers with more than a decade of dance training between them, who created a piece called "Harlequinade: A Ballet Duet."

While it may seem risky to toss an amateur act into the show a few days before opening night, the self-described "grassroots theater company" encourages audiences to "laugh locally." Members describe fostering the next generation of vaudeville acts as central to their mission.

Vermont Vaudeville works to ensure the art form's future in the NEK by participating in the restoration of the Hardwick Town House. McCoy reminisces: "If we could take you back in time to when we provided our own homemade lights, and there were no curtains of any kind, and there was paint peeling on the walls..." All four founding members of Vermont Vaudeville serve on the Hardwick Town House board, and they solicit donations for the venue at the start of each performance. To date, they've raised more than $10,000. Their in-kind contributions, while essential to the success of their shows, also benefit anyone who uses the space. McCoy says, "The crown jewel of this whole project is that this historic building has found new life."

Vermont Vaudeville also brings new audiences to the venue; schools all over New England bus kids to the shows. When asked about the educational value of these vaudeville field trips, McCoy waxes philosophical: "The emphasis is actually on fun. Yeah, we are dedicated to the preservation of live entertainment as an art form in the digital age, and I'm sure that has educational value, but we believe there is cultural value to doing this. There's inspiration potential when you bring 300 students together who don't know each other just to have fun with live entertainers.

"Some of these kids may have otherwise never seen a live show, or a juggler, or a clown," McCoy continues. "Hopefully, this experience will stick with them for a long time, like it did for us." So says the kid who grew up to clown around professionally.

Vermont Vaudeville has no plans to call it quits after its first decade. "We've developed a relationship with the audience," Friedman says. "They are tremendous people, and it's not just one slice of the community that comes. Everybody feels like they can come, and they do. I don't want to let that go anytime soon."