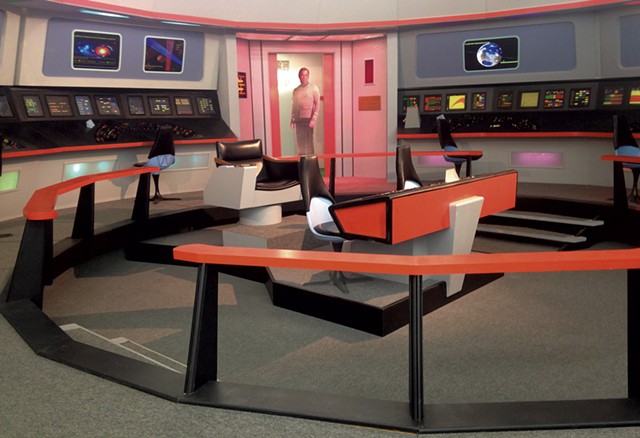 Seven Days' September 9 story "Beaming There" covered the launch of Trekonderoga, a first-ever "Star Trek" convention held in Ticonderoga, N.Y. The three-day event, hosted in the town's Retro Film Studios, was the brainchild of James Cawley, a 48-year-old Ticonderoga native and diehard Trekkie.

Over the past decade, Cawley recreated the entire film set of the USS Enterprise in meticulous detail, using blueprints from the original 1960s TV series. He and his friends then began filming new studio-quality episodes of their homage to the series — "Star Trek: New Voyages" — featuring such classic characters as Captain Kirk, Mr. Spock and Dr. McCoy. Those episodes, in which some of the original cast members have appeared, are posted online for free viewing.

After that article appeared, we learned that some Vermont Trekkies are getting in on the act. They're preparing to shoot their own "Star Trek" spinoff, sometimes using Cawley's sets for their productions. James Bray, a 53-year-old retired set designer from Highgate Springs, is the chief executive producer and creator of "Star Trek Anthology," a planned collection of three separate series based on the "Star Trek" universe created by the show's founder, Gene Roddenberry.

The first series, titled "Starship Challenger," features a character who appeared in the 1965 "Star Trek" pilot, "The Cage": Yeoman J.M. Colt. In "Starship Challenger," Colt is grown up and commands her own starship. She's played by Bray's wife, Jodi Ballinger Bray, who bears an uncanny resemblance to actress Laurel Goodwin, who portrayed Colt in '65.

The second series, titled "Mother," revolves around a family that operates a freighter on the outer fringes of the galaxy. As Bray explains, the story focuses on a father and his two kids, both of whom are autistic. Portraying them are the Brays' 17-year-old son, who plays a high-functioning computer geek; and 16-year-old daughter, who pilots the ship. Both are themselves on the autism spectrum.

The third leg of "Star Trek Anthology" is titled "Assignment: Earth." Based on the final episode of "Star Trek"'s second season, it involves time travelers and interstellar agents.

Neither of the Brays are newcomers to theatrical productions. For years, they owned and operated a successful theater company in Starke, Fla., called Stage Door Productions. James Bray also spent more than 20 years designing sets and props for Disney and Universal, and has worked as a set designer for Vermont's Lyric Theatre Company.

Bray says that meeting Cawley was "kismet." About five years ago, Bray was helping some fellow Trekkies rebuild another fan-based "Star Trek" set in Oklahoma City. Most fan-based productions, like Cawley's and Bray's, are accomplished using volunteers, donated materials and cash gifts. When the Oklahoma group posted an online request for material to make uniforms, Cawley offered to donate costume fabric he'd acquired from the original TV series. Bray drove from Vermont to New York to pick it up.

Bray recalls arriving at Cawley's studio while the latter's crew was shooting pickup shots that required Klingon makeup. When Cawley's makeup artist "pulled a no-show," Bray, who was familiar with the makeup, offered to help — then spent the rest of the afternoon making Klingon foreheads.

"I've been playing with James ever since," Bray says. "We have a ball."

As "Star Trek Anthology" begins filming in April, Bray says he's still looking for volunteers, including a director of photography, production assistants and a few good makeup artists. "A wealthy benefactor or two wouldn't be bad, too," he adds.