Among many other losses, the pandemic resulted in darkened stages and empty theater seats. But that, of course, is not the whole story: Thespians, like other performing artists, have found ways to keep on acting out. Even in the dead of winter, we have much theater news to report. So let the virtual curtain rise...

In addition to its monthly interactive play reading/discussion series, the American Dream Project, Middlebury Acting Company introduces something new this week. For its filmed anthology Flash Forward: Voices From the Future, the company called on authors as well as actors, directors and a musician. MACo's artistic director, Melissa Lourie, invited eight Vermont writers to contribute a five-minute monologue, set between 2030 and 2050. Then, she said, "Mostly I decided who would be a good actor and director" for each piece.

Naturally, a writer's gonna write, so Lourie allowed that "we had to cut the heck out of" some of the monologues to fit the five-minute format. Middlebury College senior Fayza Shammin shot each monologue; music professor and composer Peter Hamlin scored them and wove them together. In the end, Lourie said, "I think the directors did a great job of making [the monologues] suitable for a visual medium."

A few samples: In "Audition," written by Marianne DiMascio, an actress (Susan Palmer) has her first audition for a live performance after 11 years of pandemic. Kathryn Blume directed. Chris Bohjalian wrote "One Day Pin," about a young woman confessing her reasons for returning to AA meetings. His daughter, Grace Experience, performed it; Kate Redway directed. In Robert Cohen's "The Trials of Jared K.," the former president's son-in-law pleads for his life "before a Kafka-esque court he cannot see." John Nagle played Jared Kushner; Jena Necrason directed.

"It's a stroke of luck that they're all so different," Lourie said of the monologues. "And not too dark. I didn't want to bum people out."

A YouTube link for Flash Forward will be available on the MACo and Town Hall Theater websites.

An outreach program of Randolph's Chandler Center for the Arts, Vermont Pride Theater is also looking to the future — and coming to an end. That is, this week's virtual staged reading of David Valdes' Raggedy And is the group's final production after a 10-year run. And a highly successful decade it has been.

The nonprofit's leadership initially had some trepidation about focusing on LGBTQ issues, board member Sharon Rives acknowledged, but "it really has turned out to be a very positive thing." People have stopped her on the street, she said, to tell her that, before Vermont Pride Theater, they couldn't even talk about a relative who happened to be gay. "We have learned that theater is a powerful tool for changing minds and hearts, especially when there are talkback opportunities after each production," Rives said.

2019's production of Standing in This Place: Growing Up LGBTQ in Rural Vermont, by Maura Campbell, "hit the bull's eye," Bennett Law said. He's the cofounder of the Gay & Lesbian Fund of Vermont and a member of the Chandler's Vermont Pride Theater committee. "While LGBTQ issues are still important, other matters are also — Black Lives Matter, the immigrant experience in Vermont, what it's like to be Black in Vermont," he said.

Law and Rives concur that the Chandler will be broadening its mission "to several foci needing attention in Vermont today," as Rives put it.

Meantime, the play Raggedy And — concerning a transgender poet invited to read at a presidential inauguration — has its own timely resonance. Vermont Pride Theater chose it before Amanda Gorman became an immediate sensation for reading her poem "The Hill We Climb" at President Joe Biden's inauguration.

The four-person play was written before the 2016 election, which Valdes expected would have a different outcome; he has since updated the work, Montpelier-based director Joanne Greenberg said. In fact, she revealed, she and Valdes were messaging each other during the inauguration. "So," Greenberg said, "he was updating [the play] as late as January 20, 2021."

Greenberg also directed Vermont Pride Theater's production of Raggedy And four years ago. "The thing I loved about this play, before and now, is the clash of viewpoints all four characters have — it's engaging and very funny," she said. "And Valdes is really evenhanded about presenting those conflicts." Now, that's a timely message.

A talkback will follow the premiere on February 6; the production will be available on demand through February 13. 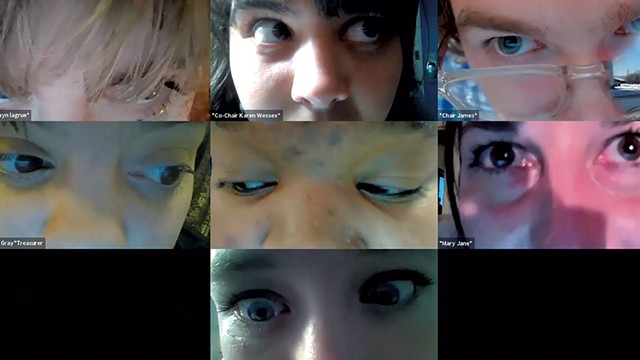 Isaac Littlejohn Eddy was part of the world-renowned Blue Man Group for 12 years, but on the Johnson campus of Northern Vermont University, he's got another claim to fame. Eddy developed the school's brand-new performance, arts and technology major, which offers au courant training not only in theater, music and dance but also in immersive design, social justice and activism. Now, in another first for NVU, Eddy has steered a batch of students to the college-theater regionals.

The Kennedy Center American College Theater Festival typically attracts some 18,000 students from campuses across the country. This year, like everything else in the world, the festival's performances and workshops were virtual. On Sunday, January 31, the NVU students were one of only three groups to present their show live. Well, sort of.

The students' play, The Monument, simulates a Zoom selectboard meeting in a fictional Vermont burg. It parodies the usual awkward tech issues, participants talking over one another, etc. One of the agenda items concerns a women's suffrage celebration (grounded in actual history) and a proposal to replace the local statue of a former Vermont governor who opposed women's right to vote. Hilarity — as well as mansplaining, small-town politics, feminist ardor and even some psychedelia — ensues.

The students developed their meta-meeting piece in a lab course under Eddy's tutelage. At the theater conference, instead of watching a prerecorded version of The Monument, the audience actually "attended" the faux selectboard meeting-cum-play. "We invited the conference to get on the Zoom call with us," Eddy said. The platform's polling feature allowed the audience to vote on the fate of the monument.

In the college theater festival's Region 1, which is composed of northeastern states, NVU was up against some much larger schools, Eddy noted; yet it was one of only 10 selected to perform. Though the Vermont crew didn't make it to the national competition, they got "a great response session," Eddy reported. "It was a great show!

"The whole Kennedy Center program is set up to nurture the theater makers of the future," he wrote in an email. "To have our show be a part of this is just exciting."

An edited version of The Monument can be viewed on YouTube. 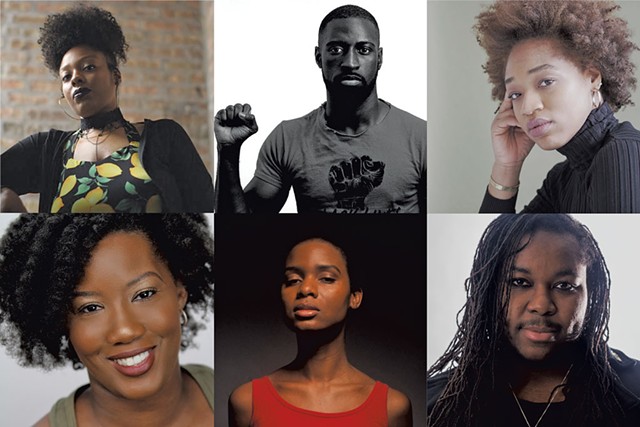 Lost Nation Theater presents a hybrid livestreamed-onstage production of the Jeanne Beckwith comedy Love Letters Made Easy on Friday, February 12, 7 p.m. It's available on demand through Sunday, February 14 — just the thing for Valentine's Day on the couch. Flying solo? Viewers can mingle, virtually, with performers after the show. Free, but donations are welcome. Preregister at lostnationtheater.org.

The fifth annual JAGfest, a festival of new works by Black artists that is normally held in White River Junction, this year presents a selection of radio plays about love. The prerecorded show will be available for streaming on Friday, February 19. Tickets and details at jagproductionsvt.com.

Lyric Theatre is seeking ideas for new performances and events in 2021, including potential collaborations with other arts organizations. Send suggestions to production selection chair Jane Harissis at vitsivan@aol.com.