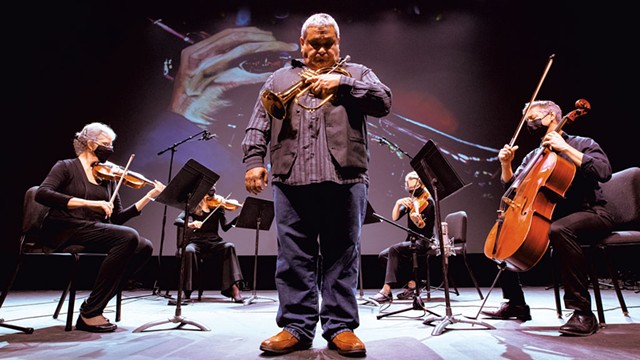 In the classical music world, it has been all too customary to characterize phenomenally talented mixed-race composers as lesser versions of white composers. Joseph Bologne, Chevalier de Saint-Georges (1745-1799) became known as the "Black Mozart"; Samuel Coleridge-Taylor (1875-1912) was dubbed "the African Mahler." Amazingly, these demeaning monikers live on today.

Clearly, a reckoning is needed, and the Vermont Symphony Orchestra is doing its part with a BIPOC-focused program for its final streamed concert of the season, on March 27. The event features compositions by Bologne, Coleridge-Taylor and seven other composers of color. One is Florence Price (1887-1953), whose compositions have seen renewed play since the discovery of a trove of them in an Illinois attic in 2009.

Simon's and Vega's pieces are both VSO commissions that will be receiving premieres. Simon used his commission to add a second and third movement to his 2020 work for string quartet about the Great Migration: "Warmth From Other Suns." Vega, a trumpet player, composed "Buscando Doña Juana Figueroa" for trumpet and string quartet in honor of his Puerto Rican grandmother.

There's much more than music in this final installment of "Music for Days Like This," the orchestra's pandemic series. Indeed, the VSO's official description of the prerecorded and edited video event suggests something of a sprawling beast, combining music, verse and visual art. Former Vermonter Reuben Jackson, who anchored Vermont Public Radio's "Friday Night Jazz" from 2012 to 2018, provides audio introductions to each poet, artist or composer. While he narrates, historical portraits and other images will fill the screen.

Former U.S. poet laureate Rita Dove has provided audio of herself reading two of her poems. Jackson, who published Scattered Clouds: New & Selected Poems in 2019, will read one of his, as well. Works by three Vermont BIPOC artists — Crystal Stokes of Worcester, Alan Blackwell of Brattleboro and Haitian-born Julio Desmont of Burlington — will be projected on a screen behind the musicians as they perform. (The performances were recorded at Essex Cinemas.)

"We've got so many artists involved — not just the musicians playing," said VSO executive director Elise Brunelle, who was hired in May 2020. The vision of a concert enhanced with art, poetry and narration is largely hers. Pulitzer Prize-winning Dove is an acquaintance of Brunelle's father's; Brunelle contacted the poet directly to ask her to read poems that "work thematically" with the music and art, she said.

VSO creative projects chair Matt LaRocca curated the music. Also curator of the VSO's Jukebox series, he regularly includes composers of color there. But he had to research from scratch at least one composer on the March 27 program, he said: Brazilian composer-conductor Chiquinha Gonzaga (1847-1935).

"I didn't really know her music before, but she is so cool," LaRocca enthused. "She's just a force of a woman."

Gonzaga, a prolific composer, was Brazil's first professional female conductor and an early practitioner and popularizer of choro, a style that blends European and North American influences such as polka, waltz and ragtime with Afro-Brazilian rhythms. LaRocca arranged two of Gonzaga's works for violin and piano: "Atraente" ("Attraction"), her best-known work; and "Amor." He also arranged "The Cascades," a piece by American composer and pianist Scott Joplin (1868-1917), for string octet.

Taylor's "Antsy," a 2020 composition for violin and viola, uses a relentless staccato beat to build a mood of twitchy alarm. (Lucia Kobza gives a riveting performance of the three-minute piece on YouTube, playing both instruments on a split screen.)

"The title, and the energy behind it, comes from the state of being I was in about two to three months into the pandemic shutdown," Taylor told Seven Days. "There was this sameness to everything, but something was also off and irritating and frustrating. The rhythms are consistent, but I'm changing the accents, so there's something that's not quite gelling about it."

Vega said his piece was born of the pandemic, too: "We've been disconnected from the world in so many ways, so you start looking inside." When his father died last April and Vega was about to turn 60, he began researching his ancestry online. Every search for his maternal grandmother "hit a wall," he said, leading him to guess that she might have been born out of wedlock.

"Buscando [searching for] Doña Juana Figueroa" combines elements of West African percussion music, tango and jazz great John Coltrane, Vega said. During the four-and-a-half-minute piece, he improvises on his trumpet over the strings. "I look at those sections of improv as I'm asking questions and not getting any answers," Vega explained.

With its exclusive focus on Black and brown composers, poets, and artists, the concert runs the risk of being seen as a heavy-handed effort to check the BIPOC box by a largely white organization in a largely white state. (All of the VSO musicians performing the program are white, as are Brunelle and the VSO staff.)

Jessie Montgomery is a Black violinist-composer whose music was performed in last month's streamed VSO Jukebox concert. Interviewed for an October 2020 New York Times article, she expressed skepticism at the sudden increase over the past year in orchestra programs featuring work by composers of color, including herself. "There's a real sense of people trying to save face," she commented.

Asked about this concern, Brunelle insisted that the concert is part of a larger effort. "The inclusion of BIPOC composers must be an ongoing part of any orchestra's repertoire choices," she said. "It does need to continue beyond the composers, of course; they're just one part of who we employ."

Brunelle noted that all four concerts VSO streamed from October through January included composers of color. The orchestra is currently hiring a music director to replace soon-to-retire Jaime Laredo; each of the seven candidates, Brunelle said, has been tasked with programming BIPOC composers for the concerts they will conduct as part of their audition. (Two candidates will conduct live concerts this year, beginning in October.)

"So, for us, it's not an incidental thing," Brunelle said. "It's an ongoing conversation."

Burlington artist Desmont, for one, is happy the conversation is happening. Desmont moved to Vermont from Haiti in 2018. His colorful, dynamic painting "Crescendo," a clean-lined abstract swirl, will be projected while the Joplin piece is played.

"There is good will to put this thing together, and me being part of it [is good]," Desmont said of the whole project. "I may not be able to see the big picture, but already I can feel something positive, that it will bring a positive outcome. It's all about good will."