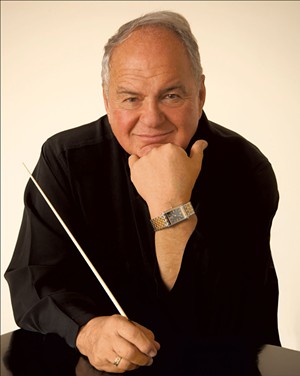 In a 2017 interview on the Violin Channel, renowned violinist and conductor Jaime Laredo was asked which side of him the public never sees. "I'm very cranky, and I'm very often in a terrible mood," he answered with a laugh. "Nobody ever sees that of me."

Indeed. As Laredo's 20-year tenure as music director of the Vermont Symphony Orchestra comes to an end this week, people around the state are remembering him as the nicest guy ever — as well as a beloved musician and mentor.

"He's so generous and so kind, and I think that vibe has become a part of who the orchestra is," said David Ludwig, who became the VSO's composer-in-residence in 2004 and is now the new-music adviser. "Orchestras often reflect their conductors, and this orchestra is a family."

Orchestra manager Eleanor Long, who joined the VSO as an oboist in 1974, offered a similar perspective. "I've heard about tension with music directors in other orchestras. Here, [VSO musicians] have found it an amazing experience because of [Jaime]," she said. "They want to do their best for him."

Realizing that the pandemic would prevent Laredo from conducting his final concerts scheduled for April 24 and 25, Long coordinated a farewell tribute that has chiefly consisted of flooding the music director with snail mail. The orchestra's 46 contracted musicians and other players were invited to write letters to him.

Characteristically, Laredo, who only recently started using email, has asked for their addresses to write each a thank-you note, Long said.

Laredo also received a copy of the Vermont legislature's joint resolution, offered by Rep. Sara Coffey (D-Guilford), honoring his career in Vermont, and a letter of congratulations from Gov. Phil Scott.

The VSO board of directors sent a commemorative plaque adorned with a baton, and the staff sent a huge bouquet of flowers. Second flute player Anne Janson created a photo book of all the musicians with mini bios, each of which ends with "Favorite Conductor: Jaime Laredo."

More photo books came from regional Friends of the VSO groups. One, from the Central Vermont Friends, includes odes to Laredo written by members and interspersed with photos of past programs and venues where he conducted.

Laredo had just received a Jaime Laredo bobblehead from the board when Seven Days reached him at his Cleveland residence last week. (He and his wife, cellist Sharon Robinson, have taught at the Cleveland Institute of Music since 2012 but consider Guilford their home.)

"It's the funniest thing I've ever seen," Laredo said of the bobblehead. "I tell you, I've been needing a lot of Kleenex lately."

According to Robinson, when the couple sat down to read a batch of letters the other day, both ended up "teary." It was moving "to know the difference he's made to so many people in our home state," she said.

Laredo, who will turn 80 on June 7, was appointed music director in 2000. At the time, he already knew Vermont well. He and Robinson were regulars at the Marlboro Music Festival and had purchased their nearby home in 1985.

Laredo even soloed in a violin concerto with the VSO in 1993. Long, the orchestra's unofficial historian, has a signed photo from that appearance on which Laredo wrote, "To the Vermont Symphony — What a pleasure it was to make music with you, and I look forward to many more times!"

"Little did he know then what the relationship would turn into!" Long joked.

By the time he took up the VSO baton, Laredo had been a star for years. A violin prodigy in his native Bolivia by age 6, he debuted with the San Francisco Symphony at age 11 and gained international recognition at 17 when he won the Queen Elisabeth Competition in Belgium.

Laredo studied under such musical greats as cellist Pablo Casals and conductor George Szell. In a phone conversation, he described Szell's conducting as his best training in the art.

Laredo appeared multiple times with the Cleveland Orchestra under Szell's baton, as well as with many other important orchestras, but has no formal training in conducting. He would go on to guest-conduct all over the world, and since 1993 he has conducted the New York String Orchestra Seminar at Carnegie Hall, a winter-break session for promising 16- to 23-year-old musicians.

In addition to the Cleveland Institute of Music, Laredo taught at the Curtis Institute of Music in Philadelphia for 35 years and Indiana University's Jacobs School of Music for seven years. Former students include current star violinists Leila Josefowicz, Hilary Hahn, Jennifer Koh and Bella Hristova.

"He's just about the most humble, gracious human being you'll ever meet." Sofia Hirsch tweet this

Laredo has collaborated with just about everybody in the classical stratosphere. An accomplished chamber musician, he played viola in a quartet with Isaac Stern, Yo-Yo Ma and Emanuel Ax for 15 years. In 1976, he cofounded the Kalichstein-Laredo-Robinson Trio with his wife and pianist Joseph Kalichstein; they still perform around the country, including as ensemble-in-residence at the John F. Kennedy Center for the Performing Arts.

Part of Laredo's legacy at the VSO is that he enticed many friends and former students to perform in Vermont.

"He brought so many artists that I doubt we would have been able to get," violinist Sofia Hirsch said — "stars like Peter Serkin, Yo-Yo Ma, Emanuel Ax, Leon Fleisher — twice — and André Watts. I don't know if they're all just like this normally, but with Jaime they were just such warm, generous musicians who treated us like a great orchestra."

"I will always be grateful for being able to play Brahms with Peter Serkin," principal cellist John Dunlop recalled. He added that Ma's appearance "would never have happened without Jaime being his friend."

Yet Laredo has never played up his fame.

"He's just about the most humble, gracious human being you'll ever meet," Hirsch said. "I never saw him make any attempt to show that he's a world-class violinist ... We have been — what would be the word? — unbelievably blessed to have the chance to work with him."

Musicians said that, as a conductor, Laredo was informed by a keen musicianship but was never demanding. As Dunlop put it, "He trusted the musicians, but he also had a clear idea of what he wanted. If he asked for something more than twice, then we got the idea that we really weren't getting it yet."

Ben Cadwallader, the VSO's former executive director — a role now filled by Elise Brunelle — credits Laredo with launching his career in music administration. Speaking from California, where he's now executive director of the Los Angeles Chamber Orchestra, Cadwallader recalled, "I was an intern for him while I was still on the path to being a professional oboist. He took me aside and said, 'You know, Ben, you're good at this, and in this industry we need people like you.' To have someone of Jaime's stature validate me in that way was literally life-changing for me."

Cadwallader remembered a postconcert dinner conversation at Burlington's Farmhouse Tap & Grill that illustrated Laredo's reach and humility alike. "We'd all get burgers — he loved the lamb burgers, and he'd have his Scotch — and a Frank Sinatra song came over the radio. And he just casually mentioned that Frank once invited Isaac Stern and him [and Robinson] over to his house, and it was such a weird experience.

"The whole table went quiet; someone dropped a fork. We said, 'You mean, Frank Sinatra?'

"The point of the story was not to name-drop," Cadwallader continued. "It was that Frank Sinatra was a curious artist — he wanted to understand the alchemy of making classical music. For Jaime, that was what was so special about the guy, that here's one of the greatest artists in history, and he still wants to learn."

The ending of his VSO tenure is "still sinking in," Laredo said. But he decided to step down for the orchestra's sake. "It's healthy for the orchestra to have a different view, something new. Twenty years is the maximum," he said.

Will Vermonters now get to see that cranky side of him — if it exists?

"That is really true," Robinson confirmed. "We call him the Grumpy Old Man." But, she added, Laredo shows that side only to her, their daughter, Jennifer, and occasionally Kalichstein.

Locals are likelier to witness more evidence of Laredo's well-known warmth and affection for Vermont. While the farewell concerts would have featured works by Ludwig and solo performances by his wife, Hristova, Laredo sounded almost grateful they weren't able to happen. "All I can say is, I'm so glad we're not in person, because I would have made a fool of myself and broken down," he said.

Vermont audiences will see Laredo again in guest appearances, though the conductor has sworn off any while the VSO is auditioning candidates for his job, a process that will resume in October. Meanwhile, fans can send him letters of their own via the VSO office, post memories on social media and contribute in his name to the orchestra's endowed fund for senior artistic leadership.

"It's important to know that everyone in this business knows and loves Jaime Laredo," Cadwallader said. "When I mention that I worked with the Vermont Symphony Orchestra, you'll see [people's] faces soften, their eyes light up: 'Oh, Jaime Laredo!' Having had him at the helm for so many years has been an incredible gift to Vermont."