Vermont Surveyors Map Out Ways to Attract Newcomers to Their Trade 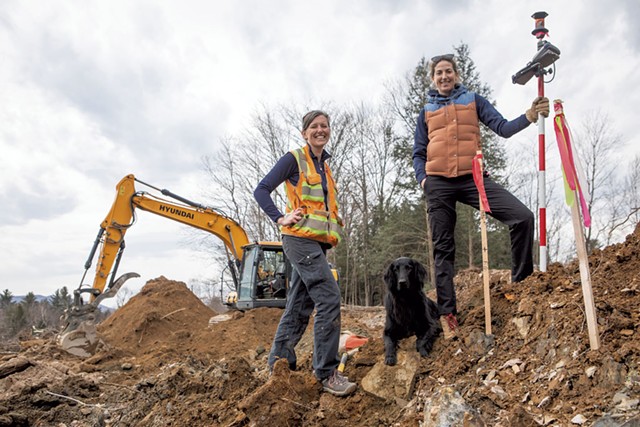 As he set up his instruments last month on a sunny dock on the shores of New Hampshire's Lake Winnipesaukee, land surveyor Randy Otis said he felt perfectly at home in his profession. He likes where it takes him.

"The real beauty of this work is, we're not stuck in a cubicle. We see some really cool places," said Otis, who is president of the Vermont Society of Land Surveyors.

While mapping out some lakeside property boundaries that day in March, Otis said he's not really a people person. He often works alone or with just one other person, and that part of the job appeals to him, too.

Those conditions don't seem to hold much allure for others, however. The surveying profession in Vermont, and in the rest of the world, is working hard to find more members.

Twenty years ago, the Vermont Society of Land Surveyors had 157 members. Now, according to administrator Kelly Cochrane-Collar, it has just 74. Many are retiring, and few people are moving in to take their places.

"They are 70 years old and working part time," Otis, 39, said of many of his colleagues. "One only works eight hours a week."

"It's a really well-balanced profession in that there's a little of everything — being inside, being outside, math, history, art." Rebecca Gilson tweet this

As professionals who create maps, surveyors use robotic instruments to establish or confirm precise boundary lines and other measurements that are vital to real estate development. They've become a prized commodity as Vermont undergoes a sharp increase in home construction. Todd Thomas, the planning director and zoning administrator in Morristown, said he used to get by on the work of retired surveyors who lived in Florida most of the year and returned to Vermont in the summer to pick up a few surveying jobs.

But home construction has taken off in Morristown, as in so many places.

"The gentlemen who did surveys in my office have all aged out or literally passed away," Thomas said.

He now relies on two contractors, which he said isn't enough. In 2010, when Thomas assumed his position, 10 homes were built. Last year, there were 146, and 400 are in the pipeline now, he said. There probably would be even more, Thomas suggested, if it weren't for the lack of surveying contractors. If one isn't available, his office can't process permits and developers can't get final plat approval on subdivisions.

"It gums up the entire works," Thomas said.

The need for surveyors didn't develop along with subdivisions in the modern era. Surveyors like to note that their profession has been around since ancient times.

It's surveyors who were behind the construction of the pyramids in Egypt and other notable projects through the eons, according to getkidsintosurvey.com, a slickly produced website that promotes the profession to children through posters, comic books and other attractions. The campaign is based in England, with representatives in Australia and Maryland promoting the profession, demonstrating the breadth of the need.

There are more efforts under way to draw in math-loving youngsters. Among other things, the National Society of Professional Surveyors promotes a Boy Scouts merit badge in surveying.

In Vermont, the state society has hosted an annual exhibit at the now-defunct Vermont History Expo and appeared at middle school and high school job fairs. This summer, its members will offer hands-on demonstrations through the Vermont Historical Society as part of a project highlighting James Wilson, a cartographer who lived in Bradford. Wilson, who started farming around 1810, is credited with being the first American to make a globe.

Land surveyors typically make around $65,000 a year, according to the U.S. Bureau of Labor Statistics. But other professions are also seeking smart go-getters, and the competition is keen.

Some surveyors blame the local shortage on the fact that no Green Mountain State school has offered a degree in surveying since Vermont Technical College stopped teaching those courses decades ago. The University of New Hampshire's surveying and mapping program ceased taking new students in 2018. And in the New York Adirondacks, Paul Smith's College, which has produced many Vermont surveyors, stopped offering its associate's degree in surveying three years ago.

The only college left in the area with surveying degrees is the University of Maine in Orono, Otis said.

Another problem, surveyors say, is that the profession isn't very visible.

"Most folks aren't aware of us until they need us," surveyor Rebecca Gilson said. She regularly works for Morristown. The 44-year-old would like to see new recruits, but she's at a loss for how to find them.

"I kind of fell into it," she said of her own career. "I answered an ad looking for a survey technician. All I knew was, it was outside and it was math, and those were two things I loved."

Eventually Gilson went to school for surveying — licensure in Vermont requires an associate's or bachelor's degree, or six years of experience — and started her own business. Her alma mater, White Mountains Community College in New Hampshire, ended its surveying program a few years ago, she said.

The profession also suffers from a lack of glamour, said Joe Flynn, chair of the regulatory Vermont Board of Land Surveyors. Surveyors often work outside; they get their hands dirty. But the job also requires intelligence, training and good judgment, Flynn said. He recalled mapping work that he was hired to do as a surveyor on the Colchester waterfront 15 years ago that eventually led to a court case over a land parcel boundary. The matter was settled by a deed description written by none other than a founding father of Vermont, Ira Allen, in 1804. Flynn's side was right.

"It proved my assumption on a boundary line," Flynn said. "I came home from work giddy that night."

Gilson, too, loves the history she comes across in her job — as well as the art.

"When you are making your maps and your plats, you're designing them, and everybody has their own artistic flair," she said.

She thinks more people would choose a career in surveying if they knew how much fun it is.

"It's a really well-balanced profession in that there's a little of everything — being inside, being outside, math, history, art," Gilson said. "Plus, there's the technology side — we're using GPS and [robotics]."

Otis keeps a logbook of all the places he visits as part of his job. He has happily spent hours in small planes visiting remote locations, and he once did a surveying job on a small Atlantic island that was closed to the public and populated only by thousands of seals. He likes knowing his work is essential.

"If you drive on a road or cross a bridge, there's a good chance a surveyor was involved. The infrastructure around you was underpinned by professional surveyors," Otis said. "Somebody needs to fill that role, and if it's not surveyors, then who best to do it?"

The Vermont Historical Society exhibition "A New American Globe," featuring three James Wilson globes and other related material, will open on July 2 at the Vermont History Museum in Montpelier. vermonthistory.org

The original print version of this article was headlined "Map Quest"