Vermont Stage Celebrates 15 and Looks to the Future 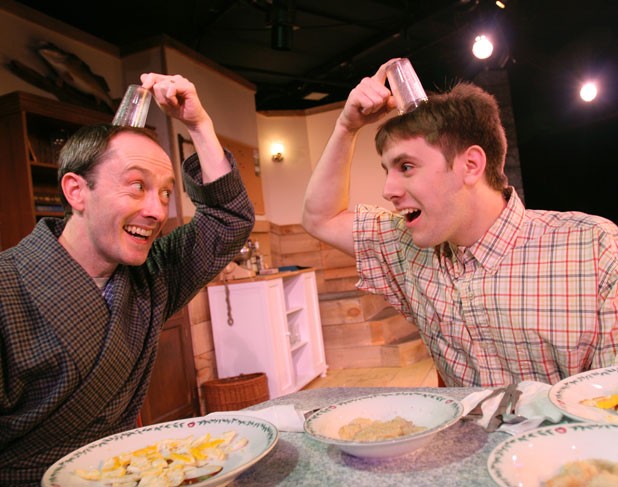 Tin and aluminum are the traditional, if slightly boring, gifts for a 10th anniversary. But Vermont Stage Company is opting instead for a “greatest hits” gala to commemorate the decade-long union of Burlington’s professional theater troupe with both its artistic director, Mark Nash, and its home stage, the FlynnSpace. The thespians who usually emote in the Flynn’s cozy basement storm its MainStage this Saturday for The Complete History of Vermont Stage Company (abridged). The festivities feature champagne and pastries at intermission, along with the chance to see your fellow Vermonters in “creative black tie.”

VSC quietly turned 15 last year. (For its first five years, the company performed in a variety of Burlington venues.) This past season, however, weathering the economic downturn took precedence over partying. Ticket sales remained strong, but donations — which provide 50 percent of the company’s budget — were dropping. Trimming the March production from a two-week run to a week of staged readings cut some costs. Small donors really stepped up to help avert a fiscal crisis. While the average size of gifts declined, the number of contributors ultimately increased 20 percent.

“This core of people who are willing to give smaller gifts,” says Nash, allows VSC “to go into this season projecting a pretty solid level of contributions.” And to plan “our most ambitious season to date,” he adds. Two shows will travel to Middlebury following their Burlington runs. “We believe it’s time to expand our audience base a bit,” he asserts.

For the gala, Nash penned a précis of 10 years in two acts. The first act looks back nine years; the second previews the upcoming season. The board urged Nash “not to miss this opportunity to celebrate what is kind of a remarkable achievement,” he recalls. Today, the VSC may seem like the big boys on Burlington’s theatrical block, but the troupe has survived a rather rocky decade. In fact, the company almost went under during the 2004-5 season. Only the über-generous gift of an anonymous donor saved the day.

Sounds like the script for a play. VSC’s recent history “makes for a pretty neat narrative arc,” Nash says. “A company starts out all plucky. Then it almost crashes and burns, and then it pulls itself back up by its bootstraps.” Nash weaves narration with scenes — “three- to five-minute little juicy plums” — from the audience’s favorite shows, such as Sylvia and King Lear. Original actors performing include out-of-town crowd pleasers Andrew Sellon, Donald Grody and Afton Williams, and local faves Bob Nuner and Kathryn Blume.

“A lot of the plays we do are [about] people struggling to overcome great odds and succeeding in spite of challenges,” Nash reflects. “That’s the shape I’ve given the story of VSC … I’d never been an artistic director before, and we were working in our first year in a theater that had never had a theatrical production in it before ... So we were starting from ground zero.” The gala’s final curtain call, with 100-plus artists who are VSC production vets, shows that the company has come a long way.