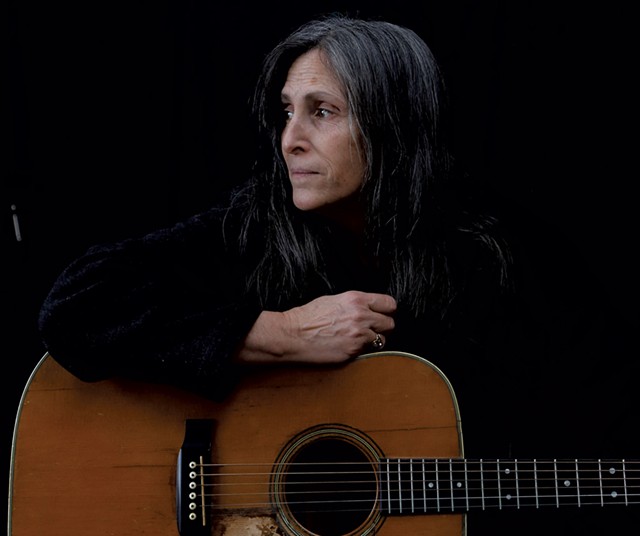 Kristina Stykos is an acclaimed singer-songwriter and a versatile multi-instrumentalist whose last album, River of Light, released on her Thunder Ridge Records label, was a 2018 highlight. She's a sought-after record producer whose off-the-grid Pepperbox Studio is highly in demand. She's also an entertaining radio host and an ace landscaper. With the release next week of her debut book of poetry, Ridgerunner: One hundred poems and photographs from rural Vermont, the multitalented South Washington-based artist adds another bullet point to her ever-growing résumé.

Ridgerunner comes out on Monday, December 23, from Shires Press, the indie imprint of Northshire Bookstore in Manchester. It's available in a hardcover version, with photographs taken by Stykos accompanying each poem, and in a less expensive, poems-only paperback.

The books' publication, made possible in part through a grant from the Vermont Community Foundation, marks the conclusion of a years-long process fraught with delays and revisions. Along the way, Stykos may have stumbled onto yet another accomplishment, albeit a curious one: She discovered a productive use for Facebook.

"I'd hate to be considered the poster child for using Facebook well," Stykos said with a laugh in a recent interview. "But, yeah, I think I did."

Every poem in her book is based on something she's posted on the social network.

"I have a pretty busy life, and most of my writing energy has gone into songwriting," Stykos explained. "But, oddly, whatever [energy] I've had left over has gone into Facebook, as stupid and goofy as it sounds."

Stykos traces the origins of Ridgerunner to 2009, when she started using Facebook. "I was determined to post something different, not just pictures of my dinner — stupid stuff," she recalled. "So I just started being poetic with what I put there." 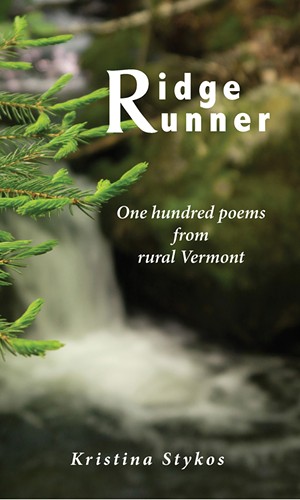 At first her posts were just stream-of-consciousness musings about her day: observations from walks through her woods, existential reflections on long drives into town. As her interest in photography grew, she began adding images to her posts. Before long, Stykos realized she was building "a sort of journal of thoughts and experiences.

"As a writer, you want to have raw material," she continued. "So you get used to just saving stuff, because sometimes it's a small fragment that can take you on a wonderful journey and end up as song or as poem."

The social network offered Stykos something more than the digital equivalent of a writer's notebook: instant feedback.

Stykos never logged on to Facebook specifically to write poems, she explained. Rather, her motivation was "the immediacy of being able to share [ideas] with people then and there." Her posts spurred conversation, "which is important because I live in the middle of nowhere," she said. "And if I didn't have that immediate kind of gratification, I probably would not be writing poetry."

When Stykos did finally sit down to write her book, she went through her Facebook posts, picked out the ones that interested her most and began whittling them into poems.

"I thought that sounded like a cool way to do it: Take this arbitrary number of 100 and see if we can hit the mark," Stykos said. "Those books have been some of my favorite poetry books and something I aspire to in my own writing — the simplicity and the use of images to convey something that's easily graspable by the reader."

Much as in her songwriting, in poetry Stykos favors simple language. Her poems are generally short and direct, evoking a rustic charm and reverence for her surroundings. "Boots," for example, is just three lines long: "Stone cold water / pours into my boots / a spring surprise." A photo of broken tree limbs in a murky pool, perhaps beside a muddy and swollen riverbank, accompanies the poem.

"A poem should be pretty stripped down," Stykos said. "It's like with a song, where sometimes you have the motivation to write it but you don't really know what it's about yet." In both poetry and songwriting, it's through the process of exploration and revision "that you finally get to an ending point," she added.

For the past few years, Stykos has suffered from spasmodic dysphonia, a debilitating vocal disorder. She said she finds poetry in some ways more creatively liberating than songwriting.

With the latter, Stykos observed, "you might think of some great words, but then if you can't sing it, you've gotta ditch the words." Writing poetry, she said, "is so different because you can keep whatever you want.

the trees bent into it

we climbed over things

making for the brook,

into muck, and clumps

not sure what to make of

so far from home.