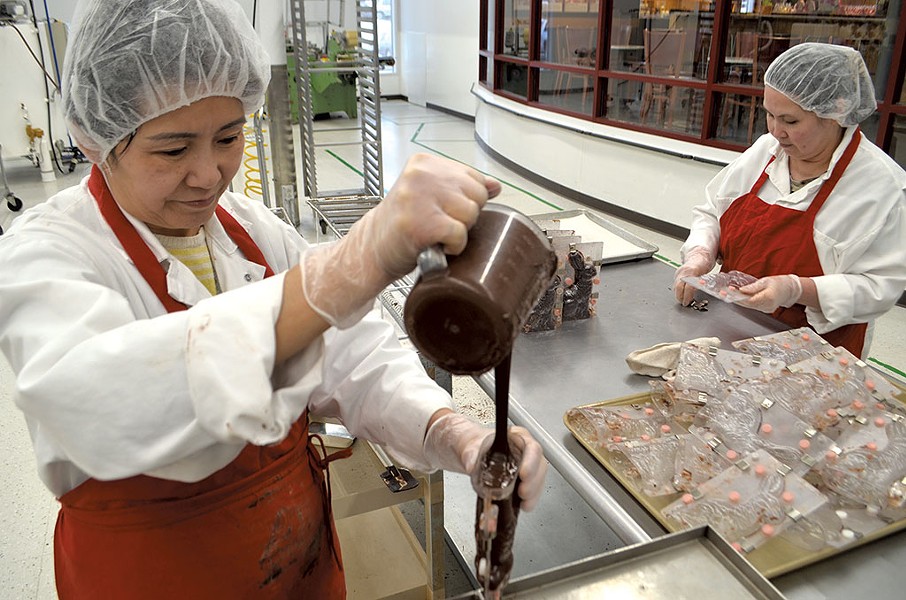 Gov. Phil Scott's plan to reimburse remote workers up to $10,000 to move to Vermont generated plenty of publicity last year, sending the message far and wide that the state is eager to attract new residents.

"Vermont could be a model state when it comes to having an employment culture that is welcoming to people from other backgrounds," Ashe said after meeting last month with Chittenden County firms that hire immigrants. "The employers we spoke to said this was critical, and if we don't do it, we're going to be in a bad way in the future."

The state's workforce has contracted by 6 percent in the last decade, according to the U.S. Department of Labor, making it more difficult for employers to fill jobs and constraining economic growth. The state has tried to boost the workforce by recruiting skilled workers, spending more on job training, and encouraging employers to hire workers with criminal records or in recovery from addiction.

"The governor keeps saying he wants to bring people here. Well, helping New Americans transition into our workforce should be an obvious and important part of that effort," said Sirotkin, who chairs the Senate Economic Development, Housing and General Affairs Committee.

Sirotkin's panel is expected to take up proposals in the coming weeks that would make it simpler for employers to tap state funds for English language education, highlight best practices in workplaces and find ways to keep those who settle in Vermont from leaving for less expensive areas of the country.

These and other ideas follow a roundtable discussion that Ashe and his colleagues convened last month with Chittenden County employers and social service groups that work with immigrants.

One of those employers is Lake Champlain Chocolates, the Burlington-based company that for decades has hired New Americans through the Vermont Refugee Resettlement Program. The firm began hiring Vietnamese refugees in the 1990s, and today a quarter of its 150 workers are New Americans, according to Fran Tobin, director of human resources.

The company helps its workers succeed by paying for English language classes, providing flexible vacation schedules to make foreign travel easier and allowing workers to take time out of the workday to celebrate holidays like Tet, the Vietnamese New Year.

These efforts have helped the company build a stable, reliable workforce — one many firms would envy, Tobin said. By contrast, her colleagues at other companies, especially manufacturers, are facing a recruitment and retention crisis.

The reasons are numerous and may seem intractable. They include a lack of affordable housing, limited public transportation and young workers' disinterest in performing repetitive tasks, Tobin said.

But there are barriers on the employers' side, as well. Some managers still believe immigrants require "an onerous amount of attention and special accommodation" to succeed in the workplace, Ashe wrote in a letter to colleagues.

Tobin maintains that publicizing the success that businesses like Lake Champlain Chocolates have had employing hardworking immigrants could help Vermont companies prosper. "Anything that state and local agencies can do to dispel the myths and fears about hiring New Americans is crucial," she said.

Companies such as Twincraft Skincare in Winooski and Rhino Foods in Burlington are finding their ability to grow directly related to how well they attract immigrant workers.

"We just hired 30 people in the past few months, and I don't think that would be possible if we were not an employer of choice for New Americans," Rhino Foods owner and president Ted Castle said.

Beginning with a few Bosnian refugees in the 1990s, the company's foreign-born workforce has grown to more than one-third of its 210 employees.

One idea to help employers overcome a reluctance to hire immigrants is to establish a "readiness certificate" program for New American workers. Another is to create a similar certification program to recognize companies committed to building a diverse workforce.

The more than 8,000 immigrants who have settled in Vermont through the federal refugee program have mostly put down roots in Chittenden County — particularly in Burlington, South Burlington and Winooski. But the need for reliable, skilled workers is felt across Vermont, Ashe argued. 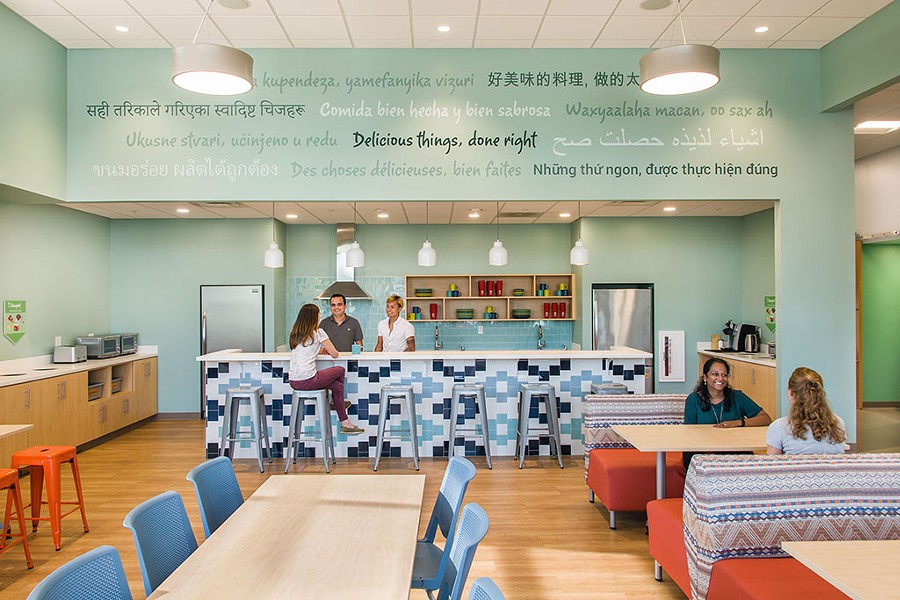 "This is really a statewide opportunity over time, because many manufacturers are struggling to find people for those repetitive skilled positions," he said.

The need for workers isn't limited to manufacturing. Demand for professionals is strong, especially in medical fields. But language barriers and licensing requirements force many immigrants with professional training in their home countries to take lower-skilled jobs, according to Pablo Bose, an associate professor in the geography department at the University of Vermont who has studied immigrant communities nationwide.

"You're bringing a lot of people in who actually have a lot of skills that go unrecognized," Bose said. "You see this all the time. It's a total waste of human capital."

Someone with a medical degree from another country might have to accept a medical technician position in Vermont — not because his or her training is lacking, but because the state's licensing requirements are onerous, Bose said.

Reforming such licensing to reduce unnecessary or overzealous regulation is another component of the Senate initiatives.

Organizations the state hires to conduct licensing tests have at times overstepped their authority and, in the process, raised unnecessary barriers for immigrants, according to Gabe Gilman, general counsel for the Vermont secretary of state.

For example, the state Office of Professional Regulation found that the out-of-state firm that conducts tests for cosmetology licenses had English-only exam requirements the legislature never intended, Gilman said. The firm refused to provide exams in other languages, prohibited the use of interpreters and foreign language dictionaries, and even prevented applicants from using products not labeled in English.

"It's kind of an example of mission creep by people who have good intentions," Gilman said. "But we need to make sure we're not delegating decisions that ought to be made by the General Assembly."

Ashe has asked Sen. Jeanette White (D-Windham), chair of the Senate Government Operations Committee, to explore ways to bridge the differences between the licensing requirements of other states and countries and Vermont's.

A similar initiative last year established "licensing reciprocity," allowing veterans to more easily receive comparable civilian licenses in the state, according to Dustin Degree, the governor's director of workforce expansion. "We do have a very tight labor market, so adding folks to that, especially skilled folks, is always good," Degree said.

Of the 28,000 Vermont residents in 2016 who were foreign-born, the largest group was not from Vietnam or Nepal or Bhutan, but much closer to home, Gilman wrote in a recent report on ways to reduce employment barriers faced by immigrant professionals.

"Canada is the single largest contributor of immigrants to Vermont," Gilman wrote.

Given that 20 percent of Vermont's immigrants hail from its northern neighbor, making it easier for licensed Canadian professionals to receive comparable state accreditation would be "low-hanging fruit" for reform, he said.

While most businesses recognize that foreign-born employees are vital to their growth, Vermont hasn't always welcomed them, said Dan Barlow, a lobbyist for Vermont Businesses for Social Responsibility. He recalled how a 2016 plan to relocate roughly 100 Syrian refugees to Rutland had the full support of the business community but fell apart over local concerns about competition for jobs.

The Senate Transportation Committee, which oversees the Department of Motor Vehicles, is expected to tackle another common barrier to employment: the ability to obtain a driver's license. Driving ability and English language proficiency have little relation to one another, and yet the application and testing process can create obstacles for English language learners, Ashe said.

Much like the cosmetology licensing company, the DMV does not allow interpreters to assist applicants in on-the-road driving tests. Other states have found ways to accommodate that need, and Vermont should explore doing the same, Ashe said.

He also suggested "cultural competency training" for all DMV employees. Employers have relayed to him that their workers at times face "inhospitable customer interactions" with department employees.

The DMV processes 1 million licenses, permits and vehicle registrations for Vermonters every year and cares about its customer service record, according to Wanda Minoli, the DMV commissioner. The organization is open to offering tests and applications in more languages. There are, however, safety concerns about having a translator relay commands from an examiner in a road test. The department is nevertheless willing to take a look at how other states conduct such tests, she said.

Studies of immigrant groups in Vermont have shown that while many initially rely on public transit to get to and from work, they universally aspire to own cars, Bose said. In a state with limited transit networks, not having a vehicle or driver's license can directly impair a person's ability to accept a job — and, in the case of many immigrants, a second or third job, Bose said.

These and other measures are more likely to help keep immigrant workers already in Vermont from leaving than entice new ones to move to the state, Bose said.

Such secondary migration is a real concern, according to Caitlin Goss, Rhino's director of people and culture. Two excellent Nepalese employees just moved to Rochester, N.Y., in part because housing is more affordable there.

By offering programs such as no-questions-asked payroll loans up to $1,000, social services coordination and celebration of nontraditional holidays, the company hopes to remain competitive for workers.

"We take a lot of pride in how we treat our people and how we engage with them and their families," Goss said.

"But it will send a message to the network of New Americans elsewhere that Vermont is the kind of place that if you go, they will understand how to make your employment successful," he said.