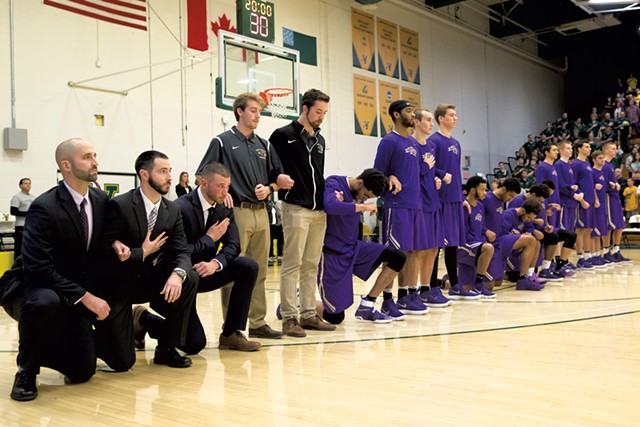 Coaches who are running tryouts for winter sports at South Burlington High School this week are themselves being coached on how to respond if student athletes decide to "take a knee" during the national anthem before games. As the protests against racial injustice spread from the National Football League to local sporting events, high school and college officials are preparing for trickle-down.

The First Amendment protects the protesters, and there should be no effort to suppress them, SBHS principal Patrick Burke and student activities director Michael Jabour wrote in an email Monday to coaches, officials and athletes.

I personally think it’s their right to take a knee.Sophia Robinson-Yari tweet this

They also spelled out when school officials can cry foul: "Fans who do not follow our school's expectations regarding appropriate conduct will be confronted and may face ejection from our events."

Burke said the reminder was necessary because of the reaction when several black members of the Saint Michael's College men's basketball team and their three white coaches got down on one knee during the anthem before an exhibition game against the University of Vermont on November 4.

Some of the mostly white fans at UVM's Roy L. Patrick Gymnasium booed and jeered at the players to "stand up." Others in the crowd defended the athletes and their right to protest, but they were in the minority, video footage of the event showed.

After Seven Days posted the video on its website, some St. Michael's alumni vowed to stop donating money to their alma mater, calling the protest deeply unpatriotic and insensitive to veterans. Other alumni praised the protesters for their bravery and said they would donate more.

Nearly a month later, the issue hasn't gone away — in Vermont or elsewhere. NFL football player Colin Kaepernick was the first to take a knee in late 2016 to protest oppression and police brutality against African Americans. Other players on high-profile sports teams have since followed the biracial quarterback's lead, often generating outrage from fans. President Donald Trump has repeatedly urged the NFL to fire players who fail to stand during "The Star-Spangled Banner."

On Monday, the St. Michael's basketball team defended its actions. While its 14 members and their head coach, Josh Meyer, declined to be interviewed, the group issued a written statement about what motivated their protest.

"We took a knee to draw attention to the daily injustices that African Americans face due to the color of our skin," it read. "Among our areas of concern are encounters with police and other citizens, failures of the educational system, negative imaging in mass media, and lack of employment opportunities. We want to make it clear that the kneeling has nothing to do with the flag or the military."

The statement went on: "We are American citizens with a desire to improve our country. We want to ensure that we are included when we speak of 'Liberty & Justice for All!' We understand that some people disagree with our method of protest, and we welcome conversation to work towards a solution. We are saddened by the hateful remarks directed at us, such as 'Go back to Africa' and other hostile comments during and since our peaceful protest."

The team's full-throated explanation contrasts with the silence from the Middlebury College football players who took a knee before at least one of their games this fall. They didn't return phone calls or other messages seeking explanation. Sarah Ray, Middlebury's director of media relations, declined to comment on the reaction to the protest. "It's an individual matter," she said. "We support all our student athletes."

At the high school level, the Vermont Principals' Association is offering guidance, saying the protests are a form of free speech and, as long as they are not disruptive, should be allowed. While pro athletes may be subject to contracts or other private-sector considerations that limit free speech, athletes in public schools are not, according to Jay Nichols, VPA executive director.

Burke and Jabour, who have been communicating with officials in other districts, shared their memo with athletic directors at schools including Champlain Valley Union High School in Hinesburg and Jericho's Mount Mansfield Union High School. Burke said he doesn't know of any SBHS athletes who have taken a knee this year.

The conversation started "because of what happened at St. Mike's and UVM," Burke said, and what some would view as "verbal abuse" of St. Michael's players by people who were in the stands. "My concern there is that, whether it's a kid on my team or a kid on another team, when they are at events that are school activities, they are free from verbal abuse from the fans. That's our policy straight up."

Federal law is on their side, too — specifically, a 1969 Supreme Court ruling known as the Tinker decision that upheld the right of three Iowa teenagers to wear black armbands to school in protest of the Vietnam War. It shaped the policies that continue to protect free speech in public schools.

But exercising those rights isn't always easy — or comfortable.

"It's such a touchy situation, such a hot topic right now, but we also understand and recognize, along with the VPA, that every student has the right to protest," said Jabour.

Both he and Burke are urging coaches to ally themselves with students so everyone knows whether and when a protest is planned. The idea is to better prepare athletes for the spotlight, they said, and the media attention that comes with it.

After the dramatic exhibition game with St. Michael's, UVM men's basketball guard Skyler Nash, a freshman from Chicago, tweeted that he was unhappy about how the crowd treated the protesters. He warned that there might be a response from his team at its next home game, which was against University of Maine at Fort Kent on November 22.

Sure enough, all the players on the UVM team linked arms and bowed their heads during the anthem. "We came together as a team and decided to lock our arms and bow heads as a sign of support not just to St. Mike's but the larger protest as a whole," Nash explained in a direct message on Twitter to Seven Days a few days after the game.

There was no visible reaction from the crowd at UVM, in contrast to the jeering and shouts that broke out on November 4.

Administrators at both colleges have weighed in since that divisive display. UVM athletic director Jeff Schulman emailed season ticket holders to say athletes deserve to play in an environment free from threats and harassment. UVM president Tom Sullivan echoed the sentiment in a campus email, calling for respectful and civil behavior at Patrick Gymnasium.

At St. Michael's, president John "Jack" Neuhauser posted a conciliatory statement on the college website on November 10, six days after the game. He attempted to walk a line between defending the free speech rights of the athlete-protesters and assuaging the feelings of those who were offended, especially veterans.

Neuhauser wrote that he did not believe the protests were meant to show disrespect to the flag or to veterans, but he recognized that others might see it differently. "We cannot and will not endorse disrespect for the flag or for those who serve all of us and, in previous generations, actually sustained the college in difficult times," he wrote.

He declined to be interviewed and said through a spokesperson that none of the coaches were sanctioned for participating in the protest, nor were students. Some donations might be lost in the short run, according to St. Michael's director of marketing and communications Alessandro Bertoni.

"I personally think it's their right to take a knee," said first-year student Sophia Robinson-Yari as she sat in the college dining hall on November 21. The protests are an effective reminder that not everyone enjoys equal rights in this country and there's work to do, said the 19-year-old from New Durham, N.H. "I support it personally," Robinson-Yari said. "I think it's very brave of them."

Charles Thompson, a St. Michael's sophomore from Baltimore, observed the riots that broke out in his home city following the death of 25-year-old Freddie Gray, an African American who died of a broken neck in 2015 after being taken into police custody. Gray's death become a symbol of institutionalized racism and helped build momentum for the Black Lives Matter movement.

Players are using their public presence to keep an important issue alive, Thompson said, and it's working: He said students and professors have discussed the issue in classrooms.

"It's provoking attention," Thompson said. "And that's the goal, I believe."