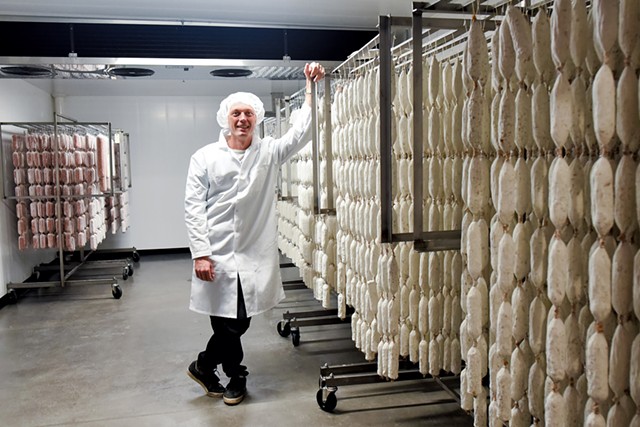 The historic Homer Fitts department store building on Main Street in Barre is the new home of Vermont Salumi, a locally owned charcuterie company whose products are sold at various Vermont co-ops and specialty stores.

Owner Peter Colman started in 2011 with a line of fresh sausages made at Cate Farm in Plainfield; he's been producing Vermont Salumi's line of dry-cured salamis at Waitsfield's Mad River Food Hub since 2014. The new space, from which the business has been operating for six weeks, will allow him to increase production from 2,500 to 45,000 pounds of product at a time, he said.

Temperature and humidity control are essential to the proper aging of meats, and having its own aging rooms will enhance Vermont Salumi's efficiency and output, Colman explained. "The space is way bigger than what we need," he said, "but everybody said, 'Get as much space as you can,' and I think we'll fill it up faster than we expect."

The main part of the building is 50 by 200 feet and "wide open," which Colman called ideal from a production standpoint. "I think we have the sexiest meat plant in the United States," he added.

A retail space with a deli counter and wine bar is also in the works. "Barre is such a manufacturing town that it's been hard to have an open space that big on Main Street," Colman said. "We're hoping that something mixed-use like this will be perfect."

Colman is excited to connect to Barre's Italian American history with his prosciutto, salami and other traditional aged meats. "So much of food is nostalgia, and I can see it makes people happy that we're trying to bring back part of that culture," he said.